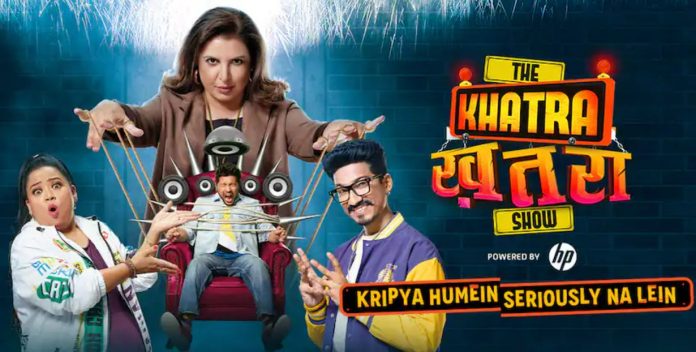 The Khatra Khatra Show Upcoming Harbhajan-Geeta and Karan-Ankita get grilled Voot’s first interactive and comedy game The Khatra Khatra Show is back with its new season. Hosted by ace artists Haarsh Limbachiyaa and his comedian wife Bharti Singh promises double the fun and entertainment where the celebrities suffer and audiences enjoy seeing them perform the games. The winners are spared but the ones who lose receive punishments. The unique game show had a successful opening with Bollywood actress Jacqueline Fernandez making a grand entry on the Maha Premier and impressing everyone with her swift moves. Film director and choreographer Farah Khan is the new entrant in the show and will be seen every Friday as a special host where the celebrities have to go through Farah’s challenges.

Popular television celebrities Vishal Aditya Singh, Karan Kundrra, Nishant Bhat, Punit J Pathak, Munmun Dutta entered the show and tickled the funny bones of the audiences while performing equally well. Actress Parineeti Chopra also got the taste of the Khatra factor when she was welcomed on the ice by Haarsh, Bharti, and Farah. Last week Haarsh and Bharti decided to celebrate couple’s week and invited the audience’s favorite couples to compete against each other. Bigg Boss 15 fame couple Umar Riaz and Rashami Desai gave a tough competition to Bigg Boss 9 winner Prince Narula and actress wife Yuvika Chaudhary. The couples played the games enthusiastically and entertained the fans with their chemistry.

Gracing their presence on the show this week will be former cricketer Harbhajan Singh with actress wife Geeta Basra. Farah Khan along with Haarsh and Bharti will make the couple give a test of their love, fitness, and energy along with huge amounts of humor. TV’s another well-known couple actor Karan Patel and actress wife Ankita Bhargava Patel will be seen having a lot of fun playing games while pulling each other’s legs.

Not to forget the newly formed connection between Bigg Boss 15 runner-up Pratik Sehajpal and South actress Nikki Tamboli will set the stage on fire with their oomph factor. The slogan of the show goes “They must not be taken seriously” which remains true to its words and offers pure joy and elements of surprises with each episode. On your gloomy days, The Khatra Khatra Show can surely bring a smile to your face and keep off your sorrows. To find out more interesting updates of this show stay tuned and keep reading this space for more such upcoming episodes.