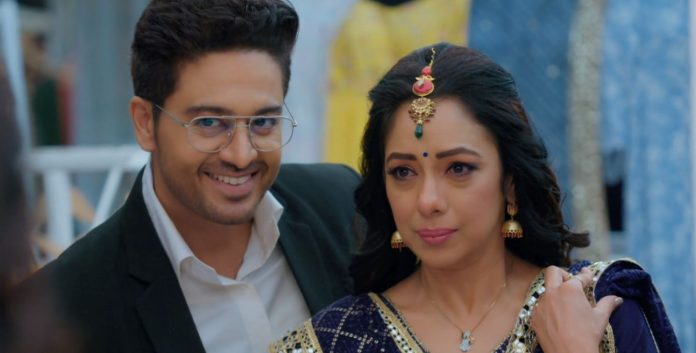 Anupama 24th March 2022 Written Update Anuj returns The host announces the next performance as no one from the audience came on stage to showcase their talent. A staff member comes and tells something to Samar. Samar gets worried hearing what the staff member told him. Seeing Samar, Shahs get worried. Worried Devika and Samar run to Anupama telling Baa that there is some issue with Anupama’s costume. On the way Devika asks Samar what happened to Anupama. Samar tells Devika that a staff member (volunteer) told him that Anupama freezed in shock after screaming Anuj’s name.

Guard stops Devika and Samar from entering the green room as per rules. Samar tells the guard that his mother is inside. Guard asks Samar to call his mother outside by calling her. Samar and Devika tell the guard that their dance competition’s volunteers sent them here. Guard asks Samar and Devika to bring that volunteer in front of him first. Other volunteers/staff members ask Anupama if she is fine? Devika distracts the guard by asking him to make her meet/talk to his senior. Samar uses this opportunity and runs to Anupama. He gets worried seeing Anupama shivering in shock. Samar asks volunteers what happened to his mother.

Volunteers tell Samar that Anupama fell down and suddenly went into shock seeing the aalta fallen. Samar continuously asks Anupama what happened to her. Anupama takes Anuj’s name again and again. Samar tries calling Anuj but finds his contact number unreachable. Hearing this, Anupama tells Samar that something has happened. She says she hasn’t talked to Anuj for a long time. Devika comes and tries to calm Anupama. Anupama keeps shivering and saying that something has happened. Devika asks Anupama to come back to her senses as it’s not needed to always think negatively. Anuj still remains unreachable. Devika calls inspector Sinha for help.

A girl’s performance is going on. Baa asks Rakhi to dance, saying that she may have some other talent besides pouring poison in people’s lives. Vanraj smirks and Kavya laughs. Rakhi tells Baa that she doesn’t dance but instead makes people dance to her tunes. Baa jokes with Rakhi. Unaware of the truth, worried Kinjal and Bapuji hope that everything is fine with Anupama. Anupama sees Anuj. She asks him where he was as she was waiting for him. Anupama tells Anuj that she got very scared. She apologizes to Anuj for her behavior with him last night. Anuj tells Anupama that she could have shared her problem with him but she instead increased both of their problem.

He tells Anupama that he made him have bad feelings and thoughts. Anupama apologizes to Anuj. Anuj stares at Anupama. Anupama doesn’t let Anuj go away from her by holding his hands tightly. She asks Anuj to come back for her and not punish her this way. Anuj makes Anupama leave his hand and goes away. Anupama cries and keeps asking Anuj to not go away leaving her. This turns out to be Anupama’s dream. As the dream ends, Anupama starts running and screaming to stop Anuj. Worried, Samar and Devika run behind Anupama. Another girl is seen performing on stage. Samar and Devika stop Anupama. Anupama asks Devika and Samar to let her go to Anuj.

The girl’s performance ends and Kavya says that she could have performed better than this. She tells Baa that she should have participated in the competition. Vanraj says after one performance Anu Ji will perform. Rakhi asks Vanraj why he seems impatient to watch his ex-wife’s performance. She also asks Vanraj about Anuj’s whereabouts. Vanraj says he is wondering the same thing that why Anuj didn’t arrive till now. Baa says it’s good if Anuj doesn’t arrive. Vanraj asks Baa to let Anuj come as otherwise how will Anupama (Radha) perform. Kavya requests Vanraj to not say anything ill about Anuj and Anupama.

Vanraj goes silent. Devika asks Anupama to calm down as she doesn’t know where Anuj is. Anupama says she will find Anuj anywhere. She tells Devika that she needs to go to Anuj as something has happened to him. Samar asks Anupama why she is thinking negatively as maybe Anuj’s phone’s battery would have gone dead. Anupama remains uncontrollable. Samar asks Anupama to come with him as the next performance is hers. Anupama says that she won’t even be able to breathe till she sees Anuj. Devika asks Anupama if she will break Anuj’s dream by not performing in the competition. Anupama recalls Anuj’s encouraging and motivating words.

Samar and Devika request Anupama to not think so negatively. They request Anupama to not break Anuj’s dream. Samar tells Anupama that Devika has contacted police to get help in tracking Anuj. Devika gives Anuj’s swear to Anupama to make her perform. Anupama recalls Anuj’s words again asking her to perform at any cost. On the other hand, the inspector tells someone on call that they didn’t know anything about Anuj Kapadia till now. After disconnecting the call, the inspector sees Anuj’s car which met with an accident. A dead body is taken from nearby Anuj’s car. The inspector asks his junior to call Anuj’s family to identify the dead body.

Samar asks Anupama to go on stage. Anupama leaves for the stage. Devika gets a call from the inspector. The inspector informs Devika about the accident and says that nobody is left alive. Samar also hears everything. Both Devika and Samar go into shock. Anupama takes the stage’s blessings. Vanraj thinks it’s strange that Anuj didn’t arrive on Anupama’s most important day. Samar and Devika see Anupama from backstage. Anupama thinks to perform for her love Anuj. Devika asks Samar to calm himself. Samar says and asks why bad happens with his mother only.

Anupama starts performing. In between her performance, she searches for Anuj in the audience. Tears dwell in her eyes by not seeing Anuj. Vanraj smirks seeing Anupama’s sadness. Anupama continues performing on the song, “Mere Dholna”. Rakhi asks Vanraj if he can’t keep his eyes off Anupama. Rakhi’s words angers Kavya while shocks Baa. She tells Vanraj that she is seeing Anupama dancing so passionately for the first time. Rakhi says it seems that Anupama is dancing by hiding some big pain in her heart. Vanraj says according to him this pain’s name is Anuj Kapadia. Rakhi laughs and Vanraj smirks.

Anupama dreams about and sees Anuj everywhere on stage, in the audience and even behind the audience. To hide their painful expressions from Anupama, Devika and Samar run inside from backstage. Anupama notices them and falls while twirling and dancing. Everyone gets worried for Anupama. Samar and Devika return backstage.

In the next episode, Anupama will be seen dancing on the song, “Aaja Ve Mahi, Tera Rasta Udeek Diyan”. Anuj will for real reach Anupama’s dance competition. Anupama will announce her and Anuj’s wedding on the stage. This news will shock Baa, Vanraj and Rakhi. Anuj, Samar and Bapuji will be happy seeing and hearing Anupama’s final decision.