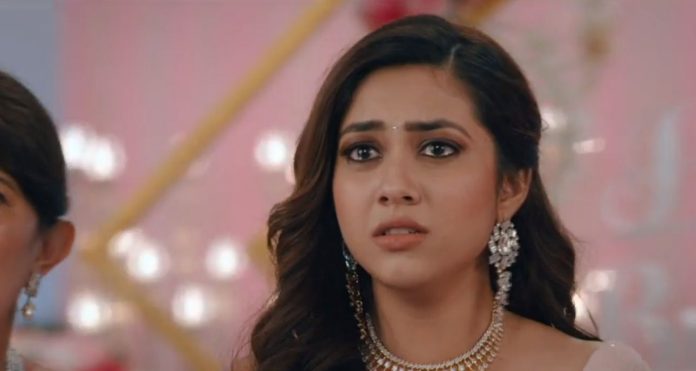 Fanaa 23rd March 2022 Written Update Emotional surprise Pakhi asks Agastya where he got lost suddenly. Agastya tells Pakhi that he was thinking something about work. Pakhi stands up to bring something for Agastya. A man asks Pakhi why she is ignoring him. Pakhi gets angry at that man. She tells the man that he shouldn’t consider girls weak. She scolds him a lot. Agastya feels very angry but controls himself. He stands up and takes Pakhi outside to the car. Pakhi asks Agastya why he stopped her as she would have broken that cheap man’s face.

She stops Agastya from beating the cheap man to death. Pakhi asks Agastya if he would have killed the cheap man. She tells Agastya that she can’t recognize if he is really her best friend. Agastya apologizes to Pakhi and asks her to understand him. He tries to stop Pakhi by telling her that he can’t see anyone troubling or harassing her. Scared and shocked, Pakhi leaves warning Agstya to not try calling her. Agstya reaches his home and wonders why everything is going wrong today. He goes to check his secret room in the basement. After reaching the basement, he sees Sameer still tied up. He asks Sameer if he tried escaping his captivity.

Sameer signs Agastya that he didn’t try running away or escaping. Neelima comes from behind Agastya and catches him red handed. Agastya gets shocked seeing that Neelima got to know his secret. Neelima asks Agastya, how he can deceive the girl (Pakhi) he loves. She also asks Agastya why he did all this to Sameer and Pakhi. Agastya tries to explain to Neelima that he did all this to get his love Pakhi. Neelima asks Agastya if he will get Pakhi’s love by hurting her father. Agastya tells Neelima that he is taking proper care of Sameer’s hygiene and food. Neelima angrily explains to Agastya that when people adopt pets they give him love with food and hygiene.

Agastya requests Neelima to understand and support him by keeping his secret to her only. Neelima gets angry and asks Agastya to tie her too with Sameer to keep his secret hidden. She tells Agastya that she can support or help the wrong person if the person is even her beloved grandson. Neelima reminds Agastya that she supported him till now in his small wrong works and lies but can’t support him in all this. She gives two days to Agastya to let Sameer go from his captivity. This makes Agastya worried. He tells Neelima that he can’t do this as this way Pakhi will get to know his truth. Neelima tells Agastya that if he will not let Sameer go, she will reveal his reality to Pakhi.

Agastya agrees to let Sameer go. Neelima leaves apologizing to Sameer for Agastya’s behavior. Agastya wonders why all the wrong things are happening with him in one day only. At night, Agastya sees Pakhi upset with him and ignoring him. He asks Pakhi till when she will remain angry with him. Pakhi asks Agastya why he grew so furious at the restaurant. She also asks Agastya if this is the way to help someone or teach a lesson to someone. Agastya tells Pakhi that he failed in controlling his anger and asks her to forgive him. Pakhi tells Agastya that he became unrecognizable to her today. She asks Agastya if he will again beat someone to death if someone harreses her. Agastya gets angry and tells Pakhi that he will surely kill someone harassing her. Hearing Agastya’s different angry voice Pakhi gets scared.

Agastya asks Pakhi what she would have done if anyone would have tried to hurt him. Pakhi tells Agastya that she will never act the way he acted. She continuously asks Agastya why he did wrong. Agastya tells Pakhi that he did all this because he loves her. Pakhi goes speechless and shocked. Later Pakhi is seen talking to Shanaya about the restaurant incident. Shanaya asks Pakhi to forget it and forgive Agastya as he just became protective of her. She also tells Pakhi that she should be happy as Agastya behaved like her favorite romantic movie hero for her. Pakhi tells Shanaya that she never saw this side of Agastya in their years of friendship. She says that she wonders how Agastya hid this side from her for many years.

Shanya tells Pakhi to calm down and tells her that their father wanted to get her (Pakhi) married to Agastya because he may have seen his love for her. On the other hand, Neelima reminds Agastya that he has less time left to free Sameer from his clutches. Later, While driving the car Agastya recalls Neelima’s words as well as his fight with Pakhi. He suddenly meets with a small accident. At home, the doctor tells Neelima that Agastya is fine but refuses him to apply medicine and bandages to his back wounds. Pakhi returns to Raichand house. Mona taunts Pakhi for staying at her maternal house for long, forgetting her in-laws.

Ignoring Mona’s taunts, Pakhi runs to see Agastya’s condition. Seeing Agastya facing difficulty in applying ointment to his wounds, Pakhi comes forward to help Agastya. Agastya refuses Pakhi’s help and wears his shirt to hide his burns. Pakhi tells Agastya that Neelima told her everything. Agastya gets scared and asks her what Neelima told her. Pakhi tells Agastya that she knows about what his stepmother did with him in his childhood. She also tells Agastya that being his best friend, she has the right to care for him. Agastya lets Pakhi apply ointment to his wounds. Pakhi cries seeing Agastya new and old wounds. Agastya asks Pakhi if Neelima told her something else too. Pakhi asks Agastya if Neelima has something else to tell her. Agastya replies no.

Reviewed Rating for Fanaa 23rd March 2022 Written Update Emotional surprise: 4/5 This rating is solely based on the opinion of the writer. You may post your own take on the show in the comment section below.