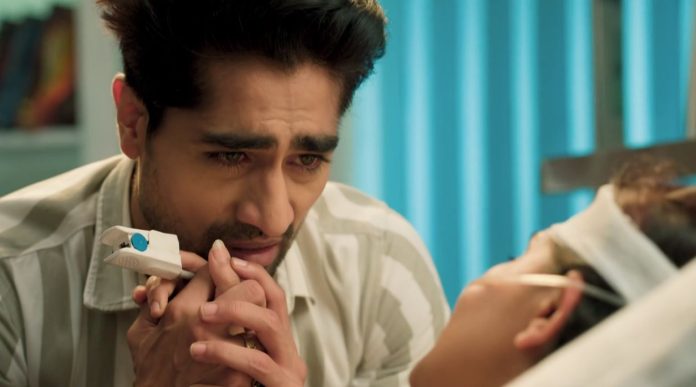 Suhasini opposes Akshara and Abhimanyu’s decision of postponing their marriage. Swarna and Manish ask Suhasini what she is saying? Anand asks Suhasini what problem she has with Abhimanyu and Akshara’s decision. Suhasini says she has more experience of life than everyone present here and has seen many ups and downs. She also says that because of her experience, she doesn’t see, think or make one-sided decisions like their children. Suhasini says she is saying this after thinking about every aspect. Harshvardhan tells Suhasini that he accepts that she has more life experience.

He says that they know about their own family more than her. Harshvardhan tells Suhasini that Manjiri is an important part of their family and this marriage can’t happen without her. He says Abhimanyu can get married in his father’s absence but not in his mother’s absence. Harshvardhan asks Suhasini to question Abhimanyu’s decision. He also asks Suhasini why she is being stubborn. Suhasini says she is not being stubborn but has a fear in her heart and mind. Her words shock Abhimanyu and Akshara. Suhasini says everyone knows how many obstacles are already coming in Akshara and Abhimanyu’s marriage.

Harshvardhan asks Suhasini what she means. He tells Suhasini that she is getting superstitious now and asks her to not give importance to all these superstitious things. Both Goenkas and Birlas get into an argument and call each other stubborn. Abhimanyu and Akshara try to stop their elders’ argument. Elders ask Abhimanyu and Akshara to not interfere in between the elders’ talk. Harshvardhan tells Goenkas that they just want to get off from Akshara’s responsibility by getting her married. His words shock Goenkas. Manish asks Harshvardhan what he is saying.

Harshvardhan says he is talking right. He tells Goenkas that they don’t care about Manjiri and her condition. Akshara witnesses that it’s 11:11 (her Angel’s time). She thinks that Goenkas and Birlas won’t reach any decision by arguing this way. Akshara prays to God to do something to end her both families arguments. At the same time, Manjiri gains little consciousness. She takes Abhimanyu and Akshara’s name. Nurse notices this and runs to call Abhimanyu. Manjiri recalls Abhimanyu and Akshara’s Tilak Ceremony. Mahima asks Goenkas if they would have done the same thing if a similar incident had happened at their home and family.

Suhasini replies that they would have done what is right. She says that the right thing is that Abhimanyu and Akshara’s marriage shouldn’t get postponed. Suhasini explains to Mahima that many difficulties and problems arise in life but a person should not back down from them by getting scared. She further explains to Mahima that a person should move on in life by fighting all the difficulties and problems that arise in their life. Suhasini asks Mahima to never say that incident happened in their family as now it’s all of them’s family. Mahima asks Suhasini if she considers their family as hers, then why they are not understanding their problems and sentiments.

Suhasini says she hasn’t announced a one-sided decision but has just kept what is in her heart. She asks everyone to make a decision as they please and she will accept it. In her thoughts a scared Suhasini wishes Abhimanyu and Akshara’s marriage to happen soon. Before Suahsini could announce the postponement of marriage, a nurse distracts everyone. She informs that Manjiri has gained consciousness. This news makes everyone except Aarohi happy. Nurse says Manjiri is repeatedly taking Akshara and Abhimanyu’s names. Everyone asks Abhimanyu to go to Manjiri quickly. Hearing Anand saying that hopefully Manjiri will get well soon, Aarohi grows panicky.

Abhimanyu meets Manjiri. Both mother and son caresses each other. Outside the ward, Goenkas discusses why Birlas feel that they don’t care about Manjiri. On the other hand, Harshvardhan tells Anand and Mahima that Goenkas doesn’t care about Manjiri and wants to get Akshara married as soon as possible. Gonekas hope that Akshara and Abhimanyu’s marriage won’t get postponed now as Manjiri has gained consciousness. Swarna says now they will get to know who hit Manjiri and how. Hearing this Aarohi gets worried thinking if Manjiri saw her hitting her with her car. She fears that Manjiri may tell Abhimanyu everything about her.

Abhimanyu comes outside and tells everyone that Manjiri is stable and better than before. This news makes everyone except Aarohi, relaxed and happy. Abhimanyu reveals to everyone that Manjiri told him that just before the accident, she saw that only she isn’t present in his and Akshara’s engagement. Flashback shows Manjiri requesting and giving Abhimanyu her swear to get married to Akshara as soon as possible. She explains to Abhimanyu that there is no guarantee of anyone’s life and problem occurrence. Abhimanyu recalls Suhasini’s words explaining that a person should move forward and face all their problems instead of backing down.

Goenkas and Birlas decide to prepare for and handle the engagement ceremony together. Aarohi relaxes thinking that Manjiri saw nothing. Abhi apologizes to the inspector for his last day’s behavior with them. Inspector promises Birlas and Goenkas that he and his team will soon reach the accident truth. Aarohi grows more panicky hearing this. Abhimanyu sends the inspector to talk to Manjiri about her accident to get some clue. Aarohi grows frightened when Abhimanyu says that he will surely get the person punished, who hit his mother and ran away. Akshara notices that Aarohi is very tense. She worriedly asks Aarohi what happened and why she is crying.

Later at Goenka house, Manish, Akshara and Swarna wish that Manjiri gets fine soon and performs Abhimanyu and Akshara’s all engagement rituals. Akshara tells Swarna and Manish that Abhimanyu is still worried thinking about who is behind Manjiri’s accident. Aarohi overhears this. Akshara says Abhimanyu is very happy about her and his engagement. Aarohi feels nervous and Akshara notices it. Akshara asks Aarohi if she is fine. Aarohi tells Akshara that she is fine. She asks Akshara to focus on her engagement. Akshara requests Aarohi to enjoy her wedding. Aarohi signs okay. Goenkas discusses calling the designer home for selecting Abhimanyu’s engagement ring.

Suhasini reveals to family that it’s a very auspicious day today. She says they will perform Abhimanyu’s pooja today as he is going to be their son-in-law. Akshara asks her family why always sons and son-in-laws pooja’s are performed, not daughters or daughter-in-laws. Kairav and Suhasini reminds Akshara that daughter and daughter-in-laws pooja is done and are loved dearly on Navratri, Raksha Bandhan, Laxmi Poojan, Teej and Gangaur festival. Akshara says that all this is done as formality but in reality sons and son-in-laws are respected more. She says daughters are not valued. Akhilesh asks Akshara why she is getting so irritated.

He also asks Akshara if she is getting insecure about Abhimanyu’s position in Goenka house. Everyone teases Akshara. Akahara feels a little irritated and insecure seeing her family’s growing love towards Abhimanyu. Akshara jumps on the sofa. She tells Goenkas that they will perform such a ritual which their adorable/dear son-in-law will never be able to forget his whole life.

Reviewed Rating for Yeh Rishta 24th March 2022 Written Update Manjiri’s revelation: 4/5 This rating is solely based on the opinion of the writer. You may post your own take on the show in the comment section below.