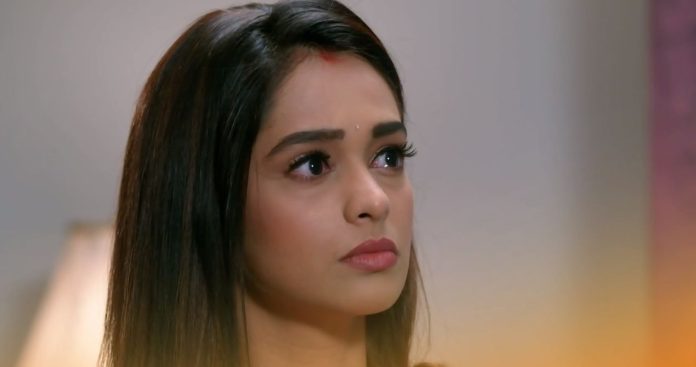 Kumkum Bhagya 25th March 2022 Written Update Ranbir innocent Prachi and Ranbir have a longing for each other, but stay away because of their egos, which doesn’t let them unite. Their scene reminds of Abhi and Pragya, who preferred to stay away because of their egos that kept them distant for years. Prachi cares for Ranbir, but doesn’t express it, with a fear that he will break her trust again. She gets worried for Ranbir, knowing he won’t be able to sleep well in the living room. Ranbir struggles to find the truth to prove himself right. He has clarified his stance to Rhea and Prachi as well. He doesn’t want to compromise in his life and ruin his own happiness.

Rhea plans to send Prachi out of Ranbir’s life, thinking only after getting rid of Prachi, she can win Ranbir. She doesn’t want Ranbir to find the truth. She is disturbed that Ranbir has no faith on their special night, even when he woke up in the bed with her. She feels hurt that Ranbir has told such harsh things. She knows the truth that he passed out before they got intimate, but she doesn’t want to her this from him. She wants him to move on.

She recalls his words that he is still standing at the same point where he started a life with Prachi. His confession that he likes Prachi shakes up Rhea. Prachi sheds tears for Ranbir when she realizes his pain. Shahana gets close to reveal about the pain which she consumed as a trial to find out Rhea’s plan. She will be revealing the truth of Ranbir’s spiked drink and innocence on that night. How will Prachi react when she learns that Ranbir is innocent and didn’t plan any intimacy with Rhea? Will the truth come out or stay hidden for long? Keep reading for a full update.

Ranbir gets mesmerized seeing Prachi. He tells Dida that he is really finding Prachi lovely. He compliments Prachi. He tells her that he feels it’s a happy day. He asks her to see the world with a new perception, they maybe she will like him too. Prachi wants to believe in his innocence. She recalls Shahana’s words about Ranbir’s spiked thandai. Ranbir asks Prachi to have good breakfast. Dida leaves them to talk. Prachi asks Dida to be with them. Ranbir asks Dida to sit with her for some time.

He tells Dida that Prachi is scared to spend time with him, because she may express her feelings and get caught. He asks them to have food. Rhea arrives to break their peace. She tells Ranbir that she will serve him the food. Shahana interrupts in between them and irks Rhea. Ranbir asks Rhea to relax and calm down, its just the food plate that Shahana took from him. Aaliya asks Shahana when is she going back home. Shahana tells that she can ask Aaliya the same. Ranbir tells that he got Shahana home and she is his responsibility. Pallavi asks him why is he taking her so much side. She questions his concern. Rhea tells the reason that Shahana is pregnant.

Ranbir tells that Shahana isn’t pregnant. He asks Rhea why is she saying so. Rhea tells that its not a lie, even he knows it. Ranbir takes Rhea aside to cover up the truth. Prachi gets worried. Rhea asks him why is he denying it. She asks the family why did they get serious, she was just giving them a good news to make them happy. Dida tells that it was not a good joke. She rebukes Rhea. Pallavi tells that Rhea didn’t do right. Rhea tells that it was a simple prank. Dida tells that someone’s respect is linked with her prank, Shahana isn’t married, her joke can insult Shahana. She tells that a baby should have his parents’ name, else it’s a problem. Ranbir asks Dida not to spoil the mood and have food. Prachi serves the food for Ranbir. They share a problem.

Rhea tells Ranbir that she lied just to keep his heart, she will keep the secret of Shahana’s pregnancy. Prachi gets angry seeing Ranbir and Rhea murmuring. She leaves. Pallavi tells that Vikram is busy in work and didn’t come. Ranbir tells that he will go and see Vikram. Even he leaves after Prachi. Shahana gets the breakfast for Prachi. Prachi apologizes to her. She tells that Shahana got insulted because of her. Shahana asks her not to worry. They hug and pacify each other. They find Ranbir at the door. Prachi worries that he might have heard about the pregnancy. She starts lying. Shahana thanks Ranbir for his unconditional support. Ranbir tells her that Prachi and he will always support her.

He is sure that Shahana isn’t taking any wrong decision for the baby. Prachi has a reason to hide the pregnancy truth from him. Shahana feels guilty and leaves from there. He asks Prachi is Shahana hiding something from him. Prachi doesn’t tell him anything. She asks him why did he let Rhea eat the food from his plate. She sounds jealous. He gets glad to see her jealousy, which shows her rights. Rhea doesn’t know why is Aaliya talking strange. Aaliya tells that Pallavi shouldn’t know the problem between Ranbir and her. Rhea pretends happy. She tells that Ranbir is really happy with her. Pallavi is happy to see Ranbir and Rhea happy. Dida tells Pallavi that everything won’t happen as she wants, Ranbir doesn’t want to stay with Rhea.

He finds her changed. She tells that she is just the same. He asks her what would he do if Rhea eats from his plate. He understands her jealousy. He tells that he wanted to thank Rhea when she hid about Shahana’s pregnancy. He asks what would have happened if Rhea exposed Shahana’s truth. She tells that Rhea had created a drama by playing a prank first. He asks her to support him and trust him. He liked it that Prachi felt bad seeing Rhea with him. He wants Prachi to trust him completely. He decides to prove that she means a world to him. He wants to get Prachi back in his life.

Reviewed Rating for Kumkum Bhagya 25th March 2022 Written Update Ranbir innocent: 4/5 This rating is solely based on the opinion of the writer. You may post your own take on the show in the comment section below.