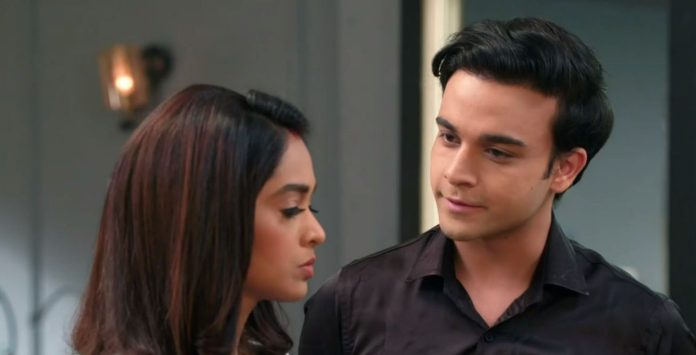 Kumkum Bhagya Pranbir double twists 25th March 2022 Written Update Double episodes aired on 25th March 2022 Aaliya tells Rhea that everything will be fine. Rhea tells that she doesn’t want her assurance. She wants things to really get fine. She is losing her patience. She tells that she is going to lose Ranbir. Aaliya asks her to present herself well and look attractive to Ranbir. Rhea asks what is she saying. Aaliya advises her to fight back. She tells that Prachi attracts Ranbir, even Rhea should do the same. She wants Rhea to feel better and then fight to get Ranbir back. Rhea thanks her for motivating her. She asks Aaliya to see what she does. Aaliya tells that Rhea needs rest now. She asks her to go and sleep. She knows that it will be a tough fight, it won’t be so easy for Rhea. Prachi gets stressed about Ranbir.

They both try to sleep. Prachi is restless and thinks Ranbir will come and trouble her a lot. She keeps his pillow and blanket ready. She cares for him. She tells that she will not let Ranbir sleep on the bed. Ranbir feels uncomfortable on the sofa. Prachi also loses her comfort. She thinks to keep the door open. She doesn’t want Ranbir to taunt her all the time. She leaves the door open for him and thinks he will come inside when he sees the door open. Ranbir doesn’t get sleep. He feels he is wasting time. Prachi tells that Ranbir can’t sleep in the study room. She waits for him. She thinks if he has gone to Rhea’s room. She goes to see Ranbir. Ranbir enters Prachi’s room and doesn’t find her. He wonders where did she go.

He looks for his clothes in her cupboard. Prachi doesn’t find Ranbir in the study. She thinks he has gone to Rhea’s room and fooling her. She gets angry on him. Shahana stops Prachi and asks her to not get much angry on Ranbir. She tells that she should vent anger on Rhea. Prachi doesn’t listen to her. Prachi tells that Ranbir lied to her and then went to sleep in Rhea’s room. She finds the door locked. She tries to look inside and find out if Ranbir is inside with Rhea. She knocks the door and disturbs Rhea.

Rhea tells that she was sleeping. She asks what does she want. Prachi and Shahana make an excuse and enter the room to check for Ranbir. Rhea wonders what is happening. Prachi tells Shahana that she is getting much anger these days. She wanted to tell Ranbir to sleep in her room, but he didn’t come. She asks Shahana what did she eat that she got intoxicated. Rhea hears their talks. She tells that she has seen Prachi’s fear of loss. She taunts Prachi. She asks Prachi not to be so insecure. She tells that Prachi will get to see Ranbir with her/Rhea every day.

Rhea tells that she has shifted to Ranbir’s room now. She asks Prachi if she is really scared of the defeat. She reminds that Ranbir and she had a night together. She angers Prachi. Prachi gets frustrated. She asks Rhea to change her perspective. She answers Rhea and accepts that she is jealous, but she has no fear of losing, it can be dangerous for Rhea. She makes Rhea know that she can do anything to get Ranbir back from Rhea, because Ranbir belongs to her. Shahana tells that Prachi will snatch Ranbir. She goes to tell Prachi about the pill which left her intoxicated. She asks Prachi what is she thinking about Rhea. She calls Prachi jealous. Ranbir comes from a bath.

He tells Prachi that he knows it well that she was waiting for him. She tells that she didn’t even remember that he would be coming. She distracts him and quickly removes the pillow and sheet from the couch. Ranbir teases Prachi that he knows her thinking well. He also calls her jealous. He tells that Prachi is just of him, she will be the same Prachi. Prachi tells that the pillow wasn’t for him, but for herself, she can sleep anywhere in the room. She lies to him. He feels love for her and pulls her cheeks. He tells that he has some work. He asks her to meet him at the breakfast table and serve him the breakfast. Rhea finds Ranbir coming from Prachi’s room. She questions Ranbir.

Ranbir tells that its his room, not of Prachi. He behaves unconcerned. Rhea asks him to stay in their room. She doesn’t want to blame him knowing he isn’t able to accept their relationship. He tells that he can’t take a shower in her room. He asks her to discuss the odd topics later. He goes away. Rhea thinks to get ready and have breakfast with him. Prachi tells Shahana that she will never do anything that Ranbir wants. Shahana tells her that Ranbir has just pulled her cheeks with love. She tells that Ranbir and Rhea didn’t get intimate. She reveals about the tablet strip she had found in Rhea’s dustbin. She tells that she had taken the same tablet to know the effects of the medicine. She adds that Ranbir would have not done anything wrong after taking that tablet. She tells her that Ranbir is innocent. Prachi thinks about him. Ranbir tells Dida that he is really happy today. Dida tells that its his right to stay happy, she knows that he loves Prachi.

Reviewed Rating for Kumkum Bhagya Pranbir double twists 25th March 2022 Written Update: 4/5 This rating is solely based on the opinion of the writer. You may post your own take on the show in the comment section below.