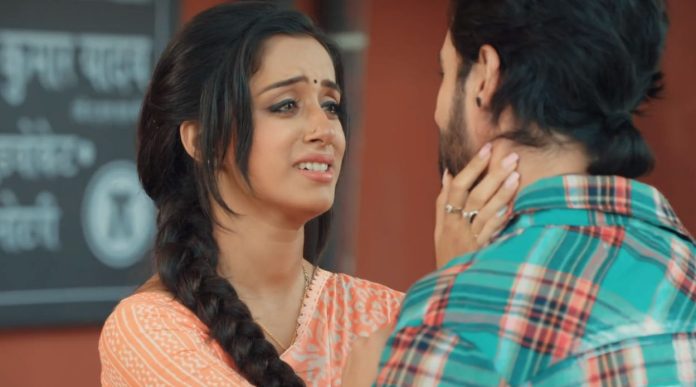 Yeh Hai Chahatein 26th March 2022 Written Update Rudra Prisha union Prisha asks a crying Vaijayanti why she killed Venky. Vaijayanti asks Prisha to believe her that she never wanted to kill Venky. She says she kept that gun for her own safety and protection. Vaijayanti also says that she saw Venky pointing a gun at Rudra. She further says that she had to save Rudra’s life anyhow. Vaijayanti tells everyone that she failed to think of anything in fear and just shot Venky. Rudra angrily asks Vaijayanti why she didn’t tell the truth to anyone, when she actually shot Venky to save him.

Vaijayanti says after this she got greedy of living a good and lavish lifestyle. She tells Rudra that being a Rockstar he has a good status and lavish lifestyle. Vaijayanti reveals that she thought of living a lavish life being Rudra’s wife. She says if she would have remained a lawyer, then she would have to work very hard. Prisha asks Vaijayanti if she ruined all relationships and plotted against her, just for money. Vasudha tells Vaijayanti that they made her a part of their family and in return she ruined their family. She asks Prisha why she suffered alone and remained away from everyone, even after knowing that she didn’t kill Venky.

Rudra asks the same question from Prisha. He says their whole life and family messed up. GPS tells Rudra that Prisha did everything to save him. He tells Rudra that Prisha didn’t wanted him to get blamed for murder. Rudra asks Prisha if she really took murder blame to save him. He asks Prisha to explain to him as he isn’t able to understand anything. Rudra says he went unconscious and didn’t know what happened after that. He asks Prisha to explain to him what exactly happened. Prisha explains to Rudra that in the storm she saw a gun in his hands and Venky getting shot. She says she thought that he killed Venky and thus took his gun in her hands to take his blame on her.

Rudra feels guilty for taunting and blaming Prisha for everything. He feels bad knowing that Prisha suffered and struggled a lot alone. Rudra feels guilty for not understanding Prisha’s sacrifice. The hearing starts again. Prisha and Rudra hold each other’s hands while sitting for the hearing. Lawyer Khatri requests the Judge to punish Vaijayanti severely for Venky’s murder as well as for deceiving the law. Judge explains a lawyer’s responsibilities to everyone present in the court. He says what Vaijayanti did was wrong and a matter of concern. Judge says Vaijayanti committed a murder as well as tried to trap her own client.

He punishes Vaijayanti with rigorous life imprisonment. This shocks Vaijayanti. Yuvraj feels irritated on knowing that Vaijayanti also failed in separating Rudra and Prisha. Vaijayanti is taken away by the police. Rudra and Prisha discuss that lies can’t live long and truth never gets defeated. Rudra says it took long but the truth triumphed at the end. Both Prisha and Rudra hug each other. Vasudha, Saaransh and GPS smiles seeing Rudra and Prisha’s reunion. At the school, evil elder boys scare the 5th standard boy once again. They ask him who was the girl who complained to the principal about him.

The scared younger boy points towards Ruhi. Elder boys get determined to teach a lesson to Ruhi, so that she will never be able to complain about them. On the other hand; Vasudha, GPS, Prisha, Saaransh and Rudra leave the court. Rudra walks hand in hand with Prisha. Prisha tells Rudra that she finally feels relaxed knowing that now nobody will run after her to arrest her. She says she will finally be able to live free and happily. Prisha tells Rudra that many times she stopped herself from telling him the truth, so that he doesn’t come to live and run with her by ruining his life for her. Rudra bends down to touch Prisha’s feet in apology.

Prisha asks Rudra what and why he is doing this. Rudra tells Prish that this is his devotion for her. He also tells Prisha that he wants to give her respect she deserves rather than apologizing. Rudra further asks Prisha to not stop him because he can’t be what she is. Prisha tells Rudra that he doesn’t know what he means to her. She asks Rudra how he can love her immensely. Rudra asks Prisha how she can call this love. He reminds Prisha that he considered her a criminal and left her. Prisha tells Rudra that he doesn’t know the truth. Rudra tells Prisha that she always remained as his shield, but he never trusted her and troubled her.

He also tells Prisha that he should have understood her. Rudra further tells Prisha that his heart always asked him to believe her but he supported his brain and accused her for everything. He asks Prisha why he didn’t understand that she keeps him and her family above everything else and herself. Rudra says he can’t be forgiven and apologizes to Prisha. Prisha tells Rudra that every human is different and their way of expressing love is also different. Prisha tells Rudra that he never left her alone as he always remained in her heart. She also tells Rudra that she felt him closer whenever she went weak.

At school, the older boys intentionally make Ruhi fall and make fun of her too. Ruhi notices the bracelet in the evil elder boy’s hand. She asks the evil boy why he made her fall. The evil boy smirks and leaves. Ruhi tells her teacher that an evil elder boy intentionally made her fall. She also tells her teacher that she saw a scorpio shaped carving on that evil boy’s bracelet. Ruhi’s teacher tells her that they will find that evil boy and punish him. The teacher takes Ruhi with her. The evil boy and his evil friends overhears everything and says Ruhi is extra-smart. The evil boy removes his bracelet. His evil friends tell him that if the teachers find him with this bracelet, he will surely get punished.

Little Ruhi screams for help in darkness. The evil boy and his friends laugh at Ruhi from outside. Ruhi keeps on tapping the washroom door for help. The evil boy with his evil friends throws a smoke bomb in the girl’s washroom, where Ruhi is alone. Ruhi gets scared of it. The evil boy and his evil friends hear Ruhi coughing inside. Evil boy thinks that now Ruhi won’t even think of messing up with him. He puts an out of order sign board outside the girl’s washroom and leaves with his evil friends. Scared, Ruhi screams for Rudra and Prisha. On the other hand, Sharda gets shocked on knowing what all evil things Vaijayanti did.

Everyone discusses that till now they never learnt Vaijayanti’s reality in years. Rudra asks everyone to forget everything and be happy as Prisha is with them now. Sharda tells that only she has always been her daughter-in-law for her. Vasudha thanks God for making everything all right. Rudra says now the only thing left is to tell Ruhi that he is her real father. Everyone wonders where Ruhi is. Sharda says that she sent the driver to pick up Ruhi from school. The driver calls Sharda and tells her that Ruhi can’t be found as she didn’t come out from school till now.

Reviewed Rating for Yeh Hai Chahatein 26th March 2022 Written Update Rudra Prisha union: 4/5 This rating is solely based on the opinion of the writer. You may post your own take on the show in the comment section below.