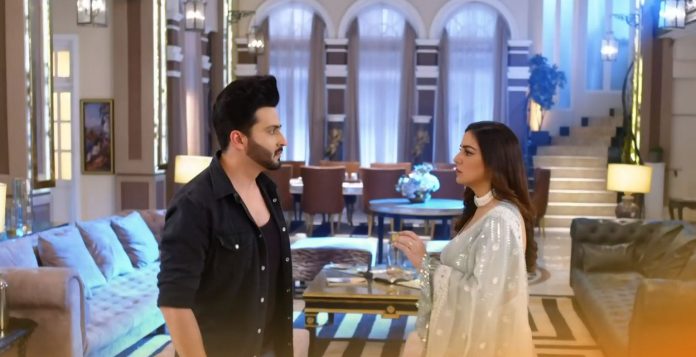 Kundali Bhagya 28th March 2022 Written Update Karan baffled Karan defends Preeta. He overhears Sherlyn and Natasha, and realizes that they are brainwashing Kritika against Preeta. He tells them that Preeta didn’t do anything wrong, she didn’t plan to get the property papers stolen. He tells that Preeta can never plan such a thing to get Preeta out of the house. He adds that it was Prithvi whose greed made him commit the crime and thus he landed in the jail. He tells that Preeta won’t steal her papers herself to frame Prithvi, Prithvi is wrong that he has stolen the papers.

Later, Preeta thanks Karan for helping her. He tells that she doesn’t need to thank him because he has helped her unknowingly. She tells that Prithvi was wrong, he is behind the bars because of his mistake. He tells her that he knows it well that Prithvi is wrong, but he also knows that it was all her planning, she had the papers and then she planned this to get Preeta arrested. Preeta realizes that Karan is aware of her plans. He tells her that he defends her in front of others, but he doesn’t want her to keep secrets from him. He urges her to share the truth with him and trust him. What will Preeta do? Keep reading.

Earlier in the show, Prithvi and Preeta get into an argument. He asks her to tell them that she planned this to get him behind the bar, nobody will listen to her, she will never gain anyone’s faith. She tells that she doesn’t care as long as she took the step for the family’s sake, she will love them even if they don’t love her. She tells that they hate her because they don’t know the truth, once Mahesh gets fine and she proves herself right, then they will love her and support her like before.

She cries that she needed her brother, but he isn’t there for her. Karan gets disturbed and recalls her words. Preeta comes across Karan and thanks him. Karan tells that she has framed Prithvi. She tells that Prithvi is wrong, that’s why he is arrested. He calls it her planning to use the papers and send Prithvi to the jail. Preeta tells that Kritika is innocent. He asks her not to tell him how to handle her family. She tells that she didn’t ask him to call the police, he had called the police his innocence and complaint of Prithvi.

He tells that his family is suffering because of Prithvi and her. She asks him to calm down. She tells that everything is going against them, they feel so, but in reality, something good is happening, it will be known when the time comes. He asks her not to lecture him. He tells that things will go against her, the ones she loves may hate her. He asks her to know that her heart can shatter, if anyone then asks her to calm down, then she should give such a lecture. She sheds tears. He tells that Kritika is suffering the most because of Preeta and Prithvi, Kritika isn’t talking to him, she is so hurt. He tells her that he loves her and came back to her, but she didn’t come for his love, she just came to fulfil her motive. He feels angered. He goes away in anger. She tells that she understands everything.

Preeta feels terrible that she can’t even express her emotions to the family. She tells that Karan is free to vent out the frustration, but she can’t tell the family that she loves him so much. Sameer stops Karan for an important talk. Karan doesn’t want to talk to him. Sameer hugs him and calls him the world’s best brother. Karan is still upset because of Preeta. Sameer doesn’t want to leave Karan alone. Karan asks him to stop irritating him. He tells that he isn’t able to control his thoughts. He asks Sameer did he hear Preeta and his conversation. He tells that Preeta is the root of all the problems, Kritika is really hurt. He tells him that Kritika isn’t understanding him and regards him an enemy.

Sameer defends Preeta. Karan asks him not to get him wrong. Sameer tells that Karan was shouting on Preeta, because of Prithvi. He calls Prithvi a disgusting person. He asks Karan to realize his mistake in blaming Preeta. He tells that Preeta is right, she isn’t wrong, she has got the family get rid of Prithvi, his intention was wrong, he has a selfish motive. He reminds that the blame was also on Karan, but Preeta saved him, she would have not saved him if she was bad. He calls Prithvi wrong, he is such a person who will always be wrong. Karan knows that Prithvi is wrong. Sameer rebukes him for hurting Preeta. He asks Karan to say sorry to Preeta. Karan refuses to say sorry.

Sameer asks him to say sorry to Preeta with love, her heart will melt, she will forget their differences. He knows that Karan has a big heart and he will not step back this time. Karan agrees to apologize. Preeta is upset. She knows that Prithvi is wrong, she loves his family, and the family will love her too, when they know the truth. She decides to tell the truth to the family that she has come home for Mahesh’s sake. She gets a chance to return the happiness to the family. She thinks once Mahesh gets stable, then the family will love her for the good efforts. She expects their good times. She wants to tell the family that she isn’t against them, she is with them and wants to help them regain their joy and confidence.

She falls weak in her emotions. She thinks to stay back in the Luthra mansion if the family accepts her, else leave from there for their betterment. She is ready to accept their decision. Prithvi gets miffed by his cell mate. He asks the man to sit quiet. The man offers him a drink. He motivates Prithvi saying that one who tries never loses. Prithvi likes his talks and accepts the drink. He tells that he doesn’t talk to anyone unless he finds someone useful to him.

Kareena, Bani and Rakhi plan a holi function. They decide to invite the guests. Bani asks about the food arrangements. Rakhi tells that she will prepare everything as Mahesh likes. She doesn’t want anything wrong to happen. She tells that negativity has gone away from the house. She wants to play holi with colours. Preeta overhears them. She thinks to tell them the truth on the holi day and fill colours of joy in their lives. She expects a happy union with the Luthras. She wishes that she could have told the truth to Karan first. She feels hurt recalling Karan’s rude behavior.

Reviewed Rating for Kundali Bhagya 28th March 2022 Written Update Karan baffled: 5/5 This rating is solely based on the opinion of the writer. You may post your own take on the show in the comment section below.