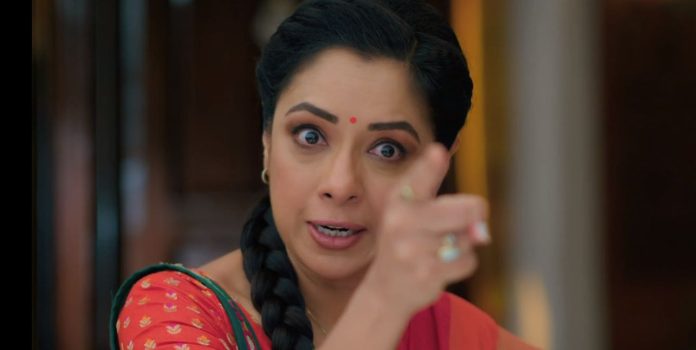 Anupama 29th March 2022 Written Update Anupama’s challenge Anupama enters the Shah house. In the dark, Vanraj is seen standing in her way inside. He tells Anupama that electricity went off with her auspicious steps. Anupama tells Vanraj why it seems like electricity fell on him. She asks Vanraj if electricity really fell on him yesterday. Suddenly, the electricity returns. Whole, family can be seen sitting in the living room. Anupama walks to everyone. She sees Baa’s angry expressions and recalls her words against her marriage decision. Anupama greets everyone by folding hands and says, “Jai Shri Krishna”. Mamaji feels happy and excited with Anupama’s return.

An angry Baa and other Shah family members walk towards Anupama. Bapuji stops Vanraj from even uttering a word to Anupama. This shocks Baa and Vanraj both. Anupama smiles and touches Bapuji’s feet. Bapuji blesses Anupama to always be happy. Kinjal and Samar hug Anupama happily. Bapuji asks Anupama if she and everything is fine. Anupama says yes. She asks Kinjal if she is well. Kinjal says yes. Rakhi asks Anupama why she is showing fake care now. She reminds Anupama that left for Udaipur leaving Kinjal behind.

Anupama asks Rakhi if she stayed at Shah house with her box of clarified butter to rekindle the fire. Rakhi replies that she stayed at Shah house only. Anupama asks Rakhi how Kinjal was alone when she was staying in Shah house. Anupama’s tone and confidence shocks as well as angers Baa, Vanraj and Rakhi. Anupama reminds Rakhi that she is going to be a maternal grandmother. She asks Rakhi to stop her idiotic evil tricks. Kinjal asks Rakhi if she is finished as she also wants to talk to Anupama. She asks Anupama how everything was in Udaipur. Anupama tells Kinjal that everything went well even when Anuj remained busy in a lot of meetings.

Baa, Pakhi, Paritosh and Vanraj still seem angry. Bapuji and Samar show Anupama, her winning trophy. Anupama gets surprised seeing the trophy she won for her dance competition. Samar tells Anupama that Bapuji has clicked more than 100 selfies with her trophy, since it arrived. Bapuji says he can take as many selfies as he wishes with his daughter’s winning trophy. Shocked and Surprised Anupama asks Bapuji if she really won. Bapuji replies yes. Anupama grows emotional on knowing about her win. Baa, Rakhi, Pakhi, Paritosh, Kavya and Vanraj feel irritated with Anupama’s happiness and win.

Samar tells Anupama it’s her second trophy. He reminds Anupama that she won her first trophy in Pakhi’s school. Bapuji says, no one respected Anupama’s first trophy but will have to respect her second trophy for sure. Flashback shows Vanraj telling Anupama that such trophies are sold for 100 rs in the market. Bapuji hands over Anupama’s trophy to her. Anupama takes it and grows emotional. She gets teary eyed and hugs her trophy. Except Kinjal, Samar and Bapuji, everyone else feels jealous of Anupama’s happiness. Samar asks Anupama about her feelings on winning the inter state dance competition 2022 trophy.

Vanraj asks Samar if he won’t ask about his father’s feelings. Bapuji asks Vanraj to be careful. Vanraj tells Bapuji that he will not pour out his heart. He says he will only say what the world is saying. Vanraj tells everyone that Anupama’s marriage proposal to Anuj got viral on social media through a video. He calls it Anupama’s raasleela and immodesty. Vanraj says the whole world is commenting on Anupama’s marriage proposal to Anuj. He reads all the ill and negative comments. Rakhi and Kavya laugh hearing all this. Baa, Paritosh and Pakhi feel embarrassed.

Samar asks Vanraj to stop his nonsense. Vanraj tells Samar that he isn’t saying all this. He says that comments are continuously coming. Rakhi tells Vanraj that it’s damn funny. She tells Anupama that he days of becoming a bride went and asks her to become a grandmother. Rakhi asks Vanraj to continue reading people’s comments. Kinjal asks Rakhi to stop as it isn’t funny. Vanraj tells Kinjal that it’s really funny and continues reading the ill comments. Anupama asks Vanraj to continue reading all the comments. Her tone and confidence shocks everyone.

Anupama tells everyone that she read all the comments in the car, while returning. Vanraj asks Anupama if she didn’t get affected by reading ill comments about her. Anupama tells Vanraj that she didn’t get affected at all by these nonsense comments. She says all these poor commenters didn’t taunt her much, as she heard much worse taunts than this in the last 26 years living at Shah house. Anupama says that she doesn’t fear anyone’s taunts as she lives with two taunt specialists. This confident attitude of Anupama shocks everyone.

Anupama tells Baa and Vanraj that these commenters can’t ever match their level even if they take tutions from them. Baa asks Anupama if love made her so mad that she became immodest and insolent too. Anupama confidently says that she has really become mad at Anuj’s love. Except Bapuji, Samar and Kinjal, everyone feels shocked and disgusted with Anupama’s words. Baa asks Anupama to fear people of the world. She asks Anupama if she doesn’t get affected even a bit by people’s ill comments. Anupama says that she doesn’t get affected now as she has suffered a lot already.

Baa asks Anupama if she doesn’t get affected by her family member’s comments too. Anupama says yes she gets affected by her family’s opinion and comments as she loves her family a lot. She stops Vanraj and tells him that she doesn’t want to argue or fight now. Anupama reminds everyone that she remained silent and heard everyone on holi. She says now everyone will have to listen to her by keeping quiet. Flashbacks of Holi arguments between Shahs are shown. Samar, Bapuji and Kinjal feel proud of Anupama’s confidence and stand for herself. While others feel shocked. Kavya and Rakhi tauntingly ask each other why they aren’t saying anything.

Baa asks Anupama why she and Vanraj will hear her nonsense and see her shamelessness. She asks Anupama if she doesn’t feel ashamed taking out the word love from her mouth. Baa tells Anupama that her head should be bowed down hearing all the taunts and ill words against her. Anupama asks Baa if her head should be bowed down just because she is a woman. Baa says yes. She says a woman’s head should always be bowed down because they have to carry on their life with modesty and dignity. Anupama tells Baa that nothing is bigger than love. She says love is Lord Krishna’s worship and Goddesses Radha Ji’s heartbeat.

Anupama asks why she should be ashamed if love is Radha and Krishna. She says life’s journey is long and everyone puts the whole burden of sacrifices, taunts and responsibilities on a woman. Anupama says like every woman, she has got very tired of the burden of sacrifices, taunts and responsibilities. She also says that she won’t care or think about society’s thinking or opinion now. Anupama further says fighting with society would be easy but fighting with her family will be very difficult. Baa tells Anupama that she never considered Shahs as her family.

Anupama tells Baa that even though she is not her daughter-in-law, she does more for her than her real daughter-in-law, because she loves her. Vanraj asks Anupama if she is making them count her favors. Anupama asks Vanraj what she should do if he keeps putting allegations on her. She says she just proved her love to Baa as she asked for it. Anupama tells Vanraj that according to their relationship they should move on in their life and live it according to their own wishes. She also tells Vanraj that he keeps on bringing her back to their arguments. Anupama further tells Vanraj that he didn’t show a bit of interest in her life when she was his wife as much as he is interfering in her life at present.

Vanraj and Anupama keep arguing. Anupama challenges Vanraj to try ruining her academy and her Anuj’s business if he has the real potential. She asks Vanraj to attack her from front instead of manipulating and instigating her children against her in her absence. Anupama asks Vanraj to stop using her family and children against her. She says she sacrificed her whole life for her children, Paritosh and Pakhi. Anupama says she even heard Pakhi and Paritosh’s ill words and forgave them. Paritosh tells Anupama that whatever she did was her duty. Anupama asks Paritosh if all the duties have to be fulfilled by a mother, not a child.

Pakhi tells Anupama that they are getting embarrassed because of her. Anupama reminds Pakhi that since beginning she used to feel embarrassed of her mother. She also reminds Pakhi that she took Kavya to her School as her mother. Flashback of this thing is shown. Anupama reminds Paritosh that he feels so embarrassed of even his house that he took the first chance given by his mother-in-law and left the house. Paritosh tells Anupama that by making them count their mistakes won’t change the fact that she is an embarrassment for them.