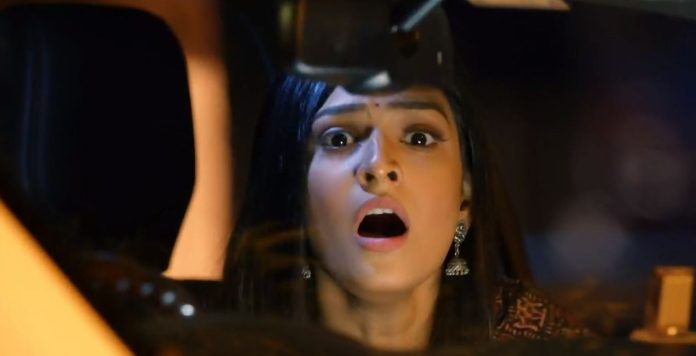 Bhagya Lakshmi 29th March 2022 Written Update News for Lakshmi Rishi asks Balwinder to spare Shalu. Balwinder tells that he won’t leave Shalu free until he gets Lakshmi and the money. He tells Shalu that the plan didn’t change, the plan is still the same, he will kidnap Lakshmi and take her away. He ties a tape on Shalu’s mouth so that she doesn’t shout to Rishi about his plan. Shalu struggles, while Ayush is also kidnapped. Lakshmi reaches there and gets to see Rishi, who takes her in the car. He asks Lakshmi why did she not call him. He tells that if she needed money, then she could have called him, he has come to save Shalu, if Shalu is her sister, then Shalu is like his sister as well.

He tells her that he cares for her and also her family. He takes her to a safe place, and assures that they will rescue Shalu. He tells her that she may not be knowing about the kidnapper. She asks him if he knows the kidnapper. He answers that Balwinder is the kidnapper. Lakshmi finds it expected, since Balwinder tried to kidnap her as well at the Kohli holi party. Inspector Rakesh and Virender are also on the way. Balwinder tells that he will not free Shalu and Ayush until Lakshmi comes to beg him. Balwinder wants his revenge and also plans to marry Lakshmi. Lakshmi gets to see Balwinder taking Shalu in the van, and is left shocked.

Earlier in the show, Balwinder tells that he is a hero for Lakshmi, he will get his heroine today. He wants Lakshmi. He asks Rishi to call her. Lakshmi tells the auto driver that she will drive the auto. He asks her who had taught her to drive an auto. She tells that she learnt it on her own because of a goon. Rishi tells that Lakshmi didn’t come with him, he has come to find her. Balwinder doesn’t believe him. Rishi asks him to believe him. He tells that he has come to save Shalu. Ayush wants to tell that he is also stuck. Balwinder asks Rishi did he get the money. Rishi shows the money bag. Rakesh tracks Balwinder’s location. He leaves with his team. Virender accompanies Rakesh. Will Oberois save Lakshmi and Shalu from Balwinder? Keep reading.

Rishi shows the 50 lakhs cash to Balwinder. He asks Balwinder to free Shalu. Balwinder asks him to give the money bag. Rishi calls him an idiot. He asks him to first free Shalu and then get the money. Ayush wants to tell Rishi that even he is there. Ayush and Shalu get into a funny argument. He tells her that he has come all the way to save her, he is like a hero for her. She tells that he got stuck, so he isn’t a hero, Rishi is the real hero, who will save them now. Ayush calls her mad. She calls him mad. The kidnapper ties the tape to their mouths to stop their nonsense. Balwinder tells Rishi that Shalu is creating ruckus since he kidnapped her. Balwinder asks the goons to get Shalu in front.

Rishi gets to see Shalu and asks her if she okay. He asks her to walk towards him. Balwinder asks him to give the money bag. Rishi asks Shalu not to worry, because Balwinder didn’t kidnap anyone else. Shalu tries to tell about Ayush. Balwinder sees Rishi coming with the bag. He tells Shalu that he will leave her and kidnap Rishi, he will take Rishi and Ayush with them and then kill them. Rishi stops midway and waits for Lakshmi. Balwinder calls him a miser. He tells Shalu that Lakshmi didn’t come till now. He gets Rano’s message. He learns about the police. He has to rush and leave.

Balwinder takes the money bag from Rishi and pushes him. He doesn’t leave Shalu. Rishi falls down. Balwinder and his goons leave from there when the police comes. Rishi stands helpless. He gets to hear the police siren but sees an auto rickshaw coming. He thinks what’s happening. Lakshmi stops the auto rickshaw and sees Rishi there. He asks her is she driving the auto rickshaw to earn money. She tells that she came driving the auto rickshaw to reach there. The driver asks for the fare. Lakshmi looks for the car keys. She tells Rishi that the kidnappers have taken Shalu. Rishi tells her that he met them and the goons fled when she came there. The driver asks for the auto damage compensation.

He tells that Shalu means something to him as well. She asks him if Neelam didn’t stop her. He tells that he had a reason to come, that’s her. She doesn’t know why the goons kidnapped Shalu. He asks doesn’t she know the kidnapper, Balwinder. She can’t believe it. Balwinder doesn’t want to get caught, and lose the money. The goons hide Shalu and Ayush and keep them at gunpoint. Balwinder is angry that Lakshmi didn’t come to save Shalu. Lakshmi tells that Balwinder is really mad to demand 50 lakhs, because she doesn’t have money. Rishi tells that he has enough money. She tells that Pritam and she didn’t have money.

He tells that they are separated now, their families are also different. He tells her that she could have unblocked his number and called him. She asks him why is he talking like she blocked his number. He tells that she blocked him. They see Balwinder’s car and get distracted. Balwinder sees the police following. Rishi follows the car and gets to see Ayush with Shalu. Lakshmi and Rishi get worried. Ayush wants Rishi to save them somehow. Lakshmi asks Rishi to drive faster. Rishi asks him to sit quiet and not behave strange. She apologizes to him. She tells that she got angry. He tells that she always blocks people in anger. She taunts that even she knows some people like that.

Rakesh and Virender don’t find anyone at the cliff side. Rakesh tells that the kidnappers have left. Virender tells that Rishi and Lakshmi would be together. Balwinder tells the goons that Lakshmi isn’t coming after him, the world got after him for no use. He sees Rishi’s car following. Rishi tells Lakshmi that he will not miss the goons’ car. Rishi is upset that Lakshmi blocked his number. Lakshmi and Rishi have a cute banter. She tells that she has stress about Ayush and Shalu. She explains that friends are such. Rishi tells that friends are close to heart.

Reviewed Rating for Bhagya Lakshmi 29th March 2022 Written Update News for Lakshmi: 5/5 This rating is solely based on the opinion of the writer. You may post your own take on the show in the comment section below.