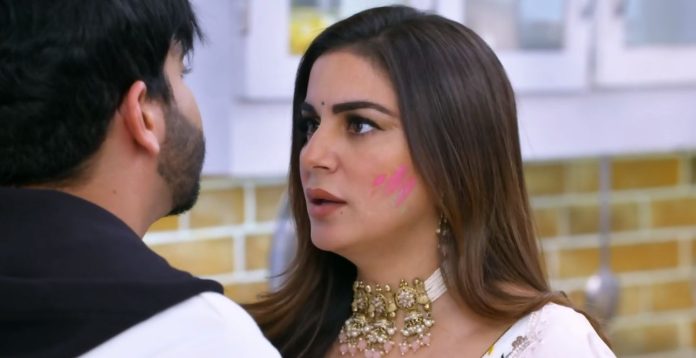 Kundali Bhagya 31st March 2022 Written Update Guest for Preeran Prithvi makes a plan with Naagre. He tells that if he can’t get the bail, then he can send someone else to get his papers from the Luthra house. He tells that Luthras would be celebrating in the holi party, if any person goes in the party in disguise and get the papers then it will be good. Naagre tells him that if their aide goes there and fails to opens the basement lock then what will they do. Prithvi’s cell mate offers help, after hearing their conversation. He tells that he can help them in stealing the papers. He is ready to help Prithvi after befriending him. Prithvi decides to give that man a chance.

On the other hand, Karan and Preeta have a romantic moment in the kitchen. He tells her that she is getting nervous, so she is avoiding her, she shouldn’t go so soon. She tells that she isn’t nervous, she has to go out and attend the guests. He teases her with love. Later, Karan finds Kritika upset. He tells her that the entire family is happy, she should also play holi with them. He adds that the family is happy that Prithvi has left the house. Kritika gets more upset hearing Karan’s words while Natasha stands smiling and admiring Karan. Who is the guest that’s going to ruin Preeta and Karan’s happy Holi? What twists will come with the robber’s entry in the party? Keep reading.

Earlier in the show, Naagre meets Prithvi. He tells that Prithvi first fired him and then hired him, knowing he won’t get anyone like him. Prithvi tells that he has realized it, he is really sorry. He apologizes to Naagre. He tells that he was drunk. Naagre forgives him. He understands Prithvi’s suffering. He tells that he will free Prithvi soon, because he is his friend. Prithvi thanks Naagre for getting convinced. He knows that Naagre will get him out soon, but he doesn’t have much time, Preeta can snatch everything from him. Naagre tells that she is money-minded, she will not leave anything with Prithvi now.

Prithvi asks Naagre to get the papers from the Luthra house. Naagre tells that its impossible for him to go there and get the papers, maybe Preeta didn’t think of stealing the papers and get this idea on seeing him. Prithvi asks what does he mean. Naagre asks Prithvi who has the locker keys. Prithvi tells that nobody can know about the keys location, its in Mahesh’s basement room, nobody from Luthra family can know that the keys are inside an ordinary vase. Naagre tells that if any outsider goes there, then the family will doubt him. Prithvi tells that they won’t doubt if the person goes in disguise.

Naagre asks him if the person doesn’t open the basement lock then their plan will fail. The cell mate offers them help by hearing their conversation. Prithvi tells that his cell mate can do the work. He wants to win the game somehow. Naagre agrees to help Prithvi by freeing the cell mate from the jail. The man demands money. Prithvi offers him 5 lakhs. The man tells that just 500rs is enough for him, he doesn’t want a heart attack by demanding much money.

Naagre gets the man bailed out for the purpose. Prithvi hopes that his work is done at any cost. Preeta makes a banana energy drink for Karan. She tells that his energy will drain out after the practice, he should drink liquids. She expresses her happiness that he has got serious about his career. He stops her and makes her nervous. They have a moment. Karan asks her if she believes in theories, he has spotted two sparrows on the way. She tells that she knows it. He tells that Rakhi calls it a good omen. Preeta tells him that she won’t play with him by listening to his sweet talks.

He answers her that he didn’t mean that. She asks him to change his clothes and come for practice. He tells that he will go any way. Preeta thinks to tell the truth to Rakhi and Karan. She wants to see Karan’s reaction when she tells him the truth. Later, Sherlyn sheds tears seeing Karan and Preeta’s lovey dovey moments. She misses Prithvi. She tells that she isn’t with Prithvi because of Preeta, who filled bitterness in their relation. She doesn’t want Preeta to have fun with Karan, when Prithvi isn’t with her. Sameer and Shrishti wish each other. She thinks to not talk to him.

He wants her to break the silence and talk to him once. Sameer and Shrishti start talking and wish each other. He seeks her permission and asks if he can apply her the colours. Shrishti permits him and asks for the purple and pink colours. They have a moment. They apply the colours with much love and emotions. She shies away. Sameer gets glad seeing her shyness and smile. Shrishti imagines their romantic moment. She gets upset when he asks her permission for applying colours. She wanted him to take an initiative himself. Preeta tells Biji that she didn’t tell the truth to the family yesterday, because she chose the holi day to tell them the truth. Biji tells that her decision is right.

Rakhi tells her about the big problem, the sweets have got finished. She asks Preeta to order the sweets. Preeta tells that the sweets will be delivered any moment. Preeta looks for Karan. Sherlyn asks Preeta to get as much as she wants, because the time is going to change. She calls someone home. Kritika weeps in her room. Natasha asks her why is she crying when everyone is waiting for her. Kritika tells that it doesn’t matter, the family is happy and holi brought happiness for them, but not for her, she is sorrowful and alone that her husband is in jail. Karan overhears them. Kritika misses Prithvi. Karan tells Kritika that she should come along. Kritika asks Karan not to convince her to play holi. He tells that he will play holi with everyone, the family is happy that Prithvi left from the house.

Reviewed Rating for Kundali Bhagya 31st March 2022 Written Update Guest for Preeran: 5/5 This rating is solely based on the opinion of the writer. You may post your own take on the show in the comment section below.