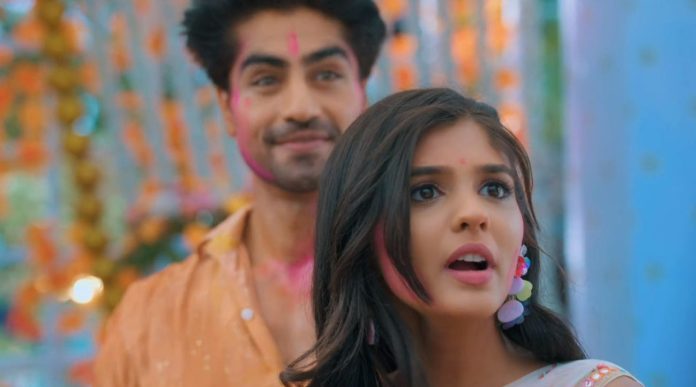 Yeh Rishta 30th March 2022 Written Update Truth revealed Akshara gets disturbed from making her video as the doorbell rings suddenly. She asks who it is. Some male voice asks Akshara to open the door once. Akshara opens the door and asks the house staff what happened. The staff tells Akshara that the thali in which Suhasini sent the food fell down. Akshara steps back to bring another thali and asks the staff to wait. Suddenly, “bole chudiyan” starts playing. Akshara turns and sees that a bluetooth device is rolling towards her. She recalls a similar moment with Abhimanyu from the past.

Abhimanyu enters Goenka Mansion with his bike. Botb Akshara and Abhimanyu get shocked seeing each other. Akshara and Abhimanyu get shocked knowing that they are exactly opposite in the matter of playing Holi. Abhimanyu recalls Neil giving him the idea to visit Akshara at Goenka Mansion as she is alone at home today. Aarohi is seen secretly watching Abhimanyu and Akshara. She recalls overhearing Abhimanyu talking to the police inspector about Manjiri’s accident on call. At the same, Aarohi decided to follow Abhimanyu to get to know what proof the inspector got regarding Manjiri’s accident.

Akshara tells Abhimanyu that she thought that he will get happy knowing that she doesn’t play holi because she misinterpreted that he and his family doesn’t play holi . Abhimanyu tells Akshara that he thought that she would be happy seeing that he is the only one in the Birla family who plays holi. He also tells Akshara that he was scared thinking that she will get scared as he plays Holi a lot (in mud and dirt). A courier boy comes and Aarohi receives a thandai bottle from him. Abhimanyu closes the Goenka Mansion door using his feet. He rides his bike in circles around Akshara. Akshara asks Abhimanyu what he is doing and asks him to play holi by returning to his house.

Abhimanyu tells Akshara that he suspects that Aarohi was keeping an eye on them through a window. Akshara requests Abhimanyu to stop suspecting Aarohi. She asks Abhimanyu to concentrate and focus on her, leaving Aarohi behind as It’s their first holi. Unaware that Akshara is drunk, Abhimanyu feels happy seeing Akshara’s cute behavior. Aarohi thinks to be careful of Abhimanyu. She also thinks that it will become next to impossible to make Abhimanyu understand, if he will get suspicious of her even a little. Akshara tells Abhimanyu that she is feeling very different today.

Akshara also gets surprised and shocked seeing that Harshvardhan also plays holi and that too in mud. Gonekas asks Akshara how she came when she wasn’t coming earlier. Abhimanyu comes and tells everyone that he brought Akshara as Manjiri is also returning. Akshara asks about Aarohi’s whereabouts, which disappoints Abhimanyu. Aarohi returns and lies to Akshara. She asks Akshara to not talk much and especially don’t reveal anything. In a low voice, a drunk Akshara tells Aarohi to not take tension as she won’t reveal anything about their accident to anyone. Aarohi gets scared and Abhimanyu notices the fear on Aarohi’s face and in her eyes.

He asks Aarohi if she was following him and Akshara. Aarohi pretends innocence and lies to Abhimanyu that she was talking to Mrs. Batra about an important medicine. Seeing Abhimanyu making a call, Aarohi feels angry realizing that Abhimanyu doesn’t trust her a bit. In the next episode, Abhimanyu and Akshara will be seen enjoying Holi a lot with their families. Akahara will also be seen drinking a lot of thandai, while Abhimanyu will be trying to stop her. Next morning, Akshara will wake up with a headache. She will recall telling Abhimanyu that she knows something about Manjiri’s accident. Abhimanyu will also ask Akshara what she was going to tell him about Manjiri’s accident yesterday. Akshara will stand stunned.

Reviewed Rating for Yeh Rishta 30th March 2022 Written Update Truth revealed: 5/5 This rating is solely based on the opinion of the writer. You may post your own take on the show in the comment section below.