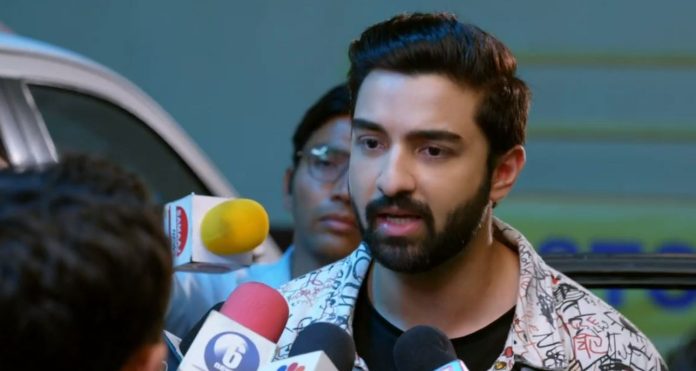 Bhagya Lakshmi 31st March 2022 Written Update Savior Rishi Rishi and Lakshmi apologize to each other, and wonder who has blocked their numbers in their phones. They unblock their numbers. Balwinder asks them to stop it and get away. Rano reaches there. Rishi tells Balwinder that he has come just for Lakshmi’s sake, he has come by going against Neelam. Ayush smiles hearing Rishi. Rishi tells that he went against his mom just for Lakshmi, who means everything to him. Rano steals the money bag. Rishi tells that he gets hurt when someone hurts Lakshmi, so he won’t let anything happen to her, he will stand by her.

Lakshmi tells Balwinder that she would have never married a disgusting man like him. She tells that Rishi is her husband, no third person can talk between them, just they know the truth of their marriage. Balwinder shouts on her. Rano tries to leave with the money. She doesn’t care if Balwinder gets caught. Balwinder asks Lakshmi not to joke, Rishi had an affair, is he her husband, he married her just to clear the Kundali dosh. He asks if he has told any lie. He asks Lakshmi to open her eyes and leave the unworthy Rishi. He tells that he will keep her happy if she comes with him. Lakshmi asks him to shut up, she hates him.

He tells that he loves her, she is just of him, else he will kill her and not let her become of anyone else. Rishi asks him to shoot. He tells that Balwinder can never understand the meaning of their marriage, he was in another relation, but when he married Lakshmi, he was just of Lakshmi. He calls Balwinder a liar. He tells that he is Lakshmi’s husband and will protect him. He asks Balwinder on his chest. Ayush finds a new Rishi. He asks Shalu to just love him, not Rishi. Shalu stops his nonsense. Rishi asks Balwinder to shoot him if he can dare. Lakshmi stops him.

He asks Shalu to never feel she is alone, she has a family. He hugs Lakshmi and Shalu. They stop Rano there. Rano tells that she had come to help. Lakshmi takes the money bag and returns it to Rishi. Rano thinks she is so foolish that she didn’t take some money out of the bag. Ayush tells that they have to go to the police station. Lakshmi asks Rano to accompany her. The media finds Oberois at the police station and question about Shalu’s kidnapping. Rishi goes for the formalities.

Rano pretends good and caring. Rano goes away with Shalu. Dadi and Ahana get the news of Shalu’s rescue. They get glad. The media asks Rano about the kidnapping. Rano tells that Balwinder. Neelam, Malishka and Karishma see Rishi and Lakshmi on the news channel. Rishi protects Lakshmi and asks the reporters to step back. Malishka fumes. Rishi answers the reporters who ask about their separation. Rishi tells that every relation has problems and issues, Lakshmi and he are connected by heart, they are together by heart, it doesn’t matter if they stay together at home or not. Lakshmi feels happy.

Reviewed Rating for Bhagya Lakshmi 31st March 2022 Written Update Savior Rishi: 3/5 This rating is solely based on the opinion of the writer. You may post your own take on the show in the comment section below.