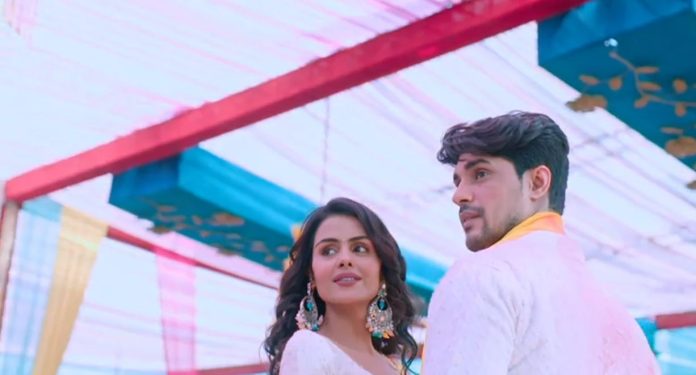 Udaariyaan 1st April 2022 Jasmin traps Tejo Spoilers Udaariyaan episode spoiler – Jasmine’s cry for help Jasmine calls Tejo and tells her that she is in a very big problem. She tells her to come fast to the farmhouse backroad. Jasmine acts that she really is in a crisis and tells Tejo to hurry up. Mahi asks the family members if they have seen Tejo and Fateh. Angad tells her that they must be somewhere here only and asks her what is the matter. Mahi warns everybody that Jasmine is up to something as she saw her with an unknown man carrying a huge sack. Rupy, Angad, and Amrik are shocked. Tejo goes to save Jasmine in the darkness. What is Jasmine’s plan? Will Mahi’s observation help Fateh to save Tejo?

Rajeev informs Parineet that he has the habit of sleeping alone on a sofa and if she will sleep with him then he will not get sleep thinking a new person is sleeping beside him. Rajeev says that he is not that guy who gets comfortable on the day of their first night. Rajeev tells Parineet if she can understand and she smiles. Rajeev makes Parineet sleep on the bed and he sleeps on the sofa. Parineet feels that Rajeev is very caring. Rajeev waits for the morning so that he can be free from Parineet. Gurinder and Rajeev talk about a land that will earn a lot of money. Parineet reaches there. Rajeev is shocked. Has Parineet heard everything? How will Rajeev handle the situation?

Imlie is devastated as she is torn between Aditya and aunty Blue. She doesn’t want Aditya to go to jail for a fake crime and she also doesn’t want aunty Blue to destroy the Rathore family. Imlie silently agrees to marry Aryan. Aryan picks up Imlie and takes 6 pheras. He tells her to take the last phera and the marriage will only happen when she too wants it. Aryan explains Imlie that her loss is not his win and she may go if she desires. He assures her that nobody will question her. Imlie unties the knot and goes away. Will Aryan’s truth convince Imlie to consider her decision once again?

Priya asks Ram to answer her question with honesty. Ram agrees. Priya tells Ram if he would have been ok if she had introduced Neeraj to him as just her friend and he would have got to know the truth from somewhere else. Priya says that she had to know that Vedika is his love. Ram says that Vedika is her past. Priya doesn’t believe him but Ram asks her to trust him. At the office Vedika asks Ram if he is still supporting Akshay after seeing the video. Ram answers yes as he knows that she has stolen the bangles. Vedika cries and apologizes to Ram. She hugs him. Priya sees them hugging. How will Ram convince Priya who is already heartbroken?