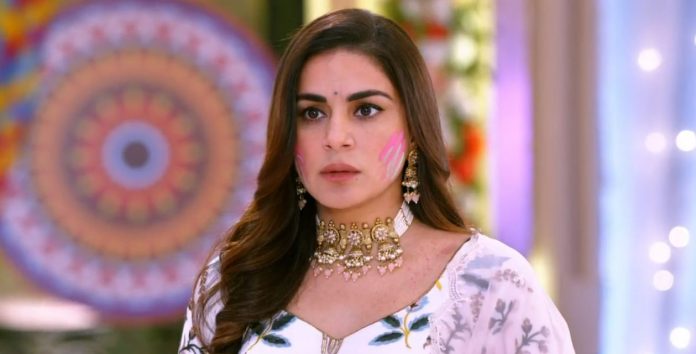 Kundali Bhagya 1st April 2022 Written Update New Plan Karan tells Kritika that he will play holi happily when Prithvi has left the house. He asks Kritika to be happy for the sake of the family. Preeta reaches them and hears Karan’s words. Karan tells Kritika that Prithvi isn’t a right man. Kritika asks him did he say what Preeta told him. He tells that he is saying so according to his senses, he also owns a mind. Kritika asks him why can’t he listen to her when she tells a word against his wife, why does he react instantly, if Prithvi was here for money then even Preeta is doing the same. He asks her not to talk of Prithvi and Preeta, and just talk of the family. He requests her to play holi with them. Preeta thinks Prithvi is in the jail because of his own bad deeds.

She gets an idea to involve Kritika in the holi celebrations. She shouts to Shrishti and shares her happiness that Prithvi is in the jail. Kritika hears them laughing. She asks Karan to see his Preeta’s truth. Karan appears upset. Janki asks Biji not to drink the thandai, else she will complain to Preeta. Biji feeds it to Janki as well. Janki applies colours to Kareena and angers her. Kareena calls her illiterate. Biji gets angry, but doesn’t care. Preeta tells Kritika that she doesn’t care for her judgement, she isn’t scared of her. She admits that she is really happy that Prithvi is in the jail, holi is celebrated for the truth winning over the evil. She wishes that Prithvi stays in the jail until the next holi.

She tells that she is busy today but she wanted to meet him and tell him that he is in the jail and his wife is jailed in the house itself. She asks Kritika to think how hurt Prithvi would feel. She tells that she is happy, but she isn’t liking that everyone else is also happy. She asks her to think the family will get upset seeing her upset face, their holi will get ruined, her plan will get successful through Kritika, their happiness is short-lived.

Kritika tells that her happiness isn’t short-lived, she will celebrate holi and make Preeta jealous. She promises Preeta and goes to celebrate holi. Kritika and Natasha leave. Karan hears Preeta’s planning to convince Kritika. Shrishti asks Preeta why didn’t she involve her in the plan. Preeta asks for Rakhi, and makes a leave. Karan asks Shrishti what’s happening. She tells that she wants to tell him, but she doesn’t know it, Preeta is really smart and crazy too. He tells that she isn’t crazy.

She asks Pradeep who is he. Pradeep tells that he has lost his way. She shows him the entry. He enters the holi party, while Naagre gets stuck. She tells Naagre that Prithvi is jailed, he isn’t at home. Naagre tells that he knows why she is such rude, maybe bad happened in her past. She asks him if he has a problem with her behavior, she is bad with the bad and good with the good, he is worse than bad, so she is behaving likely better. He tells that he will leave, but he will also lecture her before going. He wants to give her stress.

He tells that Prithvi is arrested, she may start dreaming big, it hurts when dreams break, she has kept the papers at home and laid the trap for Prithvi, but he isn’t alone, he will get bailed in a day and return home, he will lay a trap against her and this time even Karan will get trapped. He promises to fulfil his word. He tells that Prithvi is the mastermind, he is coming back to ruin her planning. She gets stressed. Naagre makes a leave. Preeta wanted to tell the truth to Rakhi that she is her old Preeta. She doesn’t want to say it so soon. She is sure that Prithvi will plan something big. She decides to not tell the truth. Rakhi asks her if she wants to say something. Preeta denies with a heavy heart.

She is busy thinking what would Prithvi plan. She wants to do something to snatch Prithvi’s powers and make him totally weak. Prithvi recalls her words and rages that she defeated him, she is his biggest enemy. He feels she has always become an obstacle in his success. He promises to ruin her happiness and hurt her ten times the pain she has given him by getting him arrested. He wants to get bailed out and return home, just to trouble her. He tells that he will get Preeta jailed, he will cast a evil sight on her happiness. Constable calls Prithvi mad because of his self-talks. Prithvi tells that it’s a silence spreading, that’s the silence that occurs before the storm, Karan and Preeta can’t tolerate the storm, their destruction has begun.

Reviewed Rating for Kundali Bhagya 1st April 2022 Written Update New Plan: 4/5 This rating is solely based on the opinion of the writer. You may post your own take on the show in the comment section below.