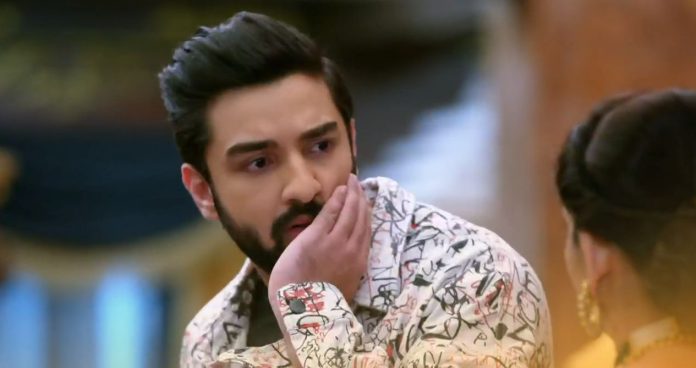 Bhagya Lakshmi 1st April 2022 Written Update Shock for Rishi Malishka calls it enough when she finds Rishi defending Lakshmi. She tells that she will not tolerate it anymore and put an end to Rishi and Lakshmi’s relation. She adds that she will plan Rishi and her marriage before Lakshmi comes back in his life. She goes mad in insecurity. She gets into an argument with Rishi when she finds him hurt. She does the aid to his hand and tells that he shouldn’t expect her to show sympathy for him. He tells that he didn’t ask her for any sympathy. Ayush calls Lakshmi and thanks her. He asks Rishi to talk to Lakshmi, she is genuinely a good person. He goes to pass the phone to Rishi and trips.

Neelam stops Rishi from talking to Lakshmi. She angrily slaps him. Virender is shocked to see Neelam’s rage at her son. Neelam can’t stand Lakshmi since the day the latter insulted her, and wants Rishi to not have any terms with Lakshmi. Lakshmi is still connected on the call, and gets to hear Neelam’s raging argument with Rishi because of her. She feels guilty.

Earlier in the show, Rano pretends good and caring. Rano goes away with Shalu. Dadi and Ahana get the news of Shalu’s rescue. They get glad. The media asks Rano about the kidnapping. Rano tells that Balwinder. Neelam, Malishka and Karishma see Rishi and Lakshmi on the news channel. Rishi protects Lakshmi and asks the reporters to step back. Malishka fumes. Rishi answers the reporters who ask about their separation. Rishi tells that every relation has problems and issues, Lakshmi and he are connected by heart, they are together by heart, it doesn’t matter if they stay together at home or not. Lakshmi feels happy.

Lakshmi and Shalu come home and meet Bani and Pritam. Pritam is really proud of Lakshmi, who bravely saved Shalu. Rano tells that she will meet Binni and inform about Guddu’s evil deeds. She goes to Neha and tells that she lost the money because of Lakshmi. Virender, Rishi and Ayush come home. Virender asks Ayush not to go to save anyone from now. Ayush gives the money bag to Rishi. He teases Rishi for his wonderful smile, because of Lakshmi. He asks Virender and Rishi why don’t they give him any credit for saving Shalu. Lakshmi calls Ayush to thank him for saving Shalu.

He is delighted and tells that she is really nice that she appreciates his good deeds. He asks Rishi to talk. Neelam reaches there and slaps Rishi. Lakshmi hears their arguments on the call. Virender asks Neelam why did she slap Rishi. She asks him not to say anything in between. She accuses Lakshmi. She reminds Virender that even he had slapped Rishi because of Lakshmi. She feels she did right to slap him. She tells that Rishi has done a wrong thing. He defends his son who did a commendable work today. Rishi tells that he is fine, she would be worried for him. She cries for him.

Neelam tells Rishi that Balwinder could have done any harm to him. She asks him not to put himself in danger for anyone, not even Lakshmi. Lakshmi hears them and feels bad. Neelam asks him why did he go there against her word. She tells that she didn’t stop him, though she felt bad. Karishma, Malishka and everyone look on their emotional conversation. Neelam tells that its her values and upbringing that he is so helpful. She asks him why didn’t he give the money and come back, why did he go to fight Balwinder. She tells that she can’t tolerate if anything happened to him.

He replies that even Lakshmi had risked her life for his sake again and again. He wants Neelam to understand him, he can’t live with anyone’s favors. He feels indebted to Lakshmi. He tells that he got the chance to help her. He asks Neelam to understand, he just helped Lakshmi like she always helped him. Lakshmi gets emotional. Rishi asks Neelam not to misunderstand him. He promises to never go against her. he asks her why is she getting so angry on him. He knows that Neelam trusts him and he also trusts her a lot. He adds that he misses to see her happy. He also wants to stay happy.

He tells that he would have not kept anyone’s favor and helped the person, even if it wasn’t Lakshmi. He hugs Neelam. He tells that he loves her a lot. He goes to his room. Shalu and Bani ask Lakshmi what’s the matter. Ayush also takes a stand for Lakshmi and her family. He also goes against Karishma. He tells that he has the same answer as Rishi. Karishma tells that she can’t explain Ayush when Rishi is wrong. Neelam tells that its not Rishi’s mistake, Lakshmi is at fault. Shalu asks Lakshmi if Ayush told something. Lakshmi tells that she isn’t sad, they should go and sleep now. She hugs her sisters and sleeps. Malishka talks to Neelam and Karishma about Rishi and Lakshmi. She doesn’t think Rishi did right.

She asks him how did he get hurt. She accuses Lakshmi. She tells that Lakshmi is the reason for his wound, he shouldn’t expect her to give him sympathy. He tells that he didn’t ask for sympathy, he just shared that he has pain in his hand. She tells that he always stays with Lakshmi. He tells that Lakshmi isn’t staying with him in his house. She angrily asks him to get Lakshmi home. She sits to do the first aid to his wound. He asks her to go, because he is feeling sleepy. She angrily goes away. He wants to tell Lakshmi that he is hearing all the taunts for her sake. Both Rishi and Lakshmi think of each other, when they lie to sleep.

Reviewed Rating for Bhagya Lakshmi 1st April 2022 Written Update Shock for Rishi: 3/5 This rating is solely based on the opinion of the writer. You may post your own take on the show in the comment section below.