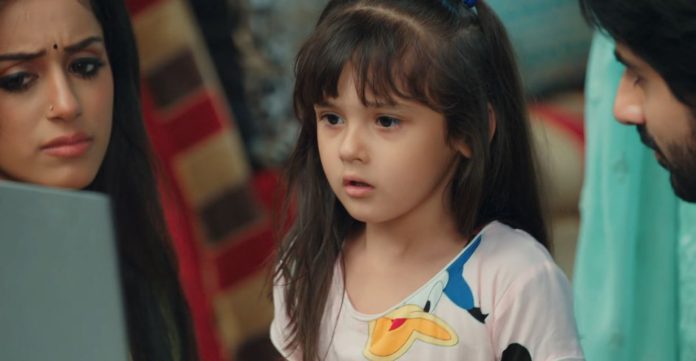 Yeh Hai Chahatein 2nd April 2022 Written Update Ruhi track Prisha asks an intoxicated Rudra if he drank hemp. Rudra replies no, but feeling very happy. Prisha goes inside the house to get sweets from the kitchen as Sharda asks her to. Hearing and seeing this, Yuvraj follows Prisha inside the house. On reaching the kitchen, Prisha feels heavy-headedness. She falls in Yuvraj’s arms and he looks at her with evil intentions. Yuvraj angrily tells unconscious Prisha that he always reaches to help her but she never trusts him. He says now he will do something with Prisha that will ruin her and Rudra’s life.

Yuvraj takes Prisha upstairs to her and Rudra’s room. On the other hand, Ruhi and Saaransh find Rudra intoxicated. They start taking Rudra to his room to rest. Sharda and Vasudha also get to know that Rudra is intoxicated. Vasudha tells Sharda that GPS is also in a similar condition. She informs Sharda that GPS is in the taxi and they are leaving for home now. Sharda tells Saaransh and Ruhi that she is sending someone to help them to take Rudra to his room. Saaransh asks Sharda to not worry as he and Ruhi will manage.

After reaching Rudra’s room, Yuvraj makes unconscious Prisha lie on the bed. He sits beside her and reminds her that she told him that he takes advantage of her, every time he enters her life. He says now he will tell Prisha what is the real meaning of taking advantage. Yuvraj laughs, asking to imagine Rudra’s reaction, when he will get to know that something wrong happened with his wife, that too in his room. He says he would have killed Rudra if he would have been in his place. He asks unconscious Prisha how will Rudra be able to see her after this.

Yuvraj says he will make his and Prisha’s bedroom video and throw it on Rudra’s face. He says after this Rudra will remember him only on every holi and on seeing Prisha’s face every time. Yuvraj applies the camera at a location to record his and Prisha’s bedroom video. He also closes the room door and goes inside the bathroom to wash his face. Before he could wash his face, he hears Rudra, Saaransh and Rudra’s voice from outside. Ruhi and Saaransh sees Prisha sleeping inside and makes Rudra lie beside her.

Outside, Sharda asks dancers why they stopped dancing. The dancers tell Sharda that their 4th dancer is missing and they can’t perform without him. Sharda asks the dancers to perform anyhow as she has paid them in advance. She also asks them to make a call to their 4th dancer. Irritated Yuvraj doesn’t receive his partner in crime’s call. He switches off his phone. Dance group members tell Sharda that their 4th dancer isn’t picking up their call. Sharda asks them to call someone else and continue their performance. On not hearing Ruhi and Saaransh’s voice, Yuvraj gets happy thinking that now he can make a video with Prisha alone.

He washes his face. Prisha and Rudra gain consciousness. Both of them caress and hug each other, saying, “I love you”. Yuvraj witnesses this from the bathroom door. He gets angry seeing Prisha and Rudra in each other’s arms. Yuvraj closes the door and feels stuck inside the bathroom. Prisha leaves towards the bathroom to freshen up. Yuvraj hides behind bathroom curtains. Prisha tells Rudra that she will return after a 5 minutes bath. Yuvraj gets scared hearing this and thinks that Rudra and Prisha will beat him black and blue seeing him in their bathroom. He also gets scared thinking that he may get arrested too and decides to leave.

Prisha opens the curtains and starts bathing. Yuvraj is seen outside in his car. He recalls how he ran away from Rudra and Prisha’s bathroom through a small window. Yuvraj thinks Rudra and Prisha are very lucky and have some strong connection with God, that they get saved every time. He says he will himself do something, if God doesn’t want to help him. Yuvraj gets determined to separate Rudra and Prisha by any means. He takes it as a challenge and asks to try to stop him if possible.

She says she is tense thinking who made her drink hemp. Rudra suspects Yuvraj. Prisha reminds Rudra that he told her that he has asked the police to catch Yuvraj. Rudra calls the Inspector. Inspector informs Rudra that Yuvraj has not been caught till now but their one team is keeping a watch, standing outside Yuvraj’s house. He also tells Rudra that Yuvraj can’t escape from Delhi as they have sealed all the exit points and raised alerts on all roads, airports, bus stands and railway stations. Rudra disconnects the call, asking Inspector to call him if he gets any update about Yuvraj. Rudra tells Prisha that his doubt was right as Yuvraj hasn’t been caught yet.

Rudra says this means Yuvraj came to their holi party. Prisha asks Rudra why they didn’t recognize or see Yuvraj anywhere if he came to their party. Rudra tells Prisha that he got CCTV cameras, attached everywhere in their house, as he knew that Yuvraj won’t be able to tolerate seeing them happy together and will try ruining them and their happiness. On the other hand, Yuvraj is seen at a hotel’s reception and asks for a room. The receptionist asks Yuvraj to give his od for verification. Yuvraj asks the receptionist if he asked for his hotel’s id. He scolds and tells the receptionist that his hotel isn’t a 5-star, for which he should his id.

Receptionist tells Yuvraj that he will have to submit his id as per the government norms. Yuvraj tells the receptionist that he is a lawyer and can get his hotel raided. Receptionist leaves to attend his call, giving the key to Yuvraj. Yuvraj sees two contables and hides his face in the newspaper. He even successfully escapes police constables, when they ask him about the hotel’s restaurant. Yuvraj guides them towards the restaurant. He thinks he is wandering here and there because of Rudra and Prisha. Yuvraj tells himself that he will also get a chance to ruin Rudra and Prisha’s life.

At Khurana house, Rudra and Prisha are seen watching CCTV footage of the holi party. Sharda comes to call them for dinner. She asks them what they are doing. Prisha tells Sharda that they are watching holi footage. Sharda asks them to stop the footage on seeing Dev and his friends in it. She tells Rudra and Prisha that she and Vasudha scolded Dev and his friends for throwing dirty water balloons on GPS. She says GPS’s eye got hurt because of their actions. Rudra asks Sharda who these boys are. Sharda says when she asked the boys, they told her that they are Saaransh’s friends. Saaransh and Ruhi come there and Saaransh says these boys aren’t his friends as he didn’t call any of his friends to the holi party.

This shocks everyone. Ruhi closely sees the footage and says she knows who these boys are. This also shocks everyone. In the next episode, Prisha will show Dev’s photograph to the school peon and ask him who he is. Peon will tell Prisha that it’s Dev Choudhary. Prisha will make a complaint against Dev’s ill mannered behavior to the principal. She will also ask the principal to punish Dev. Dev and his evil friends will overhear all this. Rudra will ask Prisha if she got to know who was the insolent boy, who came to their holi party. Prisha will reply yes. Dev and his friends will get Prisha’s cabin key from the peon and will plan something evil to make Prisha’s life hell to get revenge on her for making a complaint against them to the principal.

Reviewed Rating for Yeh Hai Chahatein 2nd April 2022 Written Update Ruhi track: 4/5 This rating is solely based on the opinion of the writer. You may post your own take on the show in the comment section below.