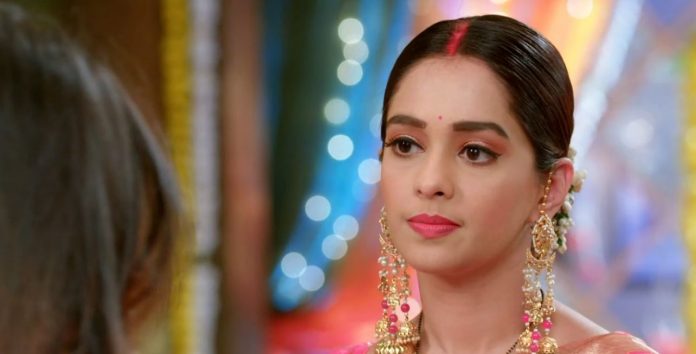 Kumkum Bhagya 5th April 2022 Written Update Prachi bemused Prachi doesn’t trust Ranbir. She tells that her heart wants to trust him, but her mind is stopping her from making another mistake. She has no faith that he isn’t cheating her. She is ready to apologize to him and fall in his feet if he is proved innocent, but till then she doesn’t want to subside her ego and stubbornness. She tells Shahana that she will not let Ranbir and Rhea perform the puja together. She takes Ranbir as a winning trophy once again, and competes with her sister. Prachi doesn’t know that Rhea is wrong, and also an evil figure who is plotting her murder. Shahana tries to help Ranbir find a proof of his innocence. She wants to see Prachi and Ranbir uniting.

Ranbir also tries to get the CCTV footage which can bring out the culprit in front of everyone. Aaliya cleverly manages to foil his plans. She doesn’t want Ranbir to spot her or Rhea in the footage. Aaliya hurries Ranbir to perform the puja with Rhea, but Dida intervenes to make Pallavi realize that Prachi is her Dharm Bahu, and Rhea is just her assumed Bahu. Dida determines to not let Prachi’s rights go to Rhea. Even Prachi makes up her mind that she won’t let Rhea snatch her rights. She feels she is Ranbir’s wife and only she deserves to be with him. Nick arrives home in a disguise and plans to kill Prachi. He assures Rhea that the day is going to be the last one for Prachi. What troubles will occur for Prachi? Will Rhea’s evil plan expose her, and become a reason for Ranbir and Prachi’s union? Keep reading.

Ranbir asks Pallavi is she okay. She asks him if he has taken Prachi’s permission to come to his mom and talk. She is confused by his actions. Ranbir apologizes to her. She asks him not to say sorry, when he doesn’t realize his mistakes. Aaliya overhears them. Pallavi asks Ranbir to let the puja complete with peace, and stop arguing. Aaliya tells that hats off to Pallavi that she has indirectly asked Ranbir to sit in the puja with Rhea. Pallavi tells that she didn’t try to manipulate her son, she just spoke out what was there in her heart. Vikram asks Ranbir and Jai to not discuss work.

Ranbir stays busy on call. He gets to see Prachi. Dida and Shahana see Prachi and Ranbr together. Rhea pushes Shahana deliberately and hurts her. They end up arguing. Dida scolds Rhea. Pandit asks Pallavi and Prachi to prepare for the puja. Pallavi asks Ranbir to have water and then come for the puja. Ranbir agrees. Jai asks Ranbir to check the file. Pallavi gets glad seeing Rhea. Ranbir and Prachi have a moment. Nick reaches home. Rhea welcomes him. She tells Pallavi that she has got an extra worker for extra work. Pallavi asks him to go to kitchen and do the work. Nick tells that he knows his work well. Shahana thinks why did Rhea hire Nick. Nick sees Preeti and winks to her.

They get into an argument. He asks her why is she making an apology after hurting him so much. Prachi throws away the juice and tells that she hopes he is happy now, that she has ended his hopes. He tells that she can ruin everything for the sake of her ego. She tells that its not her ego. He asks her what was that, if its her mood swings. Jai witnesses their argument. Rhea sees Ranbir and Prachi and takes Nick away. Jai asks Ranbir the matter. Ranbir tells that they will go and sit in the puja. Nick tells Aaliya and Rhea that he will use the chandelier for killing Prachi.

Aaliya asks him to stick to their plan. Prachi makes Rhea stumble down and sits in the puja with Ranbir. Aaliya gets worried for Rhea. Ranbir asks Prachi not to provoke him, if he questions her, then she can’t answer him. Rea asks Prachi to get up, its her place. Prachi asks her if its name is written there. Rhea asks her to not do this drama. Prachi tells that she is Ranbir’s real wife. She taunts Rhea for being the illegal Sautan.

Reviewed Rating for Kumkum Bhagya 5th April 2022 Written Update Prachi bemused: 4/5 This rating is solely based on the opinion of the writer. You may post your own take on the show in the comment section below.