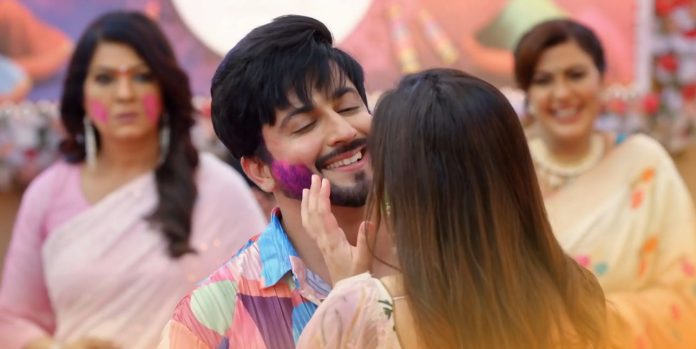 Kundali Bhagya 5th April 2022 Written Update Karan’s kiss Sameer and Shrishti get worried for Preeta and Karan’s fight. Sameer doesn’t want Karan to be around Natasha, knowing that Natasha is always trying to woo Karan. He doesn’t like Karan making Preeta jealous by his silly over-friendly plans with Natasha. Sherlyn gets the drugs handy by someone. She spikes the thandai drink for Karan. She meets Natasha and reveals her plan to her. She asks Natasha to feed the spiked thandai to Karan some way and then she will get him her way. She tells that once Karan gets intoxicated, it will be too easy for Natasha to win him over, she can take an advantage of his intoxicated state.

Natasha likes her plans. She tells that their plan was the same last time, when she faked her birthday and tried to spike Karan’s drink, but Preeta’s comeback had spoiled everything for them. Natasha aims to get Karan. She takes the thandai for Karan. Preeta confronts Karan for playing holi with everyone except her. She tells him that he didn’t play holi with her when she wanted. Karan takes the water gun to shoot the colours at her. She refuses to play holi with her, because he didn’t listen to her.

He asks her when did he say that he will listen to her. He shouts happy holi and shoots the colours at her. Preeta tries to run away. Karan colours her in his colours. The family members clap for them. Preeta asks Karan why did he put the coloured water when she had refused to play holi with him. She cutely scolds him, while he draws her closer and gives her a kiss on her cheek in front of everyone. Preeta gets a pleasant shock by his naughty move. Rakhi laughs seeing their romantic banter. Shrishti and Sameer also get glad seeing the romance back in Karan and Preeta’s lives.

Natasha follows Sherlyn to know what are her plans. Sherlyn tells that she will not tell her plans to anyone, not even Prithvi. She tells that she has to tell her something. Natasha asks her what is she planning. Sherlyn shows the drink and tells that the drink isn’t for her, but for Karan, the thandai has bhaang mixed in it. She asks Natasha to take control of intoxicated Karan and plan a honeymoon with him. She wants to give this good news to Prithvi. She plans to get Natasha and Karan married by using this dramatic twist. She asks Natasha to be careful of Sameer and Shrishti. She tells that Rakhi can do anything for Preeta, she will support Preeta to get Mahesh out of the basement.

She asks Natasha to feed the spiked drink to Karan and then take him to the room. They plan to defame Karan and get sympathy for Natasha. Natasha understands her plan. She goes to Karan. Preeta tells that Karan isn’t playing holi with her. She stops him to ask him, but he ignores her. Shrishti worries seeing Karan and Preeta away. She wants to help them. Sameer stops her. He tells her that he knows that she is Karan and Preeta’s well wisher, but she shouldn’t interfere between them. She feels troubled that Karan isn’t playing holi with Preeta. He bets that Karan and Preeta will play a superb holi together and have fun. He asks her to come on a long drive with him if he wins. She agrees. He prays that he wins the bet. Karan corners Preeta and gets into a romantic moment.

Karan applies her the colours. They get closer. Preeta makes Karan away. Karan questions her to know if she has a problem by his touch. He holds her closer and hugs her. He catches her lie when she tells that she has nothing to say. He tells that he has seen her when she wanted to talk to him, she was complaining that he didn’t play holi with her. He tells that their holi should be special. He tells her that he will never cross his limits until she accepts him by all her heart. He wishes her happy holi. Preeta runs after Karan to stop him. She isn’t able to tell him anything.

He kisses her and goes away. Naagre and Pradeep have an argument with Naagre asks him to forget the thandai and try to get the papers. Pradeep tells that he will break the lock. Naagre doesn’t know Sherlyn is Prithvi’s friend or enemy. He wants to talk to her. Natasha scolds Naagre for teasing Sherlyn. Pradeep thinks Naagre is a characterless man that he is teasing the girls. Sherlyn asks Naagre how dare he tease her. Pradeep defends Naagre and lies to them. Preeta finds them arguing. She asks Naagre to go to the kitchen and work. Sherlyn asks Naagre if he is a cook.

Natasha tells that Naagre is fooling them. Preeta asks them to get the snacks for the guests. Pradeep asks Naagre to say sorry to Preeta. Sameer finds Karan smiling and asks didn’t he fight with Preeta. Shrishti asks Karan the same thing. Karan tells that he doesn’t fight with Preeta, she fights him always. She tells that Preeta was upset that he didn’t play holi with her. Karan tells that he had teased Preeta. Natasha tells that she feels tensed when Preeta is around. Sherlyn asks her to just focus on her work. She tells Natasha that Karan will be surely with Preeta.

Reviewed Rating for Kundali Bhagya 5th April 2022 Written Update Karan’s kiss: 4/5 This rating is solely based on the opinion of the writer. You may post your own take on the show in the comment section below.