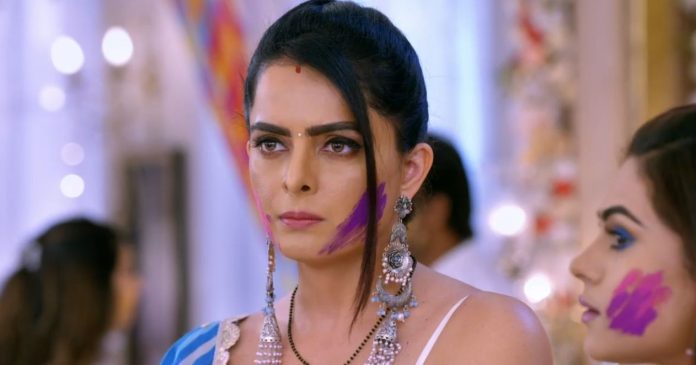 Kundali Bhagya 6th April 2022 Written Update Sherlyn strikes Karan suddenly kisses Preeta in front of everyone, and surprises her. Kareena, Kritika, Sherlyn and Natasha are the ones who aren’t happy with their moment. Karan loves Preeta and proves it to her by showing his affection in front of everyone. Rakhi supports Preeta. She wants Karan and Preeta to stay happy together. She finds them happy and wishes that everything gets fine. She tells that they are able to stay happy because there is no negativity in the house, after Prithvi left. She tells them that Prithvi shouldn’t come back. Preeta makes sure that Prithvi doesn’t return. She wants to make a plan to send away Sherlyn to the jail as well.

Sherlyn plans to separate Karan and Preeta, and get him married to Natasha. She tells that she will make sure that Luthras believe her fake tears and get Karan married to Natasha, knowing Preeta and Karan’s marriage is just namesake now. Pradeep tells Naagre that they shall focus on making Preeta out of the house, then there will be no need to get Prithvi’s important papers. Naagre asks him not to give any lecture and just focus on the task. They attempt to reach the basement and steal the papers. Keep reading.

Karan tells Shrishti that he teased Preeta by not playing holi with her, so she got jealous, she had much in her heart, she wanted to scold him and express much emotions. He asks her not to ask such things. Sameer smiles. She asks Sameer not to laugh, Karan can scold her. Karan tells that Preeta will feel bad that he didn’t play holi with her, she will not leave him and he will not leave her, they will play an amazing holi. Preeta realizes Karan’s love. She thinks Karan has made her quiet. Karan shouts Preeta. She asks him not to try to play holi with her, he missed the golden opportunity to play with her before. He tells her that he won’t listen to her. He plays holi with her. Preeta gets angry on him, while the family applauds Karan. She tells that she asked him not to play holi. He holds her close and kisses her. She is shocked, while he laughs happily. He dances to celebrate holi with her.

Sherlyn asks Natasha what was she doing, instead taking Karan to her room. She rebukes her for using her mind and going against the team. Natasha cries telling her that Karan and Preeta were lost in their own world, their relation is so pure and lovely. She praises their relation. Sherlyn asks her did she forget why she is here. She threatens to throw Natasha out of the mansion. She commands Natasha to get lost. Natasha gets reminded of her roots. She tells Sherlyn that she came to fulfil her dream, she will separate Karan and Preeta for her dream. She apologizes to Sherlyn.

She promises to win Karan. She tells Sherlyn that she will do everything that she is asked to do. Sherlyn gives her the drugs to spike Karan’s drink and then win him over. Naagre asks Pradeep to come and do the task. Pradeep spikes everyone’s thandai. Naagre asks him did he lose his mind to do this. Pradeep tells that he is doing this work. He reveals about his meeting with Prithvi after he got bailed out. Prithvi had warned him about Preeta. He asked Pradeep to faint Preeta first and then steal the papers, else she will intervene in their plan. He advised Pradeep to spike the drinks and faint Preeta someway, and also throw her out of the Luthra house. Pradeep explains the plan to Naagre.

Naagre tells that they have to do two tasks now, steal the papers and get rid of Preeta. He gets impressed by Pradeep’s thandai idea. He tells that they will kidnap Preeta if anything goes wrong. They see Girish at the door. They try to stop Girish from reaching Preeta and revealing their plans. They kidnap Girish. Naagre asks Pradeep to focus on their plan now. They look for Preeta. Naagre asks Pradeep to talk to him with respect. Pradeep takes the bhaang thandai for Preeta. Naagre goes to steal the papers. Karan finds Pradeep staring at Preeta. He gets angry and goes after Pradeep. He finds it odd.

Reviewed Rating for Kundali Bhagya 6th April 2022 Written Update Sherlyn strikes: 4/5 This rating is solely based on the opinion of the writer. You may post your own take on the show in the comment section below.