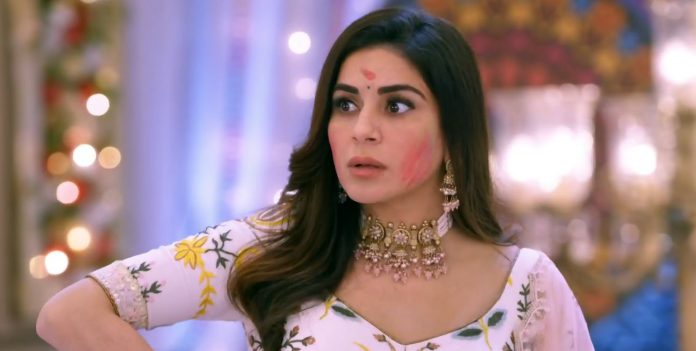 Kundali Bhagya 7th April 2022 Written Update Drunk Preeta Pradeep spikes the thandai drinks for everyone. Naagre also consumes the same thandai. He also gets intoxicated. He gets rid of his disguised look. He gets talking silly. He tells the Luthras that he has come secretly to have some important documents that belongs to Prithvi. Karan asks him what does he mean. Natasha signs Naagre not to tell anything. Naagre doesn’t limit himself. He ends up revealing Prithvi’s plan to the family. He tells Preeta and Karan that Prithvi has precious papers, its hidden in the house, Prithvi has sent them to steal the papers so that Preeta doesn’t benefit from it. He tells that Prithvi is worried that Preeta can get the papers.

Preeta is shocked to know this. Sherlyn is relieved that Preeta isn’t in her senses. She takes Preeta to her room, while Natasha takes an intoxicated Karan with her. Sherlyn meets Preeta and tells her that Karan and Natasha will celebrate their wedding night. She taunts Preeta. Preeta angrily slaps Sherlyn. She reacts even in an intoxicated state. Keep reading.

Earlier in the show, Naagre tells that they have to do two tasks now, steal the papers and get rid of Preeta. He gets impressed by Pradeep’s thandai idea. He tells that they will kidnap Preeta if anything goes wrong. They see Girish at the door. They try to stop Girish from reaching Preeta and revealing their plans. They kidnap Girish. Naagre asks Pradeep to focus on their plan now. They look for Preeta. Naagre asks Pradeep to talk to him with respect. Pradeep takes the bhaang thandai for Preeta. Naagre goes to steal the papers. Karan finds Pradeep staring at Preeta. He gets angry and goes after Pradeep. He finds it odd.

Karan stops Pradeep from staring at Preeta. Pradeep tells that he is a big fan of Karan, and also of his new friend PM. He tells that the thandai is made for someone specially. Karan thinks he is talking of Mahesh and Rakhi. He asks him not to give the thandai to them. Pradeep tell that its an order of a well wisher. Natasha angrily takes the thandai glass. Pradeep has to save one glass for Preeta. Karan goes after Preeta. Natasha also spikes a drink for Karan. Karan asks Preeta is she arranging bhaang for Mahesh. She tells that he would be liking to have it and putting the name on Mahesh.

He tells that he really liked playing holi with her. She tells that it wasn’t her type, she likes to play with colours, but not all that. She means to say about the kiss. He asks her what does she mean. She doesn’t answer him. Natasha asks Karan to have thandai. Karan tells that the thandai may be spiked, he will not drink it. She tells that she had taken the thandai from Pradeep. He tells that it would be for Mahesh. Kritika taunts Preeta on seeing her enjoy a lot. Preeta asks Kritika to enjoy too. She asks Sherlyn not to put negative thoughts in Kritika’s mind.

Pradeep tells Preeta that Karan has sent the drink for her. He tells that he is Karan’s big fan. She tells that she is also Karan’s big fan, so she married him. She drinks the thandai. Karan gives the glass to Pradeep and tells that Natasha had taken that glass. Pradeep tells that he will make fresh thandai for him. Karan calls him a true fan. He gets busy on a call. Naagre drinks the thandai by mistake. He asks Pradeep to have it. Pradeep really likes it. Karan also consumes the same thandai.

Shrishti asks Sameer for black coffee. He asks who wants it. She tells that Janki and Biji really need it after having the bhaang. She feels embarrassed. He tells that he will help her and make the black coffee. She goes alone to make it. Bani and Kareena also enjoy a sip of thandai. Pradeep is glad that they liked it. Rakhi meets Bani. Kareena offers the thandai to Rakhi also. Sameer also drinks and tells that the thandai was really good. Shrishti feels hungry and eats the sweets. She comes across Girish. She is shocked to see him unconscious. She shouts for help.

She sprinkles water on Girish and asks him is he okay. He tells her that Preeta is in a big danger. She worries for Preeta. She runs outside and tells the family that Girish was unconscious in the kitchen, he said that Preeta is in danger. She finds everyone drunk. Karan asks her what is she saying. Shrishti tells that she doesn’t know. Preeta tells that she is in her house between the family, she has no threat. Karan tells that its really scary. Pradeep tells that he is her big fan, he will reveal Preeta’s enemy. She removes Naagre’s beard and shows the truth. Shrishti and everyone are shocked to see Naagre. Naagre sings and dances, while Kareena claps for him. Karan also likes Naagre.

Naagre tells that they have come to steal Prithvi’s costly papers, Prithvi has sent them for this task. He reveals Prithvi’s plan. Pradeep tells that Prithvi asked him to kidnap Preeta if she interferes in their work. Preeta laughs on them. Karan tells that they don’t know Preeta, she is a problem herself. Preeta laughs. They both make fun of Naagre. Mahesh tells that he likes Karan and Preeta a lot. Rakhi tells that she likes Mahesh and her jodi. Just Sherlyn, Kritika and Shrishti stay sober and give expressions of tension seeing Naagre.

The family gets into Jagrata mood and sing a bhajan. Kritika tells that she will call the police. Sherlyn asks her not to create any big problem for Prithvi. She tells that they won’t know what’s right and what’s wrong, if Naagre is telling the truth or not, the family is already high. She tells that Prithvi would be doing right. Kritika thanks her. Sherlyn asks her to take the elders to the room. She wants to take Karan away from Preeta. Kritika agrees to her. Preeta gets to see Natasha and vents anger on her. Shrishti asks her to forget everything. She takes Preeta to the room.

Reviewed Rating for Kundali Bhagya 7th April 2022 Written Update Drunk Preeta: 4/5 This rating is solely based on the opinion of the writer. You may post your own take on the show in the comment section below.