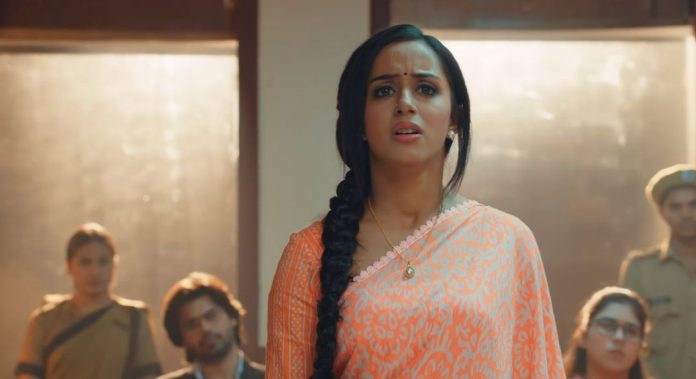 Yeh Hai Chahatein 6th April 2022 Written Update Twists Saaransh seeks Rudra’s help to stop the principal from getting Prisha arrested. Rudra explains to Saaransh that being Khurana School’s trustees, they are answerable for the drug case that occurred in their school. He says that they will have to call the police. Dev smirks hearing this. Saaransh asks Rudra how he can say this as Prisha is his wife and his mother. Rudra explains to Saaransh that rules are the same for everyone, regardless of whether it’s someone from their family. He says it’s also about their school image.

Dev and his friends smirks when Rudra asks the principal to call the police as they need to reach the root of this matter. A boy meets Ruhi in the classroom and tells her that they won’t keep friendship with her now as her evil mother almost killed some school students by drugging their chocolates. Ruhi asks the boy to not say anything wrong about her mother and asks why her mother will drug kids. The boy tells Ruhi that because of her mother’s chocolates, many children are admitted to the hospital. Ruhi runs to Prisha, when the boy tells her that police came to arrest her mother.

The culprit peon is seen standing outside Prisha’s cabin with Dev and his friends. Inspector enters and the Principal shows and tells him about the drugged chocolates. He also tells the inspector that Dr. Prisha accepted that she gave the above kept chocolates to the students. Inspector with his team checks the chocolates forensic reports as well Prisha’s cabin, before arresting her. Meanwhile, Prisha tells the inspector that she gave these chocolates to the students but doesn’t know how drugs got mixed in the chocolates. She says she doesn’t have any drugs with her. At the same time, a constable finds a drug packet hidden in Prisha’s cabin.

Everyone gets shocked seeing this. Inspector checks the packet and confirms that they are drugs only. The inspector asks Prisha how drugs got found in her cabin drawer. Prisha tries to defend herself but the inspector refuses to believe Prisha. The principal asks Saaransh if he will still say that his mother is innocent. Prisha again says she doesn’t know how this drug packet came in her cabin drawer. She says someone is trying to trap her. The inspector tells Prisha that they will have to arrest her for now as all the proofs found till now are against her. Dev feels very happy thinking that he taught a lesson to Prisha for messing up with him.

Running towards Prisha’s cabin, Ruhi falls down in the corridor and screams, “Mumma, Mumma… . Dev hears this and sees Ruhi fallen. He decides to punish Ruhi for messing up with him. Dev decides that he won’t let Ruhi meet her mother as all this happened because of her. He asks the bad peon to stop Ruhi from entering Prisha’s cabin anyhow. The peon doesn’t let Ruhi go to meet Prisha. Ruhi starts crying and sits outside. Aaliya runs to crying Ruhi and asks her what happened. Ruhi tells Aaliya whatever happened. Aaliya takes Ruhi inside Prisha’s cabin from another way/route.

Ruhi runs and hugs Prisha. She asks Rudra and Saaransh to do something and save her mother. The female constable walks forward to make Prisha wear the handcuffs but someone comes there. He hands over a pendrive to Rudra and leaves. Rudra stops the police from arresting Prisha. He says Prisha saves lives, not kills anyone. Rudra reminds the principal how Prisha saved kids lives from the bus incident as well as school’s bomb blast. He says he already knew that Prisha isn’t the culprit and thus ordered the school footage. Rudra also says that he got CCTV cameras applied in the whole school after bomb blast incident.

He starts playing the footage. The footage shows Tarun exchanging Prisha’s cabin chocolates and hiding drugs packet in her cabin drawer. Later, Dev and his friends wonder why Prisha hasn’t been handcuffed till now. Rudra shows the footage and the culprit’s (Tarun’s) face to everyone. He says his wife is innocent and he hid the truth for sometime intentionally as he was waiting for proof footage and he also didn’t wanted the real culprit to get doubtful. Flashback shows Rudra telling Prisha that he has planned something. He also says that he won’t spare the person who tried trapping her and drugging their school kids. Rudra further tells Prisha that the real culprit will regret now. Flashback ends.

Rudra sees the real culprit Tarun standing outside. Realizing danger, Dev and Vicky run away leaving Tarun in trouble. Rudra runs to Tarun and catches him. He asks Tarun why he trapped Prisha. Tarun recalls Dev’s threats. Prisha asks Tarun what she did to him that he tried trapping her. Police ask Rudra to not worry as they will get the truth out of Tarun in the police station. They arrest Tarun and take him away. Ruhi and Saaransh hug Rudra and Prisha. At night, Sharda asks Prisha why Tarun tried trapping her. Prisha says she is thinking about the same thing. Saaransh suspects Dev behind making Traun trap Prisha. He tells Prisha and family that he has seen Tarun hanging out with evil Dev, who secretly entered their holi party. Everyone gets shocked hearing this.

On the other hand, Dev gets Tarun released from prison by bribing a constable. Tarun asks Dev what about his damaged reputation in school. He says he got rusticated/expelled from school. Dev asks Tarun to stop crying and not take tension. He tells Tarun that he will get him back to school by talking to the principal. Dev gets determined to give bigger miseries to Prisha for getting his friend Tarun arrested. Prisha recalls Dev smirking outside her cabin, seeing her in trouble. She suspects that Dev tried trapping her by using Tarun as a scapegoat. Prisha thinks to talk to Principal about this and not trouble her children or Rudra.

She gets determined to spare Dev and to teach him a good lesson. Next morning, Saaransh informs everyone that he took admission in Khurana school as he wants to spend time with Prisha and Ruhi. Prisha tells Rudra that they wanted to inform him yesterday but the drug issue happened. Ruhi says now she will enjoy going to school with both Prisha and Saaransh. Sharda says now she won’t feel tense as all three; Prisha, Ruhi and Saaransh will be together and keep each other safe. Rudra says it’s not good. Everyone asks why. Rudra asks what about, everyone left him alone. He says this isn’t fair, he will also go to school.

Saaransh tells Ruhi that because of all this we are proud of Rudra. Ruhi tells Rudra that he is a real hero but he is still silly. She asks Rudra what he will do by going to school. Prisha asks Rudra to stop behaving kiddish and go to the studio. Rudra feels disappointed. Ruhi and Saaransh tease Rudra for not being able to come to school with them. Sharda asks kids to not tease her son (Rudra). Rudra thinks that he needs to do something to be in school with his family. On the other hand, Yuvraj tries fooling the hotel manager to let him stay one more day at his hotel. The hotel manager gets angry and makes security throw Yuvraj out.

Yuvraj gets angry and blames Rudra and Prisha for his miseries. At school, Ruhi and Aliya meet each other, Saaransh gets mesmerized seeing Aaliya. He runs towards Aaliya and gives her her fallen handkerchief. But again he gets lost in Aaliya and Ruhi notices it. “Ek Ladki ko Dekha toh aisa laga”, keeps playing in the background. Saaransh leaves telling Ruhi that he will meet her in the cafeteria, during the lunch break. Ruhi wonders why Saaransh is telling her this in a loud voice or by shouting. Later, she realizes that Saaransh was shouting his location because he wanted Aaliya to come there. But Ruhi misinterprets a wrong thing that Saaransh took admission in Khurana school to be near Aaliya, not for her (Ruhi).

Later, Prisha goes to meet the principal, thinking to tell him that she suspects that Dev made Tarun a scapegoat for him, in his plan of trapping her. Ruhi and Saaransh also enter Principal’s cabin before Prisha could talk to Principal about her suspicion on Dev. Principal informs them that a new music teacher has joined their school. They get surprised as well as shocked seeing Rudra as Khurana school’s new music teacher.

Reviewed Rating for Yeh Hai Chahatein 6th April 2022 Written Update Twists: 4/5 This rating is solely based on the opinion of the writer. You may post your own take on the show in the comment section below.