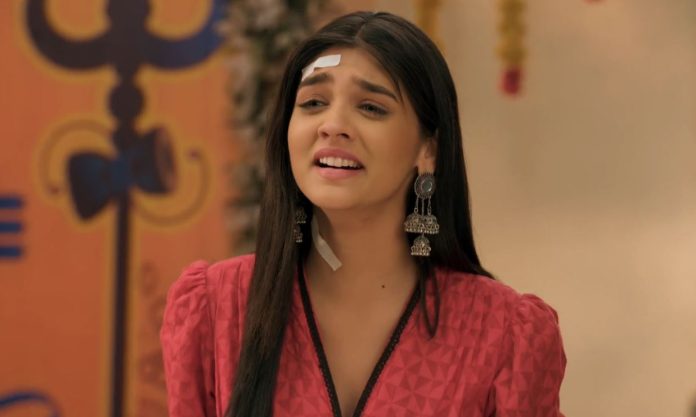 Akshara switches on her phone camera and starts taking a selfie with the young patient. Abhimanyu asks Aarohi to go and do her work as young patient doesn’t need 24*7 observation. Aarohi says she will stop. Akshara receives Kairav’s call and starts taking Abhimanyu for their pre-wedding photoshoot. Before leaving, Akshara orders Aarohi to take out time and come for the family photoshoot. As Akshara and Abhimanyu leave, the young patient asks Aarohi why she suddenly seemed scared. Aarohi thinks this young patient/child is extra smart and she should do something about him.

At the pre-wedding photoshoot venue, Kairav is seen helping Reem a little. Reem says Vansh is very talented. Kairav tells Reem that she can’t even imagine how much knowledge Vansh has about many things, which even others don’t know. From a distance, Vansh stares at Reem with love and hope. Swarna, Akhilesh and Manish praise Vansh’s talent and preparations. Manish tells Vansh that with a little more hard work, he will rise even above professional people. Swarna tells Vansh that it feels like a film set up instead of a pre-wedding photoshoot. Manish starts flirting with Swarna. Vansh takes Manish and Swarna’s couple photos.

Swarna gets emotional and says that everyone lives memories, no matter who is getting married. Manish asks Swarna to save her tears for Akshara’s farewell. At the hospital, Abhimanyu keeps trying to escape the pre-wedding photoshoot. He asks to go on another date with him rather than having a pre-wedding photoshoot. A nurse comes and takes Abhimanyu for an emergency case. As Abhimanyu leaves, Akshara explains to herself that she will have to get habitual of all this and adjust accordingly as she is going to become a doctor’s wife. She calls Kairav and informs him that she and Abhimanyu will get a little late as Abhimanyu got busy in an emergency case.

Aarohi feels scared and angry as the accident thing is not going away from her life. She fears that the young patient may tell Abhimanyu and Akshara the thing that she is hiding from them. Aarohi gets scared with Akshara’s sudden tap on her shoulder. She asks Akshara why she didn’t leave for her pre-wedding photoshoot till now. Akshara tells Aarohi that Abhimanyu got busy in an emergency case and they will leave after that. Aarohi asks Akshara to wait for Abhimanyu as she has to complete her rounds in the ward. Akshara asks Aarohi if she is fine as she seems tense. Aarohi says she has just work stress. Akshara sits and waits for Abhimanyu.

Abhimanyu seems busy in the operation theater. Vansh tells Kairav that the camera belongs to them but light and other things are to be returned to a friend, from whom he borrowed all this. Reem says Vansh’s friend also has his photoshoot lined up after Abhimanyu and Akshara’s pre-wedding photoshoot. Akshara keeps waiting for Abhimanyu. The present time is 4pm. Vansh calls and asks Akshara if Abhimanyu will be busy for more time. Akshara tells Vansh that she doesn’t know that Abhimanyu is still in OT. Vansh tells Akshara that they had to return lights and other things they borrowed from a friend before 7 PM. Akshara and siblings get worried thinking that the photoshoot won’t be able to take place today. In OT, Abhimanyu tries to work fast.

After getting free from OT, Abhimanyu feels thankful to God that surgery went successful. He also starts feeling bad, thinking that Akshara would be very angry as their pre-wedding photoshoot got left behind. Abhimanyu gets worried on not finding Akshara at the place she was waiting for him. He goes to the music room to check on Akshara. Abhimanyu enters the music room and gets mesmerized seeing all decked up Akshara. He tells Akshara that she is looking very beautiful. Abhimanyu apologizes to Akshara.

Soon they start with the photoshoot in Abhimanyu’s surgeon clothes and Akshara’s singer getup. Harsh and Mahima look at the photoshoot from outside. Mahima starts talking ill about Akshara. She asks Harsh how he can let Akshara make everyone work according to her. Mahima also asks Harsh how Akshara can keep the pre-wedding photoshoot in the hospital. She leaves angrily. Abhimanyu and Akshara’s cute pictures start getting captured. Gonekas tells Abhimanyu and Akshara that they look perfect. “Dil se bandhi ek dor” starts playing in the background. Akshara also takes a surgeon getup for the photoshoot.

After this, Akshara and Abhimanyu wear a lehenga and sherwani respectively for their photoshoot. By taking photographs in a sheet, Abhimanyu and Akshara recall some similar moments from the past. With more photographs, Akshara and Abhimanyu recall more similar moments from the past. They also take pictures with #Abhira frame. Akshara takes Mahima and Harsh for the family frame. They join even being reluctant and hesitant. Akshara includes hospital staff too in the family picture. Aarohi too hesitantly joins the family photograph. Everyone starts checking their photographs in the album Mahima and Harsh excuses themselves.

Akshara tells Aarohi that children never lie. She recalls Aarohi’s tense behavior seeing Manjiri’s return and her requests to her during holi. Akshara joins all the dots and asks Aarohi if Manjiri’s accident also happened at the same spot, where their accident took place. Aarohi goes scared. Abhimanyu noticed the tension between Aarohi and Akshara. Arohi runs outside, Akshara also runs behind her. On finding both sisters missing, Abhimanyu also runs in search of them. He meets his private investigator in the hospital. Investigator tells Abhimanyu that he met a man from whose CCTV they can get Manjiri’s accident day’s footage.

On the other hand, Anand comes and asks Aarohi to come and assist him in a surgery. Aarohi uses the opportunity and agrees. As Anand leaves, Aarohi asks Akshara to leave nonsense things behind and focus on the important ones. The investigator tells Abhimanyu that the man is asking for 5 lakh rupees to show them the footage. Abhimanyu asks the investigator to send him that man’s no., he will send him the money as he wants to catch the culprit anyhow. Investigator tells Abhimanyu that he will come to him with the footage as soon as he transfers the money to the man with the accident footage.

Akshara recalls her and Aarohi’s accident, how Aarohi was scared and talking about the accident in her sleep, Aarohi warns her to not talk about the accident anymore and the young patient’s confession saying that he saw Aarohi at the accident spot searching for something. She is about to fall in all the tension but Abhimanyu saves her. Abhimanyu asks Akshara what happened. Akshara recalls Abhimanyu angrily saying that he will for sure get his mother’s culprit punished. Abhimanyu asks Akshara if Aarohi said something harsh to her. Akshara lies to Abhimanyu that she got worried seeing Aarohi nervous as well as excited for her first surgery with Anand.

Abhimanyu tells Akshara that she almost scared him. Akshara apologizes to Abhimanyu. Abhimanyu asks Akshara to not worry as Aarohi may not be a good person but she is a very good doctor, moreover Anand is also with her. He hugs Akshara. Akshara feels apologetic towards Abhimanyu for hiding something from him as she herself doesn’t know the whole truth. She thinks she can’t tell anything to Abhimanyu till she talks to Aarohi properly. Aarohi on the other hand, hopes that Akshara doesn’t tell anything to Abhimanyu about whatever young patient said and thinks that other things she will handle herself.

In the next episode, Akshara will angrily ask Aarohi if Manjiri’s accident is somehow connected to their accident. Aarohi will scream, yes. Akshara will stare at Aarohi in shock. Aarohi will ask Akshara why she is glaring at her like someone died because of her. Akshara will get angry and will give a tight slap to Aarohi, shocking her.

Reviewed Rating for Yeh Rishta 6th April 2022 Written Update Akshara suspects Aarohi: 4/5 This rating is solely based on the opinion of the writer. You may post your own take on the show in the comment section below.