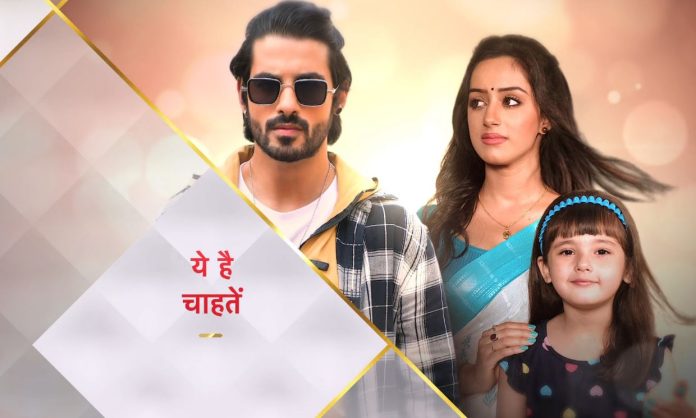 Yeh Hai Chahatein 7th April 2022 Written Update Huge twists Prisha, Ruhi and Saaransh get shocked to see Rudra as Khurana school’s new music teacher. Principal says he couldn’t have refused such a big Rockstar’s application to become their school’s music teacher. He says this way the school’s reputation will grow. Principal tells Prisha, Ruhi and Saaransh that he called them because Rudra wanted to surprise them. Ruhi, Saaransh and Prisha glare angrily at Rudra. Rudra asks them why. He says he also wanted to be with them. Ruhi calls Rudra as drama store/queen.

Ruhi and Saaransh tell Rudra that they knew that he can’t live without them and thus he will surely cook something up to be with them. Ruhi, Saaransh, Prisha and Rudra get happy knowing that now all four of them will stay together both at home and school. Prisha tells them they have to follow discipline in school. Rudra informs the principal and takes Prisha outside with him. Yuvraj gets upset knowing that his car’s petrol is almost finished. Yuvraj parks his car aside and wonders what he will do now as doesn’t even have the cash to get petrol refilled. He blames Rudra and Prisha for his condition.

Yuvraj says he can spend the night in the car but what about food. He sees some people distributing free food to poors and beggars outside a small temple nearby. Yuvraj walks to get free food but two constables come there searching for him. They question people about Yuvraj, showing his photograph. At the right time, Yuvraj turns his face, runs away and hides in his car. He curses Rudra and Prisha for making his condition worse. At school, during lunch break, Saaransh and Ruhi visit the cafeteria. Saaransh indirectly expresses his desire to sit with Aaliya. Ruhi understands it but troubles him. Later on Saaransh convinces Ruhi to let’s sit with Aaliya. Aaliya says hi to them.

Saaransh once again gets lost in Aaliya. Ruhi smirks, realizing Saaransh’s innocent attraction and liking towards Aaliya. On the other hand, Rudra takes Prisha to a beautiful restaurant. Prisha recognizes that it’s the same place where she and Rudra fought with each other as a couple. Rudra praises Prisha’s memory. Flashback shows Rudra getting late for his date with Prisha. Prisha gets angry at him. Rudra apologizes and lies to Prisha that got late because of rehearsals. Prisha asks Rudra to not lie as his manager told him that rehearsals ended a long time ago. Rudra again apologizes to Prisha and tells her that he got late because he met some fans on the way. He says he even had to make photos and videos with his fans.

He makes Prisha sit on the table. Waiter brings food. Rudra feeds food to Prisha. Prisha feels very happy. Rudra tells Prisha that he missed her a lot and yearned for this moment. Prisha tells Rudra that now she is with him. Rudra tells Prisha that he is double happy as she gave him his little Prisha. He expresses a little sadness saying that he couldn’t watch Ruhi growing up. Prisha decides to give Rudra a surprise that will increase his happiness. Prisha excuses herself from Rudra. She stands up and collides with Revathi. Prisha introduces Revathi and Rudra to each other. Rudra and Revathi recall their car hit incident.

Rudra tells Prisha that Revathi is the same woman who hit his car outside school. Revathi says she didn’t do it on purpose. She blames Rudra for that incident. Rudra says how he is at fault as Revathi hit his parked car. Revathi says she wouldn’t have hit his car, if his car wouldn’t have been parked there. Prisha tries to end Rudra and Revathi’s argument, saying that Rudra is a little careless. Rudra understands Prisha’s thoughts and sits back on the chair. Prisha asks Revathi about how her daughter’s project went. Revathi tells Prisha that the project went well and her daughter came 1st in her class. She thanks Prisha for helping her. She takes a leave from Rudra and Prisha.

Rudra asks Prisha how she can befriend a weird woman. Prisha says Revathi is a little weird but a good woman. She tells Rudra that Revathi saved her 4 rupees from the vegetable seller. She also tells Rudra that Revathi also focuses on her children’s studies. Rudra says he still finds Revathi somewhat weird. Prisha once again excuses herself from Rudra. At school, in the cafeteria, Saaransh weiredly answers Aaliya’s questions. Ruhi thinks this way, Saaransh will land in trouble. A boy goes to Dev and tells him that Aaliya is sitting and having lunch with a boy in the cafeteria.

Dev gets angry and wonders who dared to talk to Aaliya in his presence. Aaliya and Ruhi ask Saaransh to eat his lunch, otherwise lunch break will end. Saaransh says okay. Aaliya requests Saaransh to pass the ketchup bottle to her. While passing the ketchup bottle, Aaliya’s hand touch mesmerizes Saaransh. He gets lost in Aaliya. “Ek Ladki Ko Dekha Toh Aisa Laga”, plays in the background. Suddenly, water falls on his uniform. Dev reaches the cafeteria with the boy who informed him about Aaliya’s movements. He gets angry at the boy as he doesn’t find Aaliya in the cafeteria. Flashback shows Saaransh and Ruhi leaving to clean up and to dry Saaransh’s uniform. Aaliya also left as the “lunch break over” bell rings. Flashback ends.

Dev asks the informer boy if knows who was sitting with Aaliya. The informer boy replies that he never saw that boy in school, before today. Dev wonders who is the new boy, who dared to befriend Aaliya and sat with her. Rudra and Prisha return to school. Prisha and Rudra leave for their work. Prisha goes to Principal and asks him if he took any action on her complaint against Dev’s insolent behavior. Scared, Principal lies to Prisha that he contacted Dev’s parents but at present they are out of town. Prisha asks the principal, what about Dev’s insolence till then. She says Dev’s insolence is increasing day by day and she suspects Dev behind the drugs found in her cabin.

This shocks and scares the principal. He tells Prisha that Tarun was seen keeping drugged chocolates in her cabin, not Dev. Principal says even police arrested Tarun in front of her and Rudra. Prisha says it isn’t important that what they see is always the truth. She says that she suspects Dev behind making Tarun as his scapegoat in the drug issue. Principal asks Prisha if she has any proof to prove her allegations/accusations on Dev. Prisha says that she doesn’t have any proof but she strongly feels Dev is the real mastermind behind trapping her. Principal tells Prisha that they can’t accuse Dev, just because of her feelings.

He tells Prisha that she is thinking more than required about this case. Prisha says she was the one, who was getting trapped. She also says that if Rdura wouldn’t have saved her, the police would have arrested her. Prisha accepts that she doesn’t have proof against Dev about the cabin drug issue. She asks the principal if he took action against Dev, for entering her Holi party without invitation. Principal says he will surely take action against Dev for that. He says he will surely take action against Dev by meeting his parents as soon as they return. Prisha leaves disappointed. She feels that Principal sir is hiding something from her and saving Dev intentionally.

He asks Ruhi how he should express his feelings to Aaliya. Ruhi tells Saaransh that she will help him. This makes Saaransh happy. On the other hand, the principal goes to talk to Dev. He tells Dev that Prisha is suspecting him behind trying to trap her in the drugs case. Dev says Prisha is lying as everyone knows that Tarun trapped Prisha. Principal tells Dev that peon told him that he took Prisha’s cabin key from him. Angry Dev says, he won’t spare that peon. Principal asks Dev to keep control on his anger as Prisha is already suspicious of him. Angry Dev says firstly he will teach a lesson to Prisha only.

Principal asks Dev to not mess with Prisha as she is the mother of school trustee (Saaransh) and Rudraksh Khurana’s wife. With attitude, Dev says he doesn’t care. He says Prisha doesn’t know his parents. Vicky tells Dev that the principal is right. He says Tarun already got rusticated. Vicky tells Dev that Prisha won’t spare him if she gets to know his reality. Principal and Vicky ask Dev to not get involved in another problem. Principal tells Dev that after this, he will get forced to involve his parents. Angry Dev gets determined to get revenge on Prisha.

In the next episode, Vicky will inform Dev that the boy who is trying to befriend Aaliya is Saaransh Khurana. At night, Dev will get angry seeing Aaliya and Saaransh having ice-cream together. Dev gets determined to teach a lesson to the whole Khurana family. Rudra and Prisha will be seen spending a romantic time together. He will tell Prisha that now, no one can separate them. Yuvraj will decide to use his trump card and reveal the whole truth to Rudra. Next day, in school, Prisha will get worried seeing Saaransh crying and covered with black color all over his body and clothes.

Reviewed Rating for Yeh Hai Chahatein 7th April 2022 Written Update Huge twists: 4/5 This rating is solely based on the opinion of the writer. You may post your own take on the show in the comment section below.