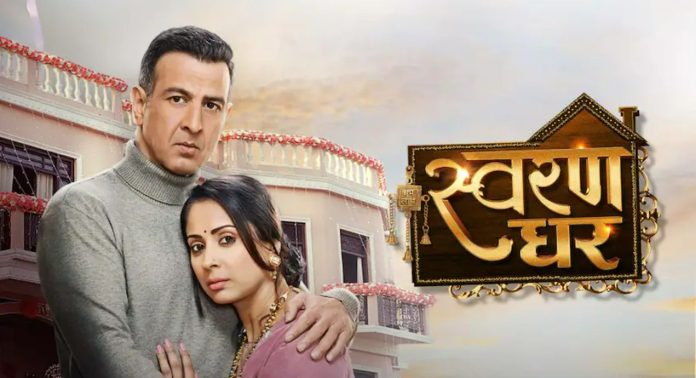 Swaran Ghar Fanaa Spy Bahu Parineetii Colors Spoilers Fanaa upcoming track – Pakhi’s final blow Yug informs Agastya that Ishaan is not present in his house. Agastya is shocked. He searches for Pakhi and runs towards her. An unknown girl wearing similar attire like Pakhi is sitting in her place. The girl handovers a black bouquet of flowers, Pakhi’s ring, and a letter to Agastya. Agastya is frantically looking for Pakhi. Pakhi is sure that Agastya has come to know that she is kidnapped. Pakhi wears a hijab and leaves the airport. Pakhi says that this was her last trap for Agastya. Will Agastya confess to his crime? Will Pakhi and Ishaan achieve success in putting Agastya behind bars?

Shorvori calls Ajit and informs him that the colony members are trying to remove Swaran from the colony. She informs him that Swaran is being humiliated by everyone. Ajit is shocked. Swaran catches hold of her main gate to avoid being kicked out. A man even throws a stone at Swaran and Shorvori shouts in fear. But before the stone can hit Swaran Ajit comes and holds it. Ajit saves Swaran from an injury. Will Ajit’s support make Swaran stronger and help her fight for justice?

Yohan questions his father about why he was not informed that a boy is coming to meet Drishti for an alliance. Yohan’s father answers that he did not find it necessary to inform him. Yohan gets angry and pours a glass of water on the grass. Yohan is about to get slapped but Veera stops her husband. Drishti confesses to Yohan that she is sure about this marriage. Sejal drops a hot tea on Drishti. The groom’s mother comes to know that Drishti is disabled and insults her. Yohan is enraged. How will Yohan react to Drishti’s insult? Will Sejal help Yohan to open his eyes?

Parineet asks Rajeev on a call if he reached but seems shocked. Gurinder asks Harman and Jaswanth to stop doubting them and their intentions. Harman warns Gurinder that Rajeev has only two weeks to search for a house in Chandigarh and take Parineet with him. Harman cautions that if Rajeev delays even for a day then he himself will go to Chandigarh catch hold of him and settle him here only. Gurinder calls Rajeev and informs him about Harman’s conditions. Harman and Jaswanth get to know the bitter truth of their village where the couple marries but later leave their wife and run away. They go to Rajeev’s house but find it locked. Both of them are astounded. How will Parineet tolerate Rajeev’s betrayal?