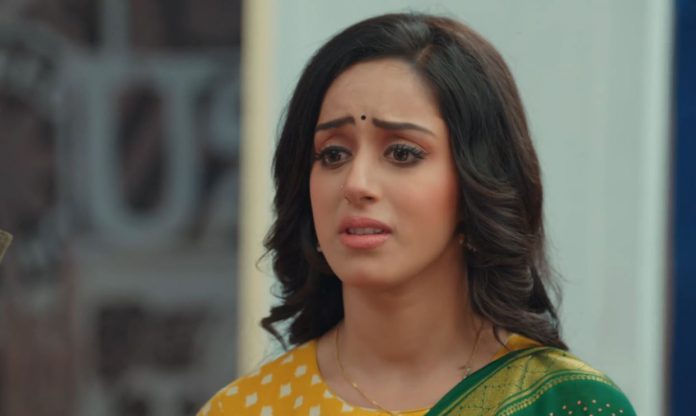 Yeh Hai Chahatein Upcoming track 9th April 2022 Written Update At school, the Principal announces that their school’s annual function will be held after 15 days. He asks interested students to get their names enrolled today as it’s the last date of participant enrollment. Everyone leaves for their classes. Aaliya stops Saaransh and asks him to perform on the annual day with her. She says she will dance and he can play guitar. Saaransh curiously asks if she is sure. Aaliya asks Saaransh if he has any problem in performing with her. Saaransh says he has no problem.

At the same time, Ruhi reminds Saaransh that he has a lot of school work and projects too as he joined as a new student in school. Hearing this, Aaliya tells Saaransh that she will help him in both homework and project. Ruhi says Saaransh won’t be in town at the time of annual day as he has to go somewhere with Rudra. Aaliya says how is this possible as where will Saaransh go, when Rudra will be here. She says, being a trustee, Rudra would be present in the school annual function. Aaliya finalizes that she and Saaransh will perform together on the annual day for sure. She leaves asking Saaransh to meet her in the practice room for practice and enrollment.

Saaransh asks Ruhi what will happen now as he in reality doesn’t know how to play guitar. Ruhi asks Saaransh to not worry as she is thinking of helping him in some way. On the other hand, Prisha goes to meet Rudra in the music room. She acts like a stranger and asks Rudra to teach her singing as her husband doesn’t like her singing. Rudra tells Prisha that her husband is right as she really sings out of tune. He asks Prisha to leave singing work on her husband only. Prisha starts leaving, telling Rudra that teachers never say no to teach their students. She says doesn’t want to learn from worthless and incompetent teacher. Rudra stops Prisha from leaving and brings her closer to him.

He tells Prisha that teachers can never be worthless and incompetent. Rudra gets romantic with Prisha, making her shy. Then he jokes with Prisha telling her that she can’t sing as the tutor can’t change her throat. This angers Prisha. Rudra makes Prisha smile by telling her that he can teach her how to play guitar. Rudra makes Prisha sit in his lap and gives her guitar lessons. In this process, they get romantic. After sometime, the school bell rings, Prisha gets up and starts leaving. Rudra stops Prisha but she leaves saying that kids will come.

Suddenly, Aaliya stops Saaransh and tells him that she knows that his bandage is fake and his fingers are fine. She also reveals that yesterday only, she understood that Saaransh doesn’t know how to play guitar as she herself knows how to play guitar. Saaransh apologizes to Aaliya for lying to her. He tells Aaliya that he wanted to tell her the truth and all this was Ruhi’s idea. Aaliya asks Saaransh why he lied to her. Ruhi tells Aaliya that Saaransh wanted to impress her. Aaliya tells Saaransh that she won’t get impressed by him on knowing that he plays guitar well or is a son of Rockstar. She further tells Saaransh that she is already impressed by him because of his kind and helping nature towards her.

Aaliya says she hopes that her brother would have been kind like Saaransh. Saaransh says thank god that now he won’t have to act, playing guitar. Aaliya asks Saaransh to dance in the annual function and she will play guitar. Saaransh says okay. Ruhi and Aaliya hugs each other. Dev gets angry on hearing that Saaransh is going to perform with his sister Aaliya in the school annual function. He decides to do something secretly to stop Saaransh from performing with Aaliya. After school, Prisha sits in Rudra’s car. She informs Rudra that kids are staying late in school for annual function practice. Rudra gets romantic with Prisha after hearing this.

On the other hand, Saaransh starts performing experiments in the chemistry lab with his teacher and other classmates. Suddenly, a chemical beaker blasts in Saaransh’s hand. Saaransh screams in pain. Dev and Vicky smirks seeing their plan getting successful. All other people get worried for Saaransh. They take injured Saaransh to Prisha. Prisha gets worried. Teacher tells Prisha whatever happened in the chemistry lab. Prisha starts tending to Saaransh’s wounds. Worried Rudra also runs to Saaransh. Dev and Vicky laugh seeing Saaransh and Prisha’s pain.

Prisha and Saaransh do some emotional talk. A student tells Aaliya that Saaransh got burnt in the chemistry lab. Aaliya decides to meet Saaransh and tell him the whole truth. In the medical room, Rudra and the teacher ask Saaransh how this incident occurred with him. Saaransh says he doesn’t know how this blast occurred as he only mixed the chemicals his teacher asked him to. Aaliya comes and tells everyone that she knows who did this blast. This shocks everyone. Aaliya reveals that Dev Choudhary is behind this blast. Everyone gets shocked. Prisha feels very angry. Aaliya says she heard Dev and Vicky talking about changing the chemistry lab beaker to make a blast occur.

Rudra asks why Dev did this. Aaliya says Dev is used to doing such pranks but she didn’t know that someday Dev’s prank will go this serious. Rudra asks Aaliya if Dev has any problem with Saaransh that he did this. Aaliya says Dev doesn’t like her talking to Saaransh. Prisha asks Aaliya, how does her friendship with Saaransh concern Dev. Aaliya shocks everyone by revealing that Dev is her elder brother. She goes to Saaransh and asks him if he is fine. Prisha tells Dev has crossed his limits now. In between, she spills out that Dev kept drugs in her cabin and trapped Tarun in that case. Rudra gets shocked and asks Prisha why she didn’t tell him earlier.

Prisha replies that she thought she would handle it herself, but never thought that this would turn into a big issue. She tells Rudra that she doubts that Dev is trapping Tarun. Prisha also tells Rudra that she complained to the principal sir too. She says principal sir told her that Dev’s parents are out of town and thus will meet him later on. Aaliya hears this and shocks Rudra and Prisha by telling her that her parents are in town only. Prisha says, this means that principal sir is saving Dev and not taking any action against Dev. Rudra tells Prisha that he would have helped her, if she would have told him all this earlier.

He says even Saaransh would have been safe today. Rudra says now he won’t spare Dev for hurting his son and leaves. Prisha gets worried seeing angry Rudra and says he can do anything in anger now. In the next episode, Dev and Vicky will be seen talking to each other in an empty classroom. Dev will say that now Saaransh will remain away from Aaliya and even Aaliya will learn a lesson. Angry Rudra will grab Dev’s collar and ask him how dare he hurt his son. On Rudra’s orders, the principal will suspend Dev for 15 days. This will shock and anger Dev. Yuvraj will be seen stealing a pair of slippers. After this, someone will run away hitting Yuvraj with his or her bike. Rudra will be fighting with a few people outside his house.

Reviewed Rating for Yeh Hai Chahatein Upcoming track 9th April 2022 Written Update: 4/5 This rating is solely based on the opinion of the writer. You may post your own take on the show in the comment section below.