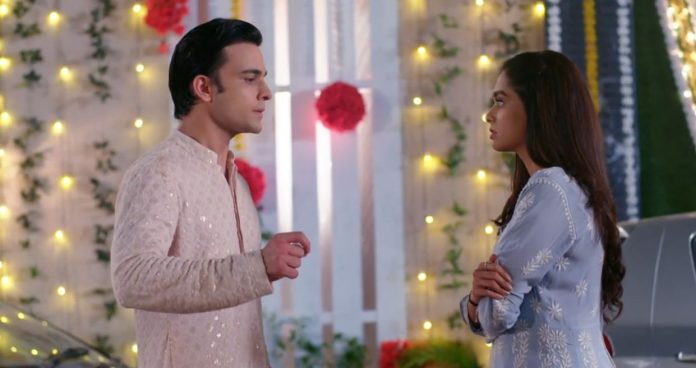 Vikram asks about the keys. Pallavi tells tat she never locks it. He goes to get the keys. She asks Ranbir what is he doing at home. Ranbir angrily asks her why is she always after him. He apologizes and tells her that he wants to nab Nick somehow, Nick is the person who attacked him. He asks her to tell Prachi to not get into his work. Pallavi asks Prachi not to intervene in his work. Prachi tells that Ranbir doesn’t want to go away from him.

Prachi tells that she also wants him to stop finding the attacker, but his desperation is becoming his passion, he is hurting himself. She asks Pallavi to stop Ranbir. She doesn’t want Ranbir to lose his life because of her. Pallavi asks Prachi what magic did he do on Ranbir. She tells that Ranbir has nothing in his life except Prachi. She folds hands to Prachi and requests her to go away from her son. Prachi remembers Ranbir’s request. She asks Pallavi to trust her, she will never take her son away form her. Shahana looks for Prachi.

Elsewhere, Aaliya asks Rhea if she went to sleep during meditation. Rhea tells that she doesn’t want to do meditation, and sleep for years. She doesn’t want to imagine Ranbir and Prachi’s children. Aaliya jokes on her. She asks Rhea to keep her mind calm, and stop panicking. Rhea tells that Nick is locked in the cupboard, they should go and free him, they should pay him and make him leave. Aaliya asks her to come. Rhea takes the money to pay to Nick. Ranbir speaks to the Inspector. He gets upset that police isn’t able to find Nick. Inspector tells that he will try and find the real culprit.

Ranbir gets angered. He tells that his wife is attacked, he feels terrible and scared, his situation is too tensed. He asks Inspector to just catch the culprit. He apologizes to him. Shahana overhears Ranbir’s conversation. Inspector tells that he didn’t feel bad of Ranbir’s words, Ranbir loves his wife and that’s why he is angry. Ranbir asks him to come home and they will make some strategy. Inspector tells that he has to go home and meet his wife. Ranbir asks him to please come. Inspector asks for some time. Shahana tells Ranbir that Prachi is okay. Ranbir tells her that he knows this, did Prachi send her to say this, she shouldn’t stop him from finding the culprit.

Shahana asks him not to hurt himself. He tells that even she should feel hurt that someone tried to kill Prachi, and that person is from his own family. He adds that he is feeling angered on his family member for planning such a crime. He wants to find that family member. He swears that he will not keep any relations and not spare the culprit. He tells that he also suspects her. She asks him if he thinks he can kill Prachi. He tells that he didn’t say that, she is under the suspicion by police, not by him. He asks her to give her mind to Prachi.

She asks him to talk to Prachi. He tells that he doesn’t want to go and fight with Prachi in a bad mood. She tells that once his anger vents out, then he will just have love. He tells that Prachi always does a melodrama, she fights with him all the time. He tries to calm himself down. He tells that he will never spare the culprit who tried to kill Prachi. He asks Shahana to tell this to Prachi. Shahana tells that Aaliya and Rhea are wrong. She wonders how can they think of killing Prachi. She collides with Dida. Nick watches them from the cupboard. Dida asks is Prachi fine. Shahana tells that Prachi is okay, Ranbir and Prachi take care of each other despite their fights.

Shahana looks for her earring that fell around. Aaliya and Rhea don’t see Shahana there. Rhea unlocks the cupboard. Nick sees Shahana. He takes the money bag from Rhea and shuts the door. Rhea asks Shahana why is she still here. Nick gets happy seeing the money. Aaliya asks Dida to come with her and talk. Dida tells that she has knee pain, she can’t get up. Dida asks Aaliya to call the doctor. Rhea and Aaliya go away for some time again. Nick keeps patience and stays locked in the cupboard. Ranbir doesn’t want to take much stress. He vents his anger. He recalls Nick’s words that someone from Kohli family planned that attack. Prachi finds Ranbir hurting himself in rage. She grows worried for him.

Reviewed Rating for Kumkum Bhagya 12th April 2022 Written Update Prachi’s love: 4/5 This rating is solely based on the opinion of the writer. You may post your own take on the show in the comment section below.