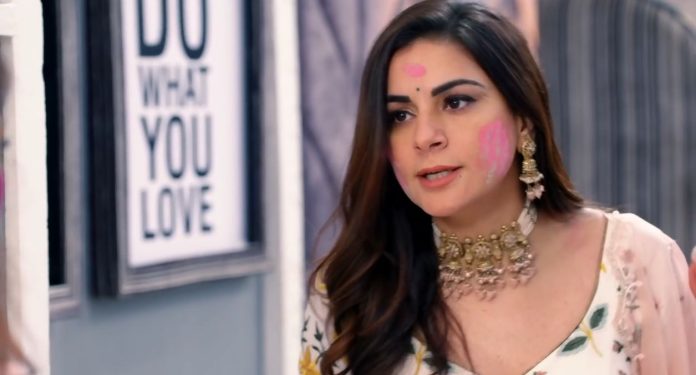 Kundali Bhagya 11th April 2022 Written Update Preeta warns Preeta and Karan spend time in their room. Natasha intervenes them to get Preeta out of the room. Preeta warns Natasha that she will not spare her if the latter dares to try to trap Karan. She asks Natasha to leave. She shuts the door on Natasha’s face. Natasha goes to Sherlyn, who asks her what did she do about their plan. Natasha tells her that Karan isn’t with her, he is with Preeta inside the locked room. Sherlyn is shocked. Prithvi tells that he will have a reentry in the Luthra house and then it will be fun. He hopes to enter the Luthra family with an aim to ruin them down, and expects Preeta’s shocked reactions.

Earlier in the show, Sherlyn asks her to find out Karan. Naagre asks Sherlyn not to fight with Preeta, else she will lose. He praises Preeta. Sherlyn slaps him in anger. Naagre falls down. Pradeep cries that Naagre died. She tells that he didn’t die, he is just unconscious.

Pradeep kicks Naagre and makes him regain conscious. Shrishti finds Janki and Biji drunk. She gets into a tough time handling them. Karan unlocks the door. Preeta cries. He asks why is she crying. She tells that Sherlyn had locked her. He calls Sherlyn mad. She is scared that Sherlyn will lock her again. He tells that Sherlyn can’t lock her, he will shut the door to stop Sherlyn. Karan and Preeta lie on the bed and laugh. They get into a moment when the fate brings them close.

He tells that he was just friendly with her with an intention of making Preeta jealous. She tells that she felt really bad seeing Karan applying the colours to Natasha. She beats him. They have a pillow fight. They enjoy their light moments. Natasha thinks her first night plan will get spoiled, because of Preeta. She looks for Karan. She thinks if she doesn’t find Karan, then what will happen. Karan and Preeta play cricket in the room. He gets hurt. She asks him if she should call a doctor for him. He tells that he isn’t too hurt. Karan and Preeta’s conversation gets heard by Natasha. Natasha knocks the door and asks Karan to listen. Preeta and Karan insult Natasha on her face and laugh. They shut the door and ask her to get away.

Sherlyn looks for Natasha. Biji and Janki call her a criminal. Shrishti asks Sherlyn not to mind, they are just drink. Sherlyn tells that the entire family are of drunkards. Shrishti asks her to mind her tongue. Sherlyn rebukes Janki. Shrishti asks her to talk to the elders well, else she will beat her legs. Sherlyn gets troubled by them. She finds Natasha and asks her why is she wasting her time. Natasha tells that Preeta is wasting her time, she is with Karan in the room. Sherlyn asks her to not leave Preeta with Karan in the same room, else they will come close and spend a night together. She knocks the door. She tries to stop them from coming close. Karan and Preeta open the door.

Natasha pulls Karan. Karan doesn’t listen. He pushes Natasha and shuts the door. On the other hand, Prithvi tells that he will have a re-entry in the house, Sherlyn will welcome him by an aarti, Preeta will bow down to him, they will serve him like the old times. He imagines his good times. He gets the jail food. He refuses to eat it. Karan and Preeta spend some time together in their room. He tells that she always does the mistake and blames her. He then tells her that he finds her really cute when she gets angry on him. She gets shy and happy by his compliment.

Reviewed Rating for Kundali Bhagya 11th April 2022 Written Update Preeta warns: 4/5 This rating is solely based on the opinion of the writer. You may post your own take on the show in the comment section below.