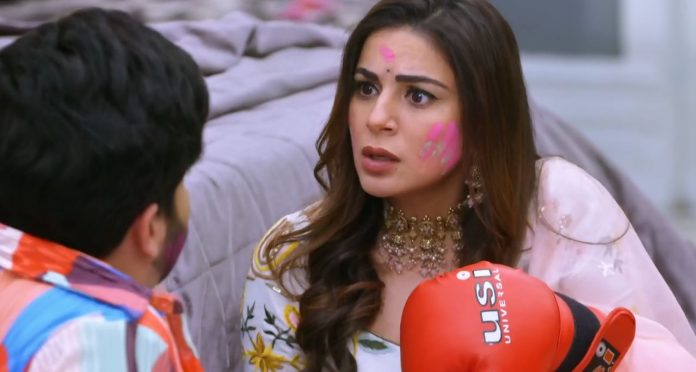 Kundali Bhagya Preeta threatens Karan 12th April 2022 Spoilers Karan and Preeta are in their intoxicated state and go into their room. Preeta wears boxing gloves and warns Karan that if he misbehaves or tries to flirt with Natasha then she will break his face. Karan is taken aback. Karan asks Preeta what if he doesn’t flirt. Preeta replies that if he doesn’t flirt then there will be no problem at all. She assures Karan that she will not break anything. Karan and Preeta smile looking at each other. Will Karan and Preeta fail Natasha and Shirleen’s plan?

Kanta tells Anupama that her happiness is the topmost priority for her now. Anupama becomes emotional. Baapuji gives Kanta the first invitation to MaAn’s wedding. Kanta performs a ritual for Anuj and Anupama. Kanta gives a gift to Anuj but he tells her that he wants only blessings from his mother. He touches her feet and Kanta blesses him. Kanta warns Anupama to not let the Shah family destroy her happiness once again. She alerts Anupama to be prepared for drama at her wedding. Will Anupama take Kanta’s advice seriously? Will Vanraj and Baa’s anger create stumbling blocks in MaAn’s marriage?

Sudha cries and asks Armaan if he trusts his mother. Armaan answers in affirmation. She asks him to marry Palki. Armaan is shocked. On the occasion of Palki’s birthday Sudha announces that Armaan has agreed to get married. Palki is delighted and Anjali cries tears of happiness. Armaan smiles but with tears in his eyes. Diya gets watery-eyed listening to this. Armaan and Diya look at each other with eyes full of tears and anguish in their hearts. Will Diya let Armaan marry Palki or will she confess her feelings for him?

Aryan warns Imlie that whatever is there in this house is his and she cannot snatch away anything from him. Imlie is shocked. He tells her that she can neither take away his victory nor his goal. Aryan is about to tell something but stops and Imlie asks him to complete his sentence. Imlie asks Aryan how will she work because the list containing the names of factory workers was in the laptop and he broke it. She questions him about how will she gain that. Aryan informs Imlie that he has taught her the trick to acquiring information. Aryan leaves Imlie confused. How will Imlie reach her goal? Will Aryan’s teaching help her achieve it?