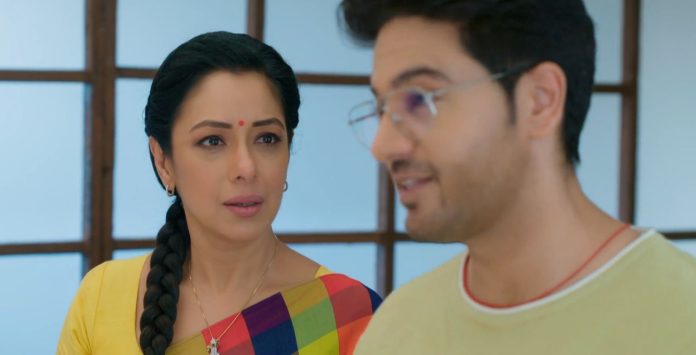 Anupama 12th April 2022 Written Update Anuj’s promise Pakhi recalls Samar’s words asking her to understand that it is Anupama who always stands for them in front of the world and thus they should also stand and fight the world for her. She also recalls Bapuji keeping a diya for Anupama’s marriage in the house temple. Pakhi further recalls Kinjal thanking God for becoming the first guest of Anupama and Anuj’s marriage. She sees diya kept in the temple blowing off, thus she runs and puts oil in it, to keep it lightning. Anupama and Kinjal come and see this from behind.

Kinjal smiles and Anupama grows emotional. Pakhi turns and an emotional Anupama thanks her. Confused Pakhi leaves from there. Kinjal tells Anupama that Pakhi is still a child and will understand the right thing slowly. Anupama says Pakhi thought about her, what else a mother needs. Kinjal tells Anupama that the first step is the toughest and Pakhi has taken it. She tells Anupama, now Pakhi won’t take much time to walk towards her. Kinjal wishes that Paritosh also change his mind like Pakhi and include himself in Anupama’s happiness.

On the other hand, Kavya recalls Rakhi’s words, explaining to her, her 0% importance in Shah house. She also recalls Rakhi’s job and divorce suggestions. Kavya further recalls Rakhi asking her to decide if she wants to become old Anupama or old Kavya. Vanraj enters the room but Kavya ignores him. Anupama reaches her mother’s home, She gets surprised and emotional seeing Anuj sitting with her mother. Anupama’s mother explains that sons-in-law take time to consider their wife’s parents equal to their own parents. She says a daughter will obviously cry in happiness seeing her to-be husband giving so much respect to her parents.

Anupama stutters saying that she never dreamt that her mother will get a loving son-in-law like Anuj. She gets more and more emotional, when Anuj asks her mother to consider him her as her own son. Anuj tells Anupama’s mother that Anupama isn’t perfect as she cries a lot on each and everything. Anupama jokingly says, she didn’t get a perfect groom as she herself isn’t perfect. Anuj tells Anupama’s mother that he will spend half-a-year at her house and will eat rice three times a day. Anupama and her mother ask him why. Anuj jokingly says, he doesn’t want people to say that, this son-in-law is eating chapatis at his mother-in-law’s home.

Anupama’s mother happily accepts the invitation. GK flirtatiously asks Anupama’s mother to not work in marriage, instead reach all decked up. Anupama’s mother gets shy and everyone laughs. Seeing Anupama’s tears flowing down again, Anuj asks her to not start again. Anupama tells Anuj that now her anger will come to the forefront. Anuj gets a little scared like an innocent kid. Both Anuj and Anupama ward off evil eyes from each other and their happiness. Bapuji and GK tells Anupama’s mother that they made Malvika and Samar as official wedding planners as they don’t want Kinjal tio work much in pregnancy. They reveal that they made Kinjal a consultant.

GK says the rest of the work, he and Bapuji (teenagers) will handle. He jokingly says that he will earn marriage luck by working more in this marriage. Everyone laughs. Bapuji asks Anupama’s mother to not work and just enjoy her daughter’s wedding, which she couldn’t last time. Bapuji announces that everyone will have to stay at his house as marriage will happen there ony. Anupama’s mother agrees reluctantly. GK jokes about yummy marriage food. Anupama tells Anuj that it’s every mother’s dream to enjoy her daughter’s wedding, without any tension. Anuj says after all it’s their marriage, new story, new chapter and news rules.

Later, Baa sees Samar with some mattresses and asks him why he brought them here. Samar tells Baa that it’s for Anupama’s marriage guests. Baa tells Samar that Bapuji called all the relatives but everyone refused to come. Samar tells Baa that he knows it. He also tells Baa that Anupama’s mother, brother, Nihar, Devika and Rakhi will come. Baa says these people don’t need to stay at Shah house as they live nearby only. She asks Samar to not expect that she will take care of them and their needs. Samar leaves asking Baa to not worry as they won’t ask/seek any help from her, Vanraj and Kavya.

Anupama recalls Baa’s taunts to her maternal family. Both Anupama and her mother grow very emotional. Anuj tells Anupama that it’s confirmed that Kanta is her mother only. GK asks Anupama’s mother to memorize all the wedding songs as they will rock the floor at wedding music. When Kanta asks about Vanraj and Baa, Bapuji leaves with GK, ignoring this topic. Anuj tells Kanta he got a mother in her form. Kanta blesses Anuj and the latter leaves to drop GK and Bapuji. Anupama tells Kanta that she is very happy. Kanta asks Anupama why she looks scared. Anupama reveals to Kanta about Baa’s curse.

Kanta tells Anupama that the curse can’t work without God’s consent. She explains to Anupama that a person’s beliefs give birth to curse and blessings. Kanta asks Anupama to stop thinking bad as words aren’t bigger than deeds. She tells Anupama that nothing will affect her; she never did anything bad to anyone. Kanta keeps on explaining to Anupama to be happy as she is teaching everyone that love and age have no relation. Anupama hugs her mother tightly.

Reviewed Rating for Anupama 12th April 2022 Written Update Anuj’s promise: 4/5 This rating is solely based on the opinion of the writer. You may post your own take on the show in the comment section below.