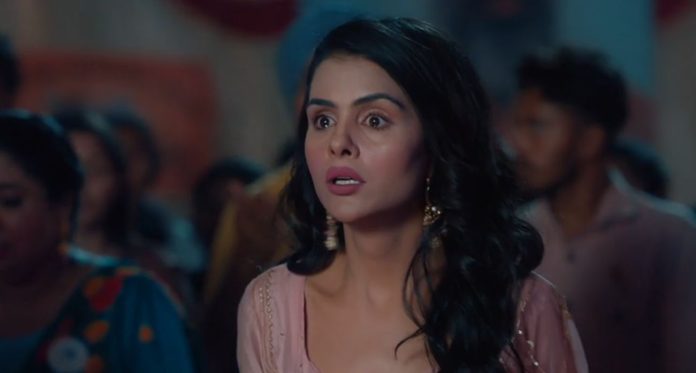 Udaariyaan 12th April 2022 Written Update Shock for Tejo The misunderstandings between Tejo and Fateh doesn’t end because of Angad and Jasmin’s constant interference in their relationship. Both Angad and Jasmin act as well-wishes for Fatejo, and often give the true advice that’s concerning the couple’s union. Despite their advice, their intentions look suspicious. Tejo gets bothered seeing Jasmin with Fateh, unaware that Jasmin is pleading with Fateh just for Tejo’s sake. Jasmin wants Fateh to apologize to Tejo and win her back. She alerts him that Angad will win Tejo by reaping the benefits of their fights. She asks Fateh to patch up with Tejo at the earliest.

Fateh doesn’t take her advice and reacts in anger when he finds Tejo bonding with Khushbeer. He tells Tejo that she isn’t related to Virks now. Tejo gets disheartened. She later loses her purse and goes to take Angad’s help in finding it, because her purse contains her important documents. They go to check the cctv footage at the camp site. They get to see suspicious activity of Jasmin and Fateh. Tejo gets into a confusion while Angad keeps advising her to be positive and not suspect Fateh. He tells that there is more than what meets the eyes. Angad tells her that Fateh and Tejo’s love is strong and she shouldn’t suspect his love.

Tejo heads home and gets pre-occupied with the suspicious thoughts. She thinks if Fateh is cheating on her again by having an affair with Jasmin. Fateh too thinks of Tejo and Angad’s over-friendly bonding. They both think of meeting once and getting an answer. Fateh contacts her to ask for a meeting, to which she readily agrees. She also wants to confront him about Jasmin and get her answers so that her suspicion ends. Tejo goes to meet Fateh, when Angad arrives at her place to meet her. Angad finds her going to meet Tejo and fears that Fateh may hurt her. He follows Tejo out of concern. Fateh dreams of a happy union with Tejo.

He wishes his dream comes true when he meets Tejo and tries to sort out their issues. She questions him about Jasmin and his secret meetings. Fateh gets upset that she is suspecting him and still punishing him for the past. Tejo tells that she isn’t doubting him but wants her answers to clear her mind. She reminds that even he was questioning her character when Angad is just her good friend. Fateh feels sorry. Angad appears there and this angers Fateh. Fateh loses his cool and bashes up Angad, who tries hard to explain that Tejo just loves Fateh. Angad asks him to stop hurting her by his suspicion.

Tejo stops their fight and defends Angad. She asks Fateh not to dare hurt Angad. Fateh stays fuming in rage, while she walks out with Angad. Later, both the families, Virks and Sandhus meet at the election campaign site again to proceed with the next campaign strategy. A fight occurs there suddenly, after Tejo arrives. Fateh loses an important pendrive during the fight. He challenges to defeat the Sandhus by playing mind games. He later finds the pendrive back and plays the video which he made to support Khushbeer’s campaign.

A shocking video of Fateh and Tejo’s holi night romance plays on the screen, ruining Tejo’s dignity, confidence and hopes completely. The video brings disgrace for Tejo and Sandhus, who think that Fateh has intentionally played the private video to defame Tejo and make Khushbeer win the elections. Furthermore, a new chaos arise between Fateh, Tejo and their families. Who is the culprit in their love story? Who has swapped the pendrive and tricked Fateh? Will Tejo break up with Fateh and marry Angad? Keep reading.

Reviewed Rating for Udaariyaan 12th April 2022 Written Update Shock for Tejo: 4/5 This rating is solely based on the opinion of the writer. You may post your own take on the show in the comment section below.