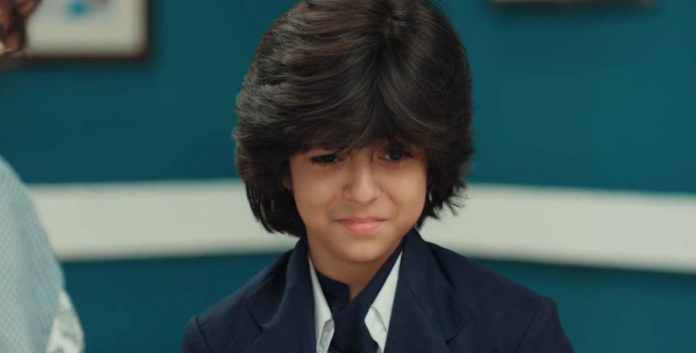 Yeh Hai Chahatein 12th April 2022 Written Update Saaransh arrested Sharda asks who could have dared to do such a cheap thing with Prisha. Prisha says she suspects Dev behind all this. She tells Sharda that after getting suspended/rusticated for his evil tricks in school, Dev is doing all this to take revenge from her. Rudra says he won’t spare Dev, if he is behind all this. Sharda asks how a school student can do this. Prisha says Dev is a 20 year old boy, not a kid. She tells Sharda that Dev has failed twice in 12th standard.

Rudra starts calling police to take law’s help against Dev. Dev returns home. His father asks him why he returned so late. Dev lies to his father that he was practicing for the school’s annual function. Dev’s father believes him and hugs him. He tells Dev that he is proud of him and believes that he will become a successful person like him one day. Aaliya follows Dev to his room and asks him why he didn’t tell the truth to their parents that he got suspended from school. Dev asks Aaliya why she told the truth in school and got him suspended.

He warns and threatens Aaliya to not tell his truth to their mother as she would die crying. Dev tells Aaliya that he will now pretend to go and return from school with her. Revathi is revealed as Dev and AAliya’s mother. She cares for Dev thinking that Dev is a hardworking and good boy. Aaliya feels irritated with Dev’s pretense of being good. Dev lies to Revathi that he went to the temple and brought marigold flowers for her. Revathi says everyone should get a son like Dev.

Revathi leaves asking Dev and Aaliya to come downstairs for dinner. Aaliya asks Dev what kind of son he is who lies to his own mother too. Dev tells Aaliya that a person needs a brain too to lie. He asks Aaliya to stay quiet and mind her own business. At Khurana Mansion, Rudra is seen asking the inspector to help them expose Dev. Inspector tells Dev that they can’t do anything till they don’t have any proof against Dev, but just suspicion. He tells Rudra that they will take the cyber team’s help to get to know who published flyers with Prisha’s photograph on it. Prisha says that they won’t let Dev get alerted about their plan. Inspector agrees with Prisha.

Rudra asks the inspector to collect proof against Dev as soon as possible. Sharda wonders from where evil Dev entered their life and made it hell. Prisha says they won’t tell Saaransh and Ruhi about the flyers incident. Next morning, Prisha, Rudra, Ruhi and Saaransh reach the school. After Ruhi and Saaransh go inside, Prisha explains Rudra to not get affected by all this as police are searching for the culprit. Rudra leaves. Prisha collides with a crying Revathi. She takes Revathi aside and asks her what happened. Revathi tells Prisha that her son disappointed her today. Prisha explains to Revathi that mothers do everything best in their hands for their children but rest depends on children’s personality too.

She keeps on explaining to Revathi that they can’t write their children’s fate but fulfill their responsibilities. Prisha tells Revathi that it’s on children what path they choose and what they become, mothers can’t do everything. She asks Revathi to not blame herself. Revathi agrees with Prisha’s words and tells her that now she is feeling a little better. Prisha tells Revathi that she doesn’t need to thank her as she also helped her many times. She asks Revathi what happened to her son, if she could help her somehow. Before Revathi could tell anything to Prisha, Rudra calls her. Rudra asks Prisha, where she is. Prisha tells Rudra that she is with a tense and worried Revathi.

He also tells Rudra that they brought CCTV footage of the cyber cafe to see who actually got Prisha’s flyers printed. Rudra, Inspector and Prisha start seeing the cyber cafe footage. At school, Aaliya tells Saaransh that she still wants to perform in the annual function with him. She requests Saaransh to say yes and tells him that his wounds will heal by then. At the same time, Dev and his evil friends start speaking ill and vulgar words about Prisha. Saaransh feels angry. Aaliya asks Saaransh to come inside the school. Saaransh tells Aaliya that he wants to see how much Dev and his evil friends can stoop. Dev and his friends keep talking vulgar and ill words about Prisha. Saaransh asks Dev how dare he speak ill and vulgar words about his mother.

Dev shows Prisha’s vulgar flyers, which he got printed and distributed, to Saaransh. Saaransh tells Dev that he must have done this to trap Prisha. Dev speaks ill about Rudra too. Saaransh pushes Dev away and threatens him to dare not speak anything ill or vulgar against his mother. Dev doesn’t stop speaking ill about Prisha. Saaransh starts beating Dev black and blue. As per Dev’s plan, he doesn’t react and his evil friend starts making a video. Aaliya asks Saaransh to stop. Dev keeps talking ill and vulgarly about Prisha to put Saaransh in trouble. Aaliya asks Dev’s evil friends why they are recording Saaransh and Dev’s fight, instead of stopping it.

Flashback shows Dev threatening someone to make his and Saaransh’s fight’s video. Dev starts bleeding, Aaliya asks the security guard to call principal sir. When Saaransh starts walking away, Dev again provokes him by talking vulgarly about Prisha. Saaransh again starts beating Dev. In his thoughts, Dev says he trapped both Saaransh and his parents at the same time. At the police station, Prisha and Rudra get shocked seeing Tarun getting Prisha’s vulgar flyers printed. They tell the inspector about Tarun. Dev recalls promising Tarun that he will call him back to school, if he will get Prisha’s vulgar poster printed for him. He recalls how he fooled and trapped Tarun to save him.

In the next episode, the principal will tell Rudra and Prisha that Saaransh beat Dev balck and blue. He will also tell them that Dev is in the hospital because of Saaransh. Worried Revathi will be seen searching for Dev in school. Rudra and Prisha will get shocked on knowing that Revathi is Dev and Aaliya’s mother. In the hospital, Yuvraj will hit a ward boy, make him unconscious and hide him. Revathi will get Saaransh arrested for attacking Dev. Prisha, Rudra and Saaransh will get worried.