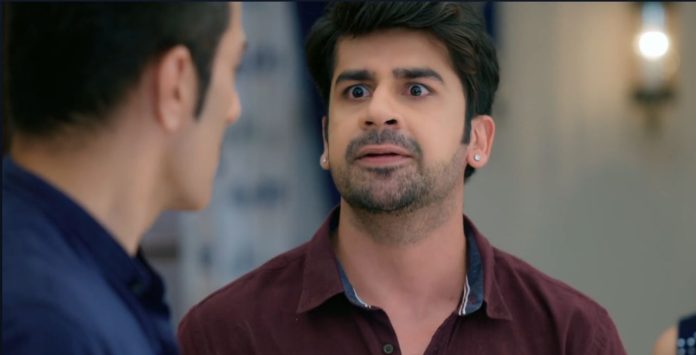 Anupama 13th April 2022 Written Update Paritosh upsets Vanraj Kanta (Anupama’s mother) tells Anupama that she has got the best man in Anuj as she is a good human being. She asks Anupama to fulfill her and Anuj’s dreams now. Kanta advises Anupama to never let Shahs snatch her happiness once again. She alerts Anupama that Baa and her gang will surely try to create problems in her and Anuj’s marriage. Anupama feels worried. After thinking a lot, Paritosh goes to Vanraj and asks him to try to understand him. He tells Vanraj that according to Malvika’s anger, till now, she would have ruined their image in the market, due to which they won’t be able to get any job.

Vanraj tells Paritosh that he knows everything. He says to fulfill dreams, a person needs financial backup too, which they don’t have and no one else will give them. Vanraj cuts Paritosh’s words and requests him to leave him alone for sometime. Paritosh tells Vanraj that he has someone who can help them. When Vanraj asks who, Rakhi Dave smirkingly enters saying, it’s she who can help them. Rakhi says she brought imported fruits for Kinjal. Vanraj tries to ignore Rakhi, but she stops him.

She tells Vanraj that he has only two choices, either he can remorse his defeat or can ask her help. Vanraj tells Rakhi that she doesn’t need to think about Shahs, they will help themselves. At the same time, Anupama and Kinjal arrive there. Rakhi gets angry seeing Kinjal with vegetable polybags. She tells Kinjal that she didn’t give birth to her to buy vegetables or fruits. Kinjal tells Rakhi that a person’s status doesn’t decrease by doing household work. Rakhi gets angry but Kinjal tackles her in a unique way. Rakhi asks Kinjal why she wants to give birth to her child in a house where there is no earning member left.

He tells Vanraj that he should have just worked in the kapadia empire, but he played mind games with Malvika to ruin Anuj. Paritosh accuses Vanraj for ruining everything. He blames Vanraj for all his weaknesses and failures. Paritosh says he was a fool, who wished to become like Vanraj, a loser. Rakhi smirks hearing this, while others get utterly shocked. Baa asks Paritosh if he has any idea who he is talking to. Paritosh says he is talking to a person who achieved nothing in his life, whom a doormat wife like Anupama left, whom a wife like Kavya is showing eyes, who failed to handle his job and business and who failed to earn respect and reputation. Everyone stands shocked, except Rakhi.

He tells Vanraj that he failed to handle money, respect and family and lost everything. Paritosh also tells Vanraj that he even lost a father’s respect today. Anupama asks Paritosh to go to his room as he isn’t in his senses at present. Paritosh says he came to his senses today as he never recognized that not Anupama, but Vanraj has been the biggest loser in Shah house. Kinjal angrily asks Paritiosh to see the biggest loser in the mirror. She asks Paritosh, if he got tired screaming out his anger on others, that now he is screaming out his anger on Vanraj. Kinjal tells Paritosh that though she doesn’t like somethings about Vanraj but he has only done good to him (Paritosh).

Rakhi says Paritosh wouldn’t have been in this condition, if Vanraj would have been good to him. Paritosh agrees to Rakhi. Rakhi asks what will Paritosh do when Vanraj doesn’t have the status to help him. Paritosh asks Vanraj what problem he has, if he is taking Rakhi’s help. Rakhi indirectly says that Vanraj feels jealous seeing Paritosh’s success. Paritosh agrees to Rakhi’s words. He stops Anupama from talking in between. Baa asks Paritosh what he has done in life except begging in front of his mother-in-law for help. She also asks him why people feel jealous of him. Paritosh asks Vanraj to see people taunt him everywhere, because of him.

Vanraj thanks Paritosh for showing him his status and this day. Paritosh thanks Vanraj for showing bad days to his family’s life. He keeps on thanking Vanraj for fighting with Malvika for no reason, fulfilling/keeping enmity with Anuj and Anupama, burning the biggest opportunity of his life because of enmity with Anuj and Anupama, ruining his (Paritosh) whole future and career because of his personal enmity. Everyone stands stunned. Anupama tells Paritosh that he never respected his mother but could have at least kept his father’s respect. She asks Paritosh to complain, but politely. Rakhi says Paritosh can’t talk politely because he is Vanraj’s son.

He further tells Vanraj that if he would have thought about his children’s future, then their condition wouldn’t have been like the present. Rakhi says exactly. Anupama tells Paritosh that even if Vanraj did wrong to others but has always done good to him. Rakhi asks Anupama if she is still taking Vanreaj’s side. Anupama says she is just telling the truth, not siding with anyone. She says whatever Vanraj did or is doing is wrong but Paritosh is doing worse. Anupama says that if Vanraj has fulfilled any relationship honestly and with full devotion in his life, then it’s only his and Paritosh’s relationship. She says the same relation is giving Vanraj a back and rude reply. Rakhi says it’s karma. Anupama says this is called insolence.

Paritosh asks Anupama to keep her lectures to herself as his both parents have made his life difficult. Anupama asks Paritosh if he has given any happiness to his parents. Paritosh asks Anupama why he would give any happiness to his parents, when they haven’t given anything to him till now. Anupama asks Paritosh if he will teach them parenting, who himself doesn’t want his own child to come into the world. Paritosh says he doesn’t want to waste time on all this nonsense. He folds his hands and requests a job from Rakhi. Baa asks Paritosh to rub his nose in front of Rakhi and get his own family humiliated. Paritosh tells Baa that he will do it also, if required. This shocks everyone.

Rakhi tells Paritosh that she will think about it. She humiliates Shahs and leaves. Paritosh, Baa and Kinjal leaves. Anupama asks Vanraj to strictly make Paritosh understand his mistakes. She tells Vanraj that he has always shown love to Paritosh but a person or child needs to face their parents’ strictness as well. Anupama tells Vanraj that she agrees to Rakhi’s words that Karma (deeds) return. She explains that she isn’t taunting but instead explaining to him to close his bad deeds account if possible, otherwise today’s episode will continue repeating. Anupama gives water to Vanraj telling that rest is his choice.

In the next episode, Anupama’s supporters will be seen celebrating something at Shah house. Vanraj and his gang will seem irritated. Anuj will arrive and collide with Vanraj. Both of them will fall down, angering Vanraj. Anuj will announce that Anupama’s dance academy has got a 1-year contract. This will shock and anger Baa, Vanraj and Kavya. All supporters of Anupama, including her, will be seen happy.

Reviewed Rating for Anupama 13th April 2022 Written Update Paritosh upsets Vanraj: 4/5 This rating is solely based on the opinion of the writer. You may post your own take on the show in the comment section below.