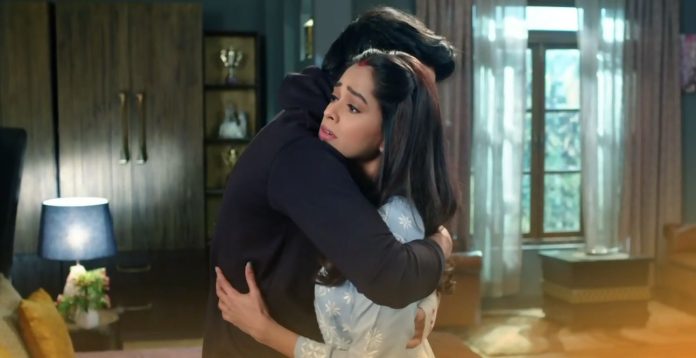 Kumkum Bhagya 14th April 2022 Written Update Prachi stirred Nick and Shahana are rendered unconscious by Rhea and Aaliya. Ranbir tells Prachi that the person who wants to get her killed is someone from the family, that person is staying in their house. Rhea grows worried. Ranbir tells that he won’t let Nick leave until he finds out the truth of that person. Aaliya tells Rhea that they have to take Nick out of the house somehow and save him from Ranbir.

She knows that Rhea and she can get saved only if they save Nick. Ranbir goes to Prachi’s room. He hugs her emotionally. Prachi reciprocates his love after a very long time. She had suppressed her feelings till now and acted as a stone-hearted person in front of Ranbir. Ranbir’s true emotions cause a stir in Prachi’s highly sensitive heart, which starts beating for him once again. Will Prachi reveal her pregnancy news to Ranbir and make their relation strong? Keep reading.

Earlier in the show, Dida thinks that they both don’t want anyone to know that Shahana is pregnant. Aaliya tells Rhea that they have managed the matter well. Rhea tells that Nick will get conscious and angrily blast the truth against them. Aaliya doesn’t think he will go against them. Rhea asks her not to have overconfidence. Aaliya tells that Nick is unconscious now, she got him caught, she will explain him everything when he gets conscious. Rhea thinks they are finished, they have no way to save themselves. Aaliya tells that she will get Nick out of the house. She asks Rhea not to worry about Shahana. Pallavi hears the last line of their conversation and questions them.

Pallavi asks Aaliya and Rhea to tell her if there is anything at all. Rhea tells that they feel Shahana is acting to faint down. Pallavi asks why would she do this. Aaliya tells that she wanted their focus to shift from Nick. Pallavi asks why would she want this. Rhea tells that maybe Prachi did this to get closer to Ranbir, maybe Nick didn’t come to attack her. Pallavi can’t believe this. Aaliya tells that they shall go to Nick and ask him the truth. They go to see Nick. Ranbir and Vikram tie up Nick. Ranbir tells that he has called the police, but he doesn’t want the police to come, because Nick was hired by one of the family member, they have to find out the truth.

Prachi asks him to let the police come and take a call, its not safe to keep Nick at home. Ranbir tells that the culprit is inside the house, he can’t trust anyone in his house, he won’t let Nick go until he tells the truth. He asks Prachi why is she going against him all the time. Prachi tells that Nick is a professional killer, she can’t let him take a big risk. He tells that its risky for the one who hired Nick, if Nick goes away, then they can never know the name of the culprit.

Ranbir asks Prachi if he can sleep in her room. He asks her to relax, he can’t sleep there, he has much work outside. He tells hat he will make the bedding ready for her. He hugs her emotionally. He was afraid that he would lose her. He asks her not to misunderstand that he hugged her. She tells that she understands his feelings. She asks him not to think anything wrong. They have an eyelock. Aaliya adds the sleeping pill in the glass. Vikram drinks the water. Rhea asks him to relax, she is also there to keep an eye on Nick. Vikram feels sleepy. He goes to sleep.

Rhea and Aaliya try to bring Nick to consciousness. Rhea tries to open the ropes. Ranbir sees this and stops Rhea. He asks her why is she opening the ropes. Prachi grows worried for Ranbir. She hears him shouting and goes to see him. Ranbir tells that Rhea has hired Nick for killing Prachi. Rhea gets into a fix. Ranbir tells that Rhea has the motive to get Prachi killed. Rhea tells him that she was tying the ropes tightly. She lectures him. She asks him if he will doubt anyone, is he the only one who wants to save Prachi. She tells that she can blame him too.

She tells that Prachi and she dislike each other, she vents anger on Prachi, but she was foolish to hurt her, she wanted to win over the competition, but its all in the past. She reminds Ranbir that he was just a flirt, how will he feel if she judges him about his Casanova image. She lectures him. She tells that she is equally angry on Nick, she can’t let anyone harm Prachi, she can’t imagine of killing her sister. She lies that Prachi is her own blood. Ranbir feels guilty of suspecting Rhea. Rhea justifies herself. She tells that she had supported Prachi when she had to appear united as one family. She proves that she is concerned for Prachi. She sheds crocodile tears.

She asks Ranbir to understand that she can never harm her sister. She ends Ranbir’s suspicion by lying that she was just tying the ropes tightly, she is also worried for Prachi. Aaliya applauds her. Ranbir tells that he can’t apologize, because he reacted on what he had seen. He asks Prachi to go and sleep. Pallavi asks him to focus on Nick. She asks Aaliya to be grateful to Ranbir, that he stopped the police from coming, else she would have got arrested for attacking Nick. Ranbir asks why is Vikram sleeping. Pallavi tells that he is taking sleeping pills. Rhea and Aaliya get worried.

Reviewed Rating for Kumkum Bhagya 14th April 2022 Written Update Prachi stirred: 4/5 This rating is solely based on the opinion of the writer. You may post your own take on the show in the comment section below.