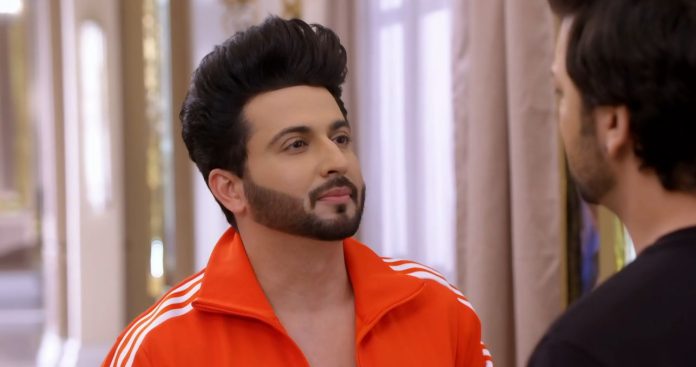 Kundali Bhagya 15th April 2022 Written Update Karan proud Prithvi returns home, but gets ignored by everyone. Kritika is the only Luthra happy to see him. Sherlyn meets Prithvi to discuss their plans. Kritika comes to his room and tells that she has made a cup of black coffee for him. Sherlyn hides from Kritika. She runs behind the curtains and hides, while keeping an eye on Prithvi and Kritika. He angrily throws the cup down and asks Kritika to get lost. He tells her that her family isn’t happy seeing him back, they seem to have accepted Preeta who had got him jailed. The entire family is happy for Karan. Karan taunts Prithvi for coming back home like a shameless man. Prithvi wants to answer him back.

Earlier in the show, Prithvi scolds Naagre for ruining his plan. He leaves from there. Naagre finishes the bail formalities. Karan tells Preeta that he was waiting for her. The entire family comes. Karan tells that he is awaiting a call, and then they can check the news. He gets a call. He asks then to check the news. The family finds Karan back in the news. They like Karan’s BCL auction. Karan tells that his family will be proud of him. Preeta tells that she is also proud of him. He tells that she will get her money and his family will get their happiness. She gets upset hearing him. Prithvi makes an entry home. He is shocked to see Karan’s success news and the family happily celebrating. Prithvi shocks the family with his return. He gets ignored by the joyful family.

Karan is very happy to become successful again. His entire family congratulates him. even Natasha is happy for him. She hugs him and thanks him for bringing so much joy at home. Preeta also congratulates him. He asks her to take a selfie with him, because he will be seen on tv for few days, he won’t be there in her bedroom. She smiles. Sameer asks Karan to dance with them. The family happily dances. Prithvi gets jealous seeing them happy. He goes to his room. He doesn’t want to get angry. He vents anger on Luthras behind their back. He feels insulted because of Luthras.

He tells that he was jailed because of Karan and Preeta, when he has come back on bail then the family has ignored him. He wants to see the same fear in their eyes. Sherlyn comes to meet him. She tells that the family behaved badly with him, but he should forget it. He tells that he can’t forget it. He shouts how dare they ignore him. She asks him to calm down and have water. He sees Kritika at the door. Sherlyn hides behind the curtains. Kritika tells that she has made black coffee for him, she is really happy that he has come back home. He asks her to get lost. He throws the coffee to insult her. Kritika sadly leaves. Sherlyn asks him why did he behave badly with Kritika.

He tells that he got peace by hurting her, because he was hurt by her family. He asks her what happened to her, she always has a problem with him, does she want Kritika to become her friend, she is her Sautan. Sherlyn tells that Kritika isn’t her Sautan. She reveals that Karan and Preeta were together in the bedroom on the holi day. He tells that he doesn’t want any details about them, they are his enemies, they have hurt him a lot, and now he will do something that ruins them badly. He wants to do the unimaginable. She asks him what would he do. He tells that the entire family will shatter by his plans, his plan isn’t ready but very soon he will make a great plan. He drinks in anger.

He comes across Karan. Karan insults him on his face. He tells that he wasn’t expecting Prithvi to come back. He asks Prithvi to have some shame. Prithvi tells that he won’t react in anger as Karan wants. He doesn’t want to harm himself in ego. He tells Karan that he has come back for Kritika’s sake. Karan asks him to know that he got 15 crores in the auction, his class has reached to the next level. Prithvi tells that Karan can’t think where his class will reach. He contacts his goon and sends Karan’s picture to him. He asks the goon to make Karan famous.

Rakhi tells Karan that its his hardwork that he has earned a big success. She asks him to always take blessings from God. She tells that she is really happy for him. She feels proud of him. Karan thanks him. She misses Rishabh. She tells that Rishabh would have gone mad in happiness if he was here. Karan hugs her. Prithvi thinks he has tackled Rishabh before and then Mahesh, now he will tackle Karan. He sees Sherlyn and asks her to go away from him, else anyone can see them together. He starts his plan execution. He asks Sherlyn to just go away, he won’t reveal the plan so soon.

He wants his revenge on Karan and also ruin his career. Sherlyn wants to know what is he thinking. He asks her to go to the family. He doesn’t want to divulge any details. Sameer gives Karan his watch. Karan asks when will Rishabh come. Sameer tells that Rishabh will come when Karan hits a century. Preeta feeds the curd and sugar to wish Karan all the best. She tells Karan that she is really happy for his selection, she wants him to practice well. Natasha asks Karan to drop her. Sameer tells that he will drop Natasha. Preeta finds Prithvi around. She thinks what is he planning to do. Prithvi gets desperately looking for something. Sherlyn asks him where is he going.

Reviewed Rating for Kundali Bhagya 15th April 2022 Written Update Karan proud: 4/5 This rating is solely based on the opinion of the writer. You may post your own take on the show in the comment section below.