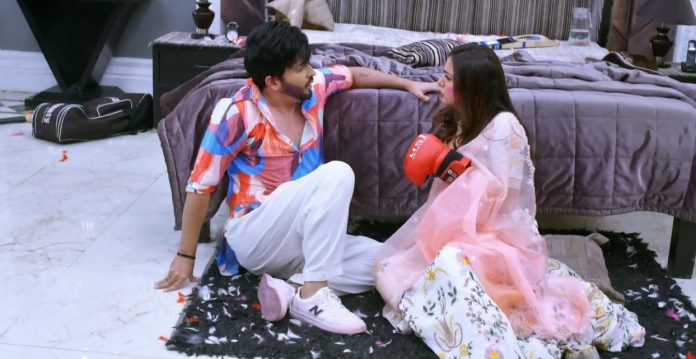 Kundali Bhagya Karan Preeta romance 14th April 2022 Spoilers Karan places Preeta’s bindi in the center and says it was misplaced. Preeta feels shy. Due to the romantic vibes, they both bump into each other. Preeta falls in Karan’s arms and he holds her firmly. Shirleen promises Natasha that she will separate Karan and Preeta at any cost but is waiting for the right time. Preeta thanks Karan for saving her and he replies that he will always be there for her as promised. Preeta looks through a mirror at Karan and blushes.

Anuj comes running excitedly and dashes Vanraj. They both fall down. Anupama is scared. Vanraj looks at Anuj angrily. Anuj tells Bapuji that there is one breaking news. Anupama asks him what is it. He says that Anupama’s dance academy has bagged a contract for a year. Vanraj, Kavya, and Baa fume in anger. Anupama feels overwhelmed.

Omkar drags Shivani’s hands and she asks him to leave her. Rajiv also holds Shivani’s hands but lets go of her hand seeing her in pain. Shivani tells Rajiv that she had told him to not come in front of her family as they will not understand their love. Rajiv decides to follow but Samrat stops him from doing so. Rajiv warns that he will not leave this place until they agree to his and Shivani’s marriage. Omkar throws a stone in Rajiv’s direction. Shivani shouts in fear.

Mrs. Meet asks for help from Latika. She says that the guy’s proposal for marriage has come for her sister-in-law who teased and tried to kidnap her yesterday. Mrs. Meet informs Latika that it is a question of her sister-in-law’s whole life. She requests her to come to her house and inform her family members as to what did the guy do to her. Latika says that she will be humiliated as she had promised to provide safety to her and her family. Latika refuses to speak against Shanty. Mrs. Meet is in a fix.