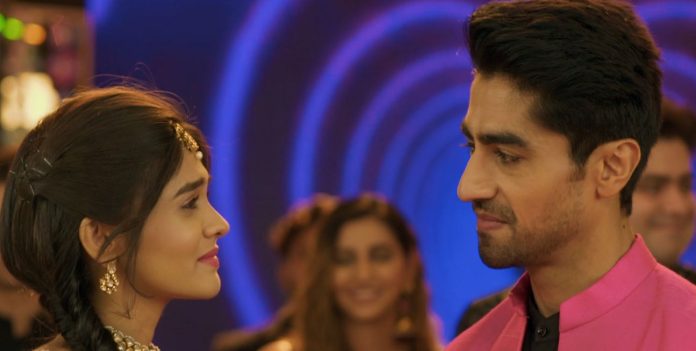 Yeh Rishta 15th April 2022 Written Update Twist in Sangeet Except Harsh, everyone gets surprised by seeing Kumar Sanu in front of them. Abhimanyu apologizes to Kumar Sanu for singing so badly in front of him. He requests Kumar Sanu to sing his Akshu’s favorite song for her. Kumar Sanu says of course and sings, “Tujhe Dekha Toh Yeh Jaana Sanam”. Abhimanyu starts dancing with Akshara. In a lower voice, Akshara asks Abhimanyu how he brought Kumar Sanu to their Sangeet. Abhimanyu asks Akshara if it’s possible that he won’t fulfill his Akshu’s wish.

Harsh on call asks someone how Kumar Sanu reached his house, when he had to be available at City Hall. The person on the other side of the call tells Harsh that Abhimanyu told that Kumar Sanu’s real fan is in his house, his daughter-in-law (Akshara). Harsh gets shocked. Everyone claps for Kumar Sanu and Abhimanyu-Akshara. Abhimanyu-Akshara makes Kumar Sanu join them in dance. Swarna happily tells Suhasini that their Abhimanyu leaves no chance to keep their Akshara happy. Suhasini agrees to Swarna’s words and wards off bad/evil sight/eye from Abhimanyu-Akshara.

Akshara overhears Harsh and Abhimanyu’s conversation and gets shocked. Harsh asks Abhimanyu if he won’t ever use his brain and do whatever Akshara says. Abhimanyu tells Harsh that Akshara never knew about his surprise (Kumar Sanu) for her. Harsh angrily asks Abhimanyu if it was a surprise just like the music therapy department. Abhimanyu says yes. He asks Harsh if he thinks Kumar Sanu is so unprofessional that he will come with him forgetting all his professional commitments. Abhimanyu says there would be some big reason why Kumar Sanu happily came with him to the sangeet ceremony. He tells Harsh that he always thinks the opposite and asks him to try thinking straight once.

At the same time, Harsh receives a call from the minister’s PA. PA tells Harsh that he already informed his manager that the minister won’t be able to attend his organized function as he went to meet the PM for some reason. Harsh gets shocked and disconnects the call thanking the minister’s PA. Abhimanyu asks Harsh if he got to know the truth. He explains to Harsh that a real professional person is one who values every type of profession and professionals. Abhimanyu says he just saved Kumar Sanu’s precious time. He tells Harsh that he just requested Kumar Sanu to attend his and Akshara’s sangeet, but he came on his own will and seems very happy.

Abhimanyu takes Akshara away with him. He explains Akshara to not blame herself as they aren’t at fault anywhere. Akshara explains to Abhimanyu that a person needs to be careful with his/her relations as one mistake can disturb the balance between love and family. She says the person doesn’t realize this disturbance and crosses the line. Abhimanyu tells Akshara that he didn’t cross any line. Mahima overhears this conversation and decides to make her letter against Aarohi-Akshara reach Abhimanyu’s private investigator. Before she could call a waiter to proceed with her evil trick, Shefali interrupts her. She tells Mahima that Goenkas are calling her for some rituals.

Mahima asks why Goenkas rituals don’t get fulfilled ever. Shefali tells Mahima that they enjoy those rituals only and leaves. Mahima thinks she will enjoy, when her trap letter will reach Abhimanyu’s private investigator. Suhasini requests and convinces Kumar Sanu to take part in Akshara and Abhimanyu’s wedding ritual. Mahima and Anand ask Suhasini to perform the ritual later on/some other day and not disturb Kumar Sanu. This makes Goenkas and good Birlas feel bad/upset. Kumar Sanu says rituals are as important as singing, dancing and other things. Kairav and Vansh jokes about all doctors (present in the function) disappointment.

Neil and Parth request Suhasini to make them also aware about rituals performed in sangeet ceremony. Mahima humiliates Parth. Anand asks her to be quiet. Neil tells Akshara that she will have to perform all the rituals performed by Goenkas in other marriages of Birlas too. Reem jokes making everyone smile. Kumar leaves to receive some important call. Aarohi wonders if Abhimanyu really forgave her. Mahima wonders why Abhimanyu’s private investigator didn’t arrive at the sangeet ceremony till now. Abhimanyu and Akshara start performing the ritual as instructed by Suhasini. Suahsini explains the importance of all the rituals of marriage.

Everyone gets worried as this opposite collision signifies trouble in marriage. Harsh says he already told that Akshara and Abhimanyu’s marriage will have problems. Anand tells Goenkas that according to their ritual, Akshara and Abhimanyu will face some big problem. Mahima says she never believed in these rituals but today felt that these rituals also project truth/reality. Everyone gets worried for Abhimanyu and Akshara. Abhimanyu gets angry. Suhasini and Manjiri tries to calm Abhimanyu by telling him that a person needs to make his/her relationship perfect as no relationship is perfect from the beginning. They tell Abhimanyu that now they got to know how he and Akshara will have to work on their relationship.

Harsh says in Abhimanyu’s profession, he can’t keep trying surgery or operation on the patient. Manish asks Suahsini to explain Birlas in their own language. Suhasini explains that illness/disease sometimes can’t be traced in one test and thus people get themselves tested 3-4 times, so that the disease can be eradicated from the root. Akhilesh says the situation should be controlled before a big gets arised the next day. Manish tells Abhimanyu-Akshara that this is why this result came in this ritual. He explains to the couple that they will need to work a little on their relationship. Everyone else also explains Abhimanyu-Akshara the same thing.

Abhimanyu and Akshara hold each other’s hands tightly to give each other a hope to keep their relationship surviving. In the next episode, Kumar Sanu will be seen singing “Aankh Marey”. Akshara and Abhimanyu will be seen dancing in modern clothes with their family members and siblings. Akshara will throw pebbles under Parth, Abhimanyu and Neil. Neil, Parth and Abhimanyu will wobble. Kairav will scream that Goenkas won. Harsh will ask Abhimanyu to keep chanting Akshara’s name and see that she defeated him by cheating. Abhimanyu, Neil and Parth will stare at Akshara with shock. Akshara will seem apologetic and worried.

Reviewed Rating for Yeh Rishta 15th April 2022 Written Update Twist in Sangeet: 4/5 This rating is solely based on the opinion of the writer. You may post your own take on the show in the comment section below.