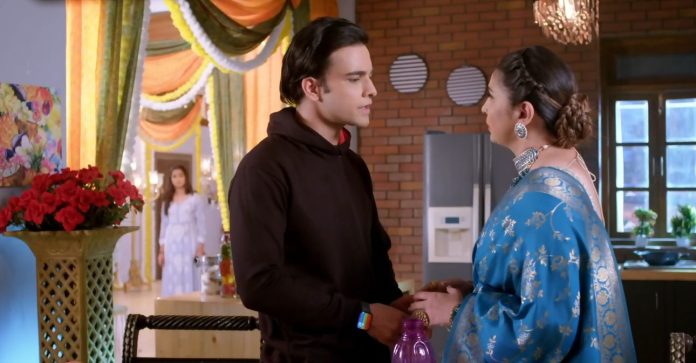 Kumkum Bhagya 18th April 2022 Written Update Confession Pallavi finds Ranbir and Prachi sharing a moment. She confronts Ranbir about his move to hurt his heart once again by expecting to unite with Prachi. She doesn’t want him to chant Prachi’s name. Ranbir comes up with a simple and hearty confession. Ranbir tells Pallavi that he isn’t waiting to get Prachi, he isn’t expecting that he will find her at some point in the journey of his life, Prachi has already separated her paths and relations with him, she has clearly told him that she doesn’t love him. He tells that he doesn’t care that Prachi doesn’t love him, but he wishes that Prachi doesn’t hate him.

He expresses his feelings about his expectations from his life. Pallavi cries for her son’s sorrow. On the other hand, Rhea vents anger on Nick and tells him that she is so troubled just because of him. Vikram wakes up and finds Rhea with Nick. He calls her out and she gets tensed hearing his voice. She doesn’t want to get caught, else it will be her exit from Kohli house. Ranbir finds peace when he is with Prachi. He thinks Prachi is his real peace. Prachi knows Ranbir loves her. She also wants to tell him about her pregnancy and reconcile with him.

Earlier in the show, Aaliya and Rhea take Nick outside the house. Prachi drops a vase down by mistake. Prachi and Ranbir look down and don’t see Rhea and Aaliya taking Nick. Prachi sees the shoe fallen there and tells that its Nick’s shoe. Ranbir tells that Nick is running away. They run to see Nick. Pallavi is hiding there and keeping a watch on Ranbir and Prachi. Aaliya and Rhea take back Nick and tie him up. They also tie up themselves. Ranbir tells that Nick is still here. Rhea and Aaliya fake a drama to show that they aren’t involved. They try to trick Ranbir. Ranbir can’t believe his eyes.

Ranbir tells Rhea and Aaliya that he had seen the same shoe fallen in the lawn. They both start lying to him and ask him is he in sleepy state to say such nonsense. Ranbir tells that he has seen the same shoe outside. Rhea lies that she has tied the rope to her leg for safety, so that if Nick gets up and runs away then she can know it. Ranbir asks about Nick’s shoe. Aaliya tells that the shoe can be of someone else. Rhea asks her not to bother much. Pallavi recalls Ranbir’s words. She hates that Prachi is still with Ranbir. She tells that Prachi is unlucky, she always snatches relations from people.

She is unhappy that Ranbir has come back home because of Rhea. She feels Prachi will ruin Ranbir’s life. She wants Ranbir to understand that Prachi will ruin him. She knows that he loves Prachi, and can’t see his truth, but Prachi doesn’t love him, she just pretends it. She feels that Ranbir will be left shattered. Ranbir overhears Pallavi’s emotional outburst.

Ranbir consoles her. He asks her to beat him or scold him. She reminds his duty that he should also understand his mum. He tells that his heart has so much noise in it that he can’t hear anything else, he has come a long way now and can’t return back, he is madly in love with Prachi. Prachi hears them from far. He tells that he loves Prachi a lot, its enough for both of them, even if Prachi doesn’t love him, he madly loves Prachi, even one-sided love is love, not every love can get its destination. Pallavi cries for Ranbir. She worries that her son is going too far in his blind love.

Ranbir tells Pallavi that he has no expectations of getting Prachi, who has cleared that she doesn’t love him, but he expects that she doesn’t hate him, else her image in his heart will fade down. He doesn’t want her image to fade down. He tells that he has fallen in love with her at first sight, he can pass his entire life with Prachi and his good memories. He justifies that his life will get better if Prachi is around him. He assures that he will never leave his family, because Prachi wants this, Prachi refused to go away with him, she wants him to stay with his family. He feels angered that Prachi is so good.

He wants to hate her, but he can’t even get annoyed with her. He admits that he cares for Prachi a lot. Pallavi asks him why does he love Prachi so much. He tells that he doesn’t know the reason himself, but he will tell her when he knows it. She asks him what did he decide, when Prachi doesn’t want to live with him. She wants to know where is the relation heading. He tells that he doesn’t know it, maybe they will pass their lives this way. She tells that she doesn’t like Prachi. He reminds that Pallavi disliked him and stayed away from him for two years. She tells that she didn’t hate him, she was angry on him.

Ranbir tells that he will believe whatever she tells him. He feels glad to talk to her. She tells that even she liked to know the truth. Prachi hides from them. Aaliya and Rhea try to take Nick away. They think of the other ways that they can take Nick out of the house. Aaliya goes to switch off the lights. Rhea angrily slaps Nick. She tells him that she is in trouble because of him. Vikram wakes up and asks Rhea why is she beating an unconscious man. Pallavi tells Ranbir that his life won’t be easy, Rhea loves him a lot, but he loves someone who doesn’t love her.

She apologizes that she had seen him with Prachi, but he was still appearing alone. He tells that he wasn’t alone, Prachi was with him. She tells that Ranbir went to Prachi for his love, but Prachi stays with him for her own needs, she feels safe to be with him, she feels protected, not good. She asks him not to become foolish in love and ruin his life. She tells that Prachi is ruining his life and even he is ruining his life himself. Prachi walks away at this point. Pallavi tells that if Vikram had asked her to go away with him forever, then she would have gone with him, she knows he is the one for her.

She asks Ranbir if he can say this with confidence about Prachi. She tells that Rhea loves him a lot, she can do anything for his love, she can leave the family and house, and go with him. Dida asks Pallavi what wrong things is she teaching Ranbir. She tells that if Prachi went with Ranbir, then the family would have got broken. She asks Pallavi not to blame Prachi always. She tells that Prachi is trying to unite the family. She scolds Pallavi for never listening to her. Pallavi tells that she will never listen to her if she supports Prachi. Dida likes Prachi a lot. She knows Ranbir loves Prachi a lot.

Ranbir tells that he is getting much angry on the person who has attacked Prachi. He wants to find the culprit. Prachi gets moved by Pallavi’s words. She recalls the times she has hurt Ranbir’s heart. She also feels that she has misused Ranbir’s feelings. She realizes that Ranbir is really a good person. Aaliya goes to tackle Nick’s problem. Preeti calls up Nick. Vikram looks for Nick’s phone. Rhea gets worried. She thinks to inform Aaliya. She doesn’t know whose call is it. Vikram checks Preeti’s call. Rhea tells him that Nick is getting conscious. She takes the phone from Vikram.

She answers Preeti’s call and tells her that Nick will be fine and come home in the morning. Preeti worries for Nick that Rhea will not spare him. Aaliya goes to switch off the power. Shahana confronts her and asks her what is she doing. She tells that she has overheard Rhea and Aaliya’s plans of getting Prachi killed. Aaliya starts denying the blames. Shahana tells that she will call Prachi. Aaliya switches off the lights. Vikram goes to check. Shahana quickly locks Aaliya in the power room. Shahana calls Prachi to tell her the truth. Prachi looks for Shahana.

Shahana tells Aaliya that she will go and expose her truth to the family. Rhea waits for Aaliya. She calls Aaliya, who tells her that Shahana got conscious and threatened of exposing her. she asks Rhea to execute their plan and take Nick out of the house. Nick gets conscious and sees Rhea, who signs him to not open his mouth. Rhea misleads Vikram and asks him to just go and check Nick’s partner in crime. She quickly cuts the ropes and asks Nick to leave from the house. She acts hurt after making Nick escape. Vikram sees Nick running and alerts Ranbir about it.

Reviewed Rating for Kumkum Bhagya 18th April 2022 Written Update Confession: 4/5 This rating is solely based on the opinion of the writer. You may post your own take on the show in the comment section below.