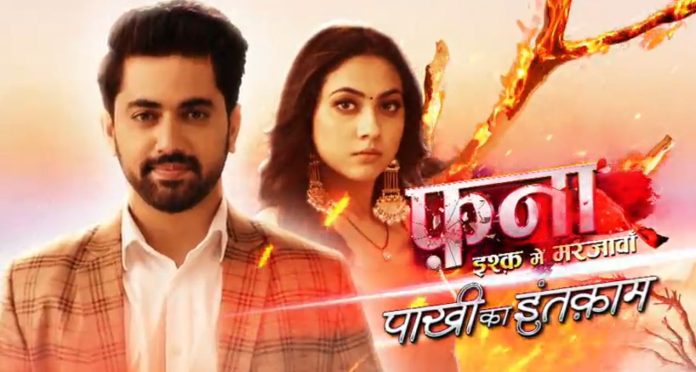 He reveals to Pakhi that 5 years ago, he wanted to tell her all this, but never thought that he would be telling her all this in this situation. Agastya also reveals to Pakhi that only Neelima and he knew about his obsession for her. At Raichand house, Mona gets angry when someone calling on landline doesn’t speak after calling. She scolds that person and disconnects the call. Landline rings again. Angry Mona aska Neelima to pick up the call as it may be Agastya and he will tell his secret only to her, as usual. Sacred Neelima picks up the call and gets shocked after hearing the other person on call.

It seems to be Agastya’s step mother’s call. Neelima gets very scared and runs away with the phone. Mona tries to ask Neelima what happened, but she leaves away scared. She feels worried, thinking what made Neelima so scared. On the other hand, Agastya tells Pakhi that her presence in his life is her favor to him. Pakhi tells Agastya that he still remembers everything but she doesn’t remember anything. Agastya tells Pakhi that he remembers their childhood, whenever something wrong happens to him. He also tells Pakhi that he will die if he won’t get her and hugs her.

On the other hand, Ishaan asks Sameer to not worry, Agastya won’t be able to run away anymore from them. He shows Yug’s photograph to Sameer and tells him that he clicked it outside the police station. Ishaan tells Sameer that Yug is keeping a watch on them on Agastya’s orders. He tells Sameer that once Yug gets caught, they will soon be able to find Agastya and Pakhi. Sameer asks Ishaan why he didn’t tell him this thing at the police station only. Ishaan tells Sameer that if they would have caught Yug at that time, Agastya would have got alerted and ran away somewhere else with Pakhi.

He says Pakhi isn’t safe with Agastya and they need to bring her back home, safe and sound. Ishaan tells Sameer that he has sent Yug’s photograph to inspector Ranjit Singh. He says only Yug can help them reach Agastya and Pakhi. At night, in Jhajjar Haryana, Pakhi hears Agastya coming to her room, she turns her side and pretends to be asleep. Agastya comes closer and thinks that he can’t keep Pakhi like this anymore. He starts to open her foot shackle but stops recalling Pakhi telling him that it was actually she who planned to expose him with Ishaan and Virat’s help. Agastya also recalls Pakhi slapping him and telling that she hates him.

Agastya thinks he can’t trust Pakhi anymore, otherwise she will run away, leaving him. He locks the door and leaves. Pakhi wakes up and coughs. She falls due to the shackle. Pakhi feels helpless thinking that she won’t ever be able to escape Agastya’s captivity. She recalls her father teaching her that solutions to our problems are always around us, nearby but we easily accept our defeat. Pakhi also recalls her father teaching her that a person should never accept defeat. She gets the strength and reaches the water bottle and drinks water from it. Pakhi thinks she can’t accept defeat now after how hard she struggled to expose Agastya.

She promises herself that she will anyhow escape Agastya’s captivity and not let him win. At Raichand house, Neelima gets scared seeing a woman in saree wearing a ring like Agastya’s step-mother. The woman is about to attack Neelima but at the same time, she wakes up. All this turns out to be Neelima’s nightmare. She wonders what type of dream this was. Suddenly, she sees a female shadow outside her room and screams asking who is it. Scared, Neelima runs out of her room. Navel and Mona runs to her and asks her what happened. Neelima says someone was outside her room. Naveli tells Neelima that no one was there as police is just outside their house.

They try to calm Neelima and takes her back to her room for rest. Next morning, in a hospital ward, Ranjit, Ishaan and Sameer are seen. Ranjit covers his face with mask and is seen wearing a doctor’s coat. Ishaan tells Ranjit that they need to be very careful as Yug is a very clever and dangerous man and their one mistake, can make him suspicious. Ranjit tells Ishaan that he very well knows that Yug and Agastya are very big criminals. He asks Ishaan to trust him and his plan. Ranjit reveals his plan to Ishaan and Sameer. He tells them that his two officers are waiting for Yug outside the ward in civilian clothes. They hope that somehow, Yug gets trapped in their plan.

On the other hand, Pakhi gets angry when Agastya tells Pakhi that if she wants to bath, Daayi will be with her and near her. She reminds Agastya that she hasn’t taken bath since 2 days and asks how much, will he control her life like this. Pakhj questions Agastya’s controlling love for her. Agastya acuses Pakhi for her condition and his deeds. He asks Pakhi, if he would have done all this, if she would have accepted his love directly/simply. Agastya tells Pakhi that he wouldn’t have done all this, if she would hace accepted his love simply. He asks Pakhi, how she can think that he can trust her after what she did to him and warehouse (Pakhi, Ishaan and Virat’s secret place where they expose Agastya).

Pakhi asks Agastya where she will runaway from this place, as she doesn’t even know where she is. She says she is just wishing to take bath alone and change into clean clothes. Pakhi asks Agastya, can’t he do this much for her. Pakhi feels bad for crying crocodile tears, thinking she never lied in her life, but had to fake tears being helpless. She thinks no one will be coming to save her from Agastya, thus she needs to do drama to escape Agastya. Agastya feels confused and helpless. At hospital, Ishaan angrily says that even after their hard struggle for Agastya’s confession, Agastya is roaming free. Ranjit tells Ishaan that he should be happy that atleast organ trafficking case on him has been taken back from him after Agastya’s confession.

He says now case will run on Agastya, once Yug gets caught. At the same time, Yug enters the hospital, to keep a watch on Ishaan. Ranjit’s officer secretly informs him about Yug’s arrival. Ranjit informs Ishaan and Sameer about the same. Yug feels suspicious but still checks on Ishaan. He sits on the bench outside. On the other hand, Pakhi tries to make Agastya emotional by her drama. Seeing Pakhi, crying, Agastya agrees to Pakhi’s demand and goes to buy fresh clothes for her. Yug’s stuff falls down. While picking up his stuff, he sees a gun in undercover officer’s back pocket. He gets suspicious of the officers.

Ishaan and Ranjit also comes out. Yug runs throwing something on Ishaan and Ranjit. Ranjit, both of his officers and Ishaan runs behind Yug. On the other hand, Agastya asks Daayi Maa to take care of Pakhi, till he returns. He gives her Pakhi’s room’s lock’s key to Daayi Maa and asks her to keep it safe without forgetting it’s location. Pakhi overhears all this and gets to know that Daayi Maa has the illness to forget things. On the other hand, Ranjit and his officers runs behind Yug and surrounds him from all the directions. Yug pulls out an open wire from nearby on the ground. Ishaan also reaches there. Ishaan and Ranjit notices Yug throwing water on open wires.

Ranjit alerts his officers to not step ahead but fails to stop them. Ranjit’s officers falls unconscious, getting electrocuted. Yug uses the opportunity and runs away. Ranjit tries following him, but he vanishes suddenly. This angers and disappoints Ranjit and Ishaan. On the other hand, Agastya visits a market to but fresh and clean for Pakhi. He witnesses a romantic couple and imagines being romantic with Pakhi in the middle of market. Fanaa-Ishq Mein Marjawan title song plays in the background. With a car’s horn, Agastya’s dream/imagination breaks. He says he is feeling happy on only imagining all this and wonders what will happen, when all this will come true.

Agastya feels assured that one day Pakhi will herself tell him that she loves him. Pakhi on the other hand, wonders how to get her shackle key from Daayi and escape the room and house, where Agastya has held him captive. She seraches an escape way out through her room’s all windows and doors and finds a window. Later, Daayi enters Pakhi’s room with a juice glass and tray. She forgets what she was doing. Seeing the juice glass that she brought for Pakhi, she drinks it herself because of her illness to forget things. She sees Pakhi and realizes her mistake.

Daayi Maayi turns to bring another glass of juice for Pakhi and Pakhi sees her shackle key tied to Daayi Maa’s duppatta. She gets hopeful and excutes her plan to fool Daayi Maa. Daayi Maa gets worried hearing Pakhi’s scream and furniture falling voice. She runs to Pakhi’s room an finds her bleeding and unconscious. Finding Daayi Maa; scared, worried and unattentive, Pakhi hits her head with a show piece. Daayi Maa falls unconscious and Pakhi takes out her foot shackle key from Daayi Maa’s duppatta.

Reviewed Rating for Fanaa 18th April 2022 Written Update Pakhi escapes: 4/5 This rating is solely based on the opinion of the writer. You may post your own take on the show in the comment section below.