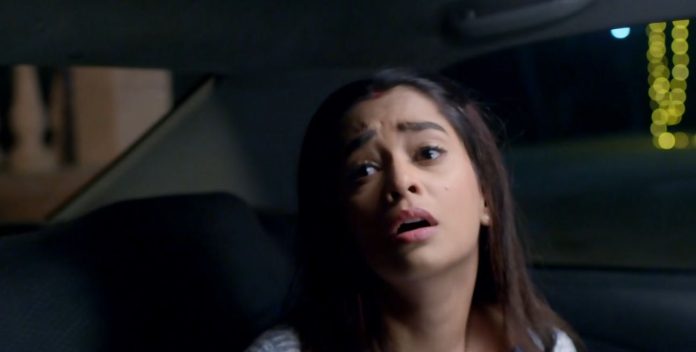 Kumkum Bhagya 19th April 2022 Written Update Prachi to die Ranbir runs after Nick to catch him, but the latter escapes. Prachi gets inside a taxi by mistake. Nick reaches the car and finds Prachi. He thinks it’s a great chance to kidnap her. Nick kidnaps Prachi. He ties her up. Ranbir looks for Prachi in the house. He doesn’t find her. He grows worried by her absence. Nick informs Rhea that Prachi is in his captivity. He tells that he has the clearance to kill Prachi and get rid of her. Rhea asks him to implement their plan. Nick tells that all their problems will get solved if he kills Prachi, its time that Prachi leaves the world and dies. Rhea asks Nick to kill Prachi. Prachi wants to know the culprit who hired Nick to kill her. She asks Nick about his boss, hoping that he will tell her the entire truth before attacking her. Prachi takes a big risk to find her enemy. Will Prachi die? Will Ranbir reach her on time and rescue her? Keep reading.

Earlier in the show, Shahana tells Aaliya that she will go and expose her truth to the family. Rhea waits for Aaliya. She calls Aaliya, who tells her that Shahana got conscious and threatened of exposing her. she asks Rhea to execute their plan and take Nick out of the house. Nick gets conscious and sees Rhea, who signs him to not open his mouth. Rhea misleads Vikram and asks him to just go and check Nick’s partner in crime. She quickly cuts the ropes and asks Nick to leave from the house. She acts hurt after making Nick escape. Vikram sees Nick running and alerts Ranbir about it.

Rhea asks Nick to run away and not stop mid-way. Nick catches Prachi in the darkness and takes her to the car, thinking he has taken Shahana captive. Ranbir asks where did Nick go. Rhea tells that Nick has pushed her and ran away. Vikram tells that Nick has not run outside, but inside the house, maybe he is finding Prachi. Shahana wants to find Prachi. She tells that Aaliya had gone to remove the fuse. Pallavi asks why did Aaliya do this. Rhea tells that Shahana would have said something else, Aaliya might have gone to put back the fuse, why would she switch off the lights when they have to keep an eye on Nick. She thinks how will Nick catch Shahana when she is here.

Pallavi asks Rhea to show her wound. Rhea tells that its an internal wound. She lies that she is feeling nausea. Ranbir shouts to Nick and warns him not to harm Prachi. Nick threatens Prachi that he will stab her stomach and takes her. He makes her sit in the car. He gets to see Prachi’s face in the lights. She asks him to just leave her and let her go. He ties her up. He tells that it’s a big mess now, and nothing can get fixed. He doesn’t want Ranbir to chase him. He asks her why isn’t she stopping Ranbir, why does Ranbir love her so much. Ranbir looks for Prachi.

Aaliya is stuck in the fuse room. Rhea calls Nick to know if he has gone out of the house. She asks why didn’t he take Shahana. He tells her that he left the house but he kidnapped Prachi by mistake. She tells that Ranbir will kill him. She asks him why did he make such a mistake. He tells that it’s a blessing in disguise, he got a chance to remove Prachi from their way and solve all their problems. Rhea likes his idea and asks him to just do it.

He asks her to get the money to him to the location he sends her, else he will go to Ranbir and take Prachi to him, he will have a deal of lakhs and reveal the secrets to Ranbir. He threatens Rhea. He tells that he will be loyal to her for one hour, she can get a lifetime insurance if she gets the money. Rhea goes to free Aaliya from the fuse room. Aaliya gets scared and hides. Rhea calls her out.

She tells Aaliya that they are in a complete mess, Nick has run out of the house, but with Prachi, not Shahana, he is double crossing them and blackmailing them for money. She tells that Nick is threatening of telling the truth to Ranbir. Aaliya asks her to throw the money on Nick’s face and end the matter. She wants to handle Shahana first. Ranbir looks for Prachi. Aaliya puts back the fuse. Shahana gets Prachi’s ring. She realizes that Prachi is in trouble. Ranbir shouts to Prachi. Shahana calls him out. Ranbir hears Shahana’s voice. Ranbir gets to hear a car sound and thinks who is leaving at this time. He runs to see. Nick tries to start the car. Ranbir reaches the backyard. He gets to see Nick kidnapping Prachi and fleeing.

Nick sees Ranbir in front of him. Ranbir rages. He runs after the car. Nick drives away. Ranbir asks him to stop. He tells Prachi that he promised of securing her, he will not fail in protecting her. He falls down on the road and shouts Prachi. Prachi and Ranbir cry for each other. He tells that Nick won’t get saved now, he has done a big mistake by hurting Prachi. He gets mad in anger. He tells that he will not step back and kill Nick if he needs to. Aaliya asks Rhea to take the money to Nick. Rhea tells that she can’t take the money back from the living room, anyone can see her. Aaliya asks her to go out and wait for her, until she brings the bag. She tells that nobody will ask about Rhea, they all are worried for Prachi.

Rhea asks Aaliya will everything get fine this time. Aaliya asks her to be hopeful, Nick will do the work. Shahana tells Dida that she found Prachi’s ring. Pallavi tells that until Prachi is in their house, they can never have peace. She blames Prachi for bringing troubles for them. Dida asks her not to curse Prachi. Pallavi tells that Prachi would have done something wrong that Nick is taking revenge on her. Shahana defends Prachi. She argues with Pallavi. She tells that Pallavi wanted to take revenge on her. Pallavi scolds her. Dida asks Pallavi to get habitual to hear the truth.

Pallavi tells that Dida has encouraged Shahana to misbehave. Shahana apologizes to her. She tells that Prachi is attacked, Pallavi is blaming her, Prachi isn’t so bad, else Ranbir would have not loved her. She asks her to trust Ranbir and his feelings. She worries for Prachi. Vikram knows that Shahana is worried for Prachi and asks her to calm down, instead saying wrong things. He feels police would have arrested Nick, Ranbir did wrong to cancel the police’s arrival. He wants to call the police. Shahana tells that she will go and find Prachi. Vikram calls the police. Aaliya thinks of some way to pick the money bag and pass it to Rhea. Rhea sees Shahana and hides from her. She doesn’t want Shahana to see her.

Aaliya tells that it’s a stressful night. She asks Pallavi to get water for her. Pallavi goes to get water for her. Aaliya coughs and makes an excuse to send Dida away. She takes the money bag to throw it outside for Rhea. Rhea wishes that Aaliya doesn’t send the bag right now. Aaliya throws the bag. Shahana hears the sound. She goes to check. Rhea stops her. She tells that she has come to find Prachi. She starts lying to Shahana. She pretends in front of Shahana to convince her. She fakes her concern for Prachi. She sends Shahana away.

Reviewed Rating for Kumkum Bhagya 19th April 2022 Written Update Prachi to die: 3/5 This rating is solely based on the opinion of the writer. You may post your own take on the show in the comment section below.