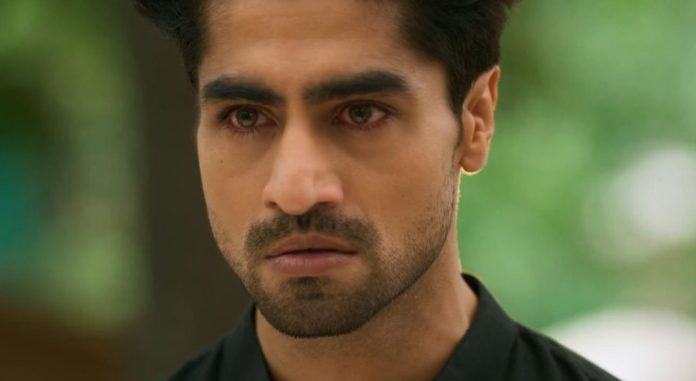 Yeh Rishta Abhi breaks marriage 18th April 2022 Update Abhimanyu and Akshara discuss with each other how much they enjoyed their sangeet ceremony function. Abhimanyu makes Akshara drink water. Akshara tells Abhimanyu that she forgot that she had to ask something from Kumar Sanu. She runs and by mistake water from the bottle falls on the letter typed by Mahima to reveal Manjiri’s accident, truth to Abhimanyu. Abhimanyu picks up the wet letter but Neil interrupts him and takes him somewhere. Mahima wonders where the waiter with her letter and Abhimanyu disappeared suddenly.

Goenkas and Birlas request and convince Kumar Sanu to sing one more song for them before leaving. Private investigator wonders how to disturb Abhimanyu between his family function. Suddenly, he receives an important notification and decides to tell Abhimanyu about it. On the other hand, everyone dances as Kumar Sanu sings, “Saajanji Ghar Aaye” song. Everyone dances happily around Kumar Sanu. Full great Indian vibe can be felt. Kumar Sanu takes a leave. Some signs of Abhimanyu and Akshara’s separation are shown and can be felt too. Abhimanyu goes to drop Kumar Sanu and touches his feet saying thank you.

Phone falls down from shocked Abhimanyu’s hands. Private investigator picks it up and leaves. Abhimanyu watches Manjiri and Akshara happily dancing together. He recalls Akshara telling him that she and Aarohi met with a small accident. Abhimanyu doesn’t want to believe that it was Akshara with Aarohi in that car. He feels angry thinking that Akshara hid the truth from him. He feels suffocated and betrayed, thinking that Akshara hid such a big truth from him. Akshara wonders where Abhimanyu went and why he hasn’t returned till now.

Neil gives Mango Slush to Akshara. Akshata drinks a little and asks Neil about Abhimanyu’s whereabouts. On the other hand, Abhimanyu runs and falls on the road, feeling deceived by Akshara. He keeps running fast on the road, thinking who was driving Aarohi’s car when it hit Manjiri, Akshara or Aarohi. He recalls his and Akshara’s engagement, seeing his engagement ring. Abhimanyu falls down again feeling betrayed. On the other hand, Akshara keeps worrying about Abhimanyu’s whereabouts and asks Neil. Neil tells Akshara that he understands her feelings. He tells Akshara that a normal person gets scared after getting so much happiness, thinking that his/her happiness should/might not be taken away from him/her.

Akshara tells Neil that he is right. Neil says even he feels like this sometimes. He tells Akshara that it’s quite normal, everyone feels like this. Neil leaves asking Akshara to relax, Abhimanyu will return. Akshara hopes that Abhimanyu will be fine. On the other hand, Abhimanyu recalls Akshara telling him that his love gave her the biggest happiness of the world but her another world is her family. Abhimanyu keeps on running and recalling Akshara’s words and Harsh’s advice that a new trust is the foundation/basis of every relationship. He recalls Harsh explaining to him that everything ends, once the trust breaks.

Abhimanyu also recalls Private investigator revealing that there were two girls in the car, which hit Manjiri. He suddenly collides with something and is about to fall on some sharp object. On the other hand, Akshara keeps worrying about Abhimanyu and the drink tray falls down by her mistake. Everyone gets worried for Akshara. Akshara says she is fine. Goenkas apologizes to Birlas for the broken glasses and tray. Anand says it’s fine. Everyone wonders where Abhimanyu went. Parth says maybe Abhimanyu went to examine Sethia uncle’s health. Manjiri and Parth tell Akshara that Abhimanyu is Sethia uncle’s favorite and they have been attached to each other since long.

Kairav says Abhimanyu is a cardiologist and this they should accept that he can vanish like Mr. India any time. Everyone laughs hearing this. Shefali feels strange, when Parth tells Akshara that there was nobody in the house till now, who can ask Abhimanyu to return home soon. He also tells Akshara, either she will get habitual of Abhimanyu’s schedule or he will get habitual of her. Everyone laughs again. Goenkas thanks Birlas and takes a leave. Akshara changes her worried thinking. Abhimanyu on the other hand, is seen fallen and unconscious. Goenkas return tired to their own house. They get shocked seeing Akshara dancing and jumping, still with energy left in her.

Akshara asks her family why they got tired so early before marriage. She tells her family that being the bride’s family, they should not get tired till they bid her farewell. Akshara asks her family, especially her brothers to stand up and prepare for her wedding’s next function. Vansh asks Akshara what is the next function. Kairav says Mehendi. Akshara tells her family that they need to decide the theme, costume and food for her mehndi function. Goenkas requests Akshara to let them rest for some time. Akshara refuses Goenkas requests for rest. Kairav and Akhilesh ask Akshara to understand that after resting, they will get fresh and good ideas.

Tired Aarohi tells Akshara that the thing they were worried about is sorted now. Swarna, Manish and Akhilesh ask Aarohi what she was tensed about. Aarohi lies to her family that she was talking and worried about missing Abhimanyu. Goenkas believes in Aarohi. In a low voice, Aarohi tells Akshara that by mistake the truth almost slipped out of her mouth. Akshara in a lower voice tells Aarohi that this happens, if guilt is filled in heart. She starts praising Abhimanyu’s goodness thinking that he forgave her and Aarohi for such a big mistake. Aarohi asks Akshara to not start her “Abhi puraan”. Akshara asks Aarohi to go and rest. Aarohi leaves.

Akshara feels bored and wonders what to do. On the other hand, Abhimanyu recalls the Private investigator revealing Manjiri’s accident’s truth and the culprit to him. He starts doing tandav in anger, in a forest-like place. Abhimanyu screams out his anger. All this turns out to be Abhimanyu’s dream. At Goenka house, Akshara dances with Abhimanyu’s 3D cardboard portrait sculpture. Everyone joins Akshara and dances happily. Goenkas together starts deciding themes and preparations for Akshara’s mehendi ceremony. Abhimanyu on the other hand, recalls Manjiri’s accident and how Akshara breathed heavily while wanting to tell him something.

He recalls how Akshara turned what she wanted to actually tell him and said that she and Aarohi had a fight. Abhimanyu gets determined to get an answer from Akshara, why she hid the truth from him, till now. Later, Akshara receives Abhimanyu’s message, telling her that he is sending a car for her and asking her to come soon. Aarohi asks Akshara whose message it is. Unaware of the truth, Akshara tells Aarohi that Abhimanyu has called her somewhere as he has planned a surprise for her. Aarohi asks Akshara why Abhimanyu again planned a surprise for her. Akshara asks Aarohi when will they do all this, if not before marriage. Aarohi asks Akshara to go now.

While leaving to meet Abhimanyu, Akshara decides to get the mehendi applied according to the design chosen by Abhimanyu. Akshara gets shocked seeing Abhimanyu’s sent driver, dropping her to the location where her and Aarohi’s car hit Manjiri. She gets tense recalling her and Aarohi’s car accident, which almost killed Manjiri. Akshara worriedly walks towards Abhimanyu. In the next episode, an angry Abhimanyu will tell Akshara that a lie eats a person from inside as well as his/her relations badly from outside. Akshara will try to stop Abhimanyu from leaving. She will request Abhimanyu to not punish her for what she hasn’t done. Later, through a text, Akshara will get to know that Abhimanyu called off their marriage. She will get shocked and teary eyed.

Reviewed Rating for Yeh Rishta Abhi breaks marriage 18th April 2022 Update: 4/5 This rating is solely based on the opinion of the writer. You may post your own take on the show in the comment section below. 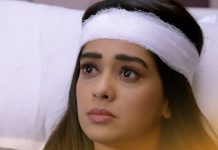