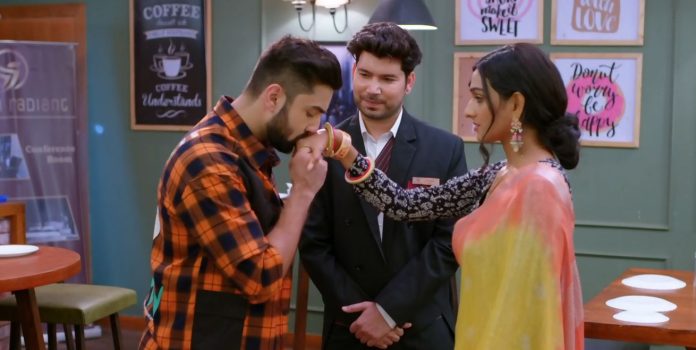 Bhagya Lakshmi 20th April 2022 Written Update Rishi kisses Lakshmi Karishma and Malishka find Lakshmi cooking the food in the kitchen. Malishka tells that Lakshmi shouldn’t take the lunch for Rishi. Karishma replies that she can do anything to unite Rishi and Malishka. She hates Lakshmi. She tells that she will spoil the food somehow. She goes to Lakshmi and acts of helping her. She deliberately drops the cooking pan on the floor. Lakshmi is shocked on hearing Karishma’s scream. Karishma pretends to get a burn. She signals Malishka. Shalu sees Malishka and Karishma hiding and keeping a watch on Lakshmi.

She follows them. Lakshmi tells Shalu that she didn’t come to Oberoi house for Rishi’s love, but for his life. She has to stay close to Rishi at any cost. She takes the lunch for Rishi in time. She finds him eating the food in the canteen. She stops him and asks him to have the food she has prepared for him. Rishi and Lakshmi get into a moment. Rishi is forced to kiss her hand in front of the staff. Ayush and Malishka become the onlookers.

Earlier in the show, Ayush discusses work with Rishi. Rishi is still thinking of Lakshmi. He thinks to lessen the time and defeat Lakshmi in the challenge. Shalu meets Lakshmi. Lakshmi tells that the family is upset, but Malishka is troubling her a lot. She wants to be with Rishi and protect him. Malishka tells Karishma that she has to make Lakshmi away from Rishi, she is cooking the food for him. Karishma asks her to spoil the food. Malishka tells that she can’t spoil the food, but she won’t let the lunch reach Rishi on time. Lakshmi tells that she will stay around Rishi by threatening him of the judge. Both Lakshmi and Malishka decide to be close to Rishi.

Malishka calls Kiran and asks her to get the lunch prepared for Rishi in 30 minutes. Kiran asks her what’s the matter. Malishka asks her to not waste time, she can’t tell the complications on call. She asks Kiran to get the lunch ready. She wants to stop Lakshmi from reaching the office in time. Karishma tells that Lakshmi would be hurrying too. Malishka asks her is she sure of this. Karishma tells that she can do anything to make Lakshmi out and Malishka close to Rishi. Shalu likes the food made by Lakshmi. Lakshmi asks her to have some. Shalu tells that it’s the best. Lakshmi wants to go to Rishi. She tells Shalu that she can never cook the way their mom used to cook. She gets sentimental.

Shalu asks her to rush. Karishma goes to see the food. She praises the food and then drops the bowl, lying that her hand got burnt. Lakshmi cares for Karishma’s burn. She then checks the spoiled dish. Malishka thanks Karishma. She tells that she doesn’t trust Lakshmi, she will go to Rishi now. Shalu overhears them. Lakshmi cleans the kitchen. Shalu tells her that Karishma and Malishka planned and deliberately spoiled the food. Shalu gets angry on them. Lakshmi tells that she didn’t come for Rishi’s heart but for his life, the coming days will be threatening for his life, she has to stay around him by some excuse. Shalu asks Lakshmi not to lose so soon. Lakshmi tells that she can’t cook the lunch so soon.

Malishka reaches the hotel to meet Rishi. She asks the receptionist to not allow anyone to meet Rishi. She finds Rishi enjoying the food. He asks did she get the food prepared by Lakshmi. She asks didn’t Lakshmi come. He tells that he didn’t wish to give a chance to Lakshmi. She asks him not to turn sweet towards Lakshmi. He asks her not to suspect him, he is already feeling disturbed. Ayush confirms this. Rishi tells that he really liked the food. Ayush asks Malishka to sit and try the food, he will also like the taste. Malishka also likes the food. Lakshmi reaches there. Rishi asks Lakshmi did she come finally. She reminds that he had called her. He tells that he had finished his lunch.

Rishi kisses her hand and asks is she sure that she has cooked the food. Lakshmi asks him to check the cctv footage. She tells him that the food which she made at home fell down and got spoilt, so she came to the hotel and made the food. She really likes the way they praised the food she made. She tells Rishi that she had presented the food on time. She borrows his laptop to do some work. She wants to stay with him in office. Malishka tells that Rishi didn’t do right. Rishi gets upset. He still likes the laddoos and eats it. Lakshmi sits in his cabin. She calls Shalu and tells her that she is in Rishi’s cabin. Shalu teases her about Rishi.

Lakshmi tells her that she is finding excuses to be around Rishi and go close to him. Rishi overhears her. He gets confused. He confronts her about coming close to him. She tells that he is misunderstanding her. He asks her what was she telling Shalu. He asks her how close does she want to come, if she wants to share the bed with him. Lakshmi tells him that its nothing like that, he is thinking wrong, she wants to become close as a friend. She adds that she doesn’t get such feeling of love when she sees him. Rishi asks her what does she mean. He praises himself.

She tells that she won’t feel anything for him if he makes her jealous. He tells that he never saw her romantically, he never gave her a reason to feel. She tells that she doesn’t have that love feeling for him. He goes close to her to make her feel for him. They share a romantic moment. She tells him that she isn’t feeling anything. He tells that they are in the office, so she won’t feel anything. Lakshmi laughs at him. She falls into his arms, just when Malishka enters the cabin. Rishi tells that he had saved Lakshmi from falling. Malishka reminds that he couldn’t save her from falling.

Reviewed Rating for Bhagya Lakshmi 20th April 2022 Written Update Rishi kisses Lakshmi: 5/5 This rating is solely based on the opinion of the writer. You may post your own take on the show in the comment section below.