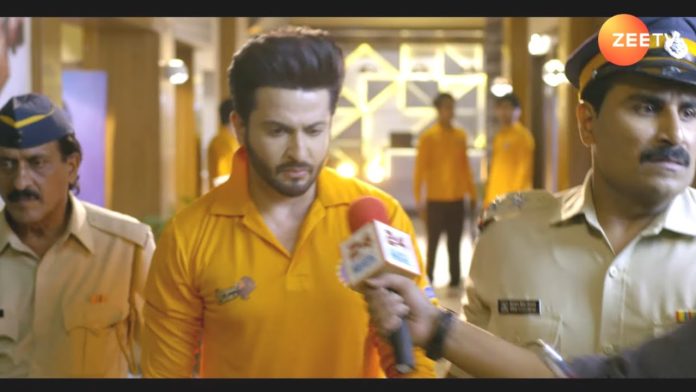 Kundali Bhagya 20th April 2022 Written Update New track Police inspector reaches Karan to arrest him. Karan is shocked to know about the arrest warrant. The player asks who will play instead Karan. The team manager tells that he has already arranged a backup player to play in Karan’s place. Karan feels disgrace when the police arrests him and drags him out of the cricket stadium, while the media captures the arrest news. He gets adamant to play the match, but in vain. Police doesn’t entertain his passion and excitement for the game. Luthras wait for Karan to come for batting. They are excited to see him play. They get a huge shock when Karan’s arrest news airs. Karan gets helpless to avoid the media questions and leave with the police. Preeta is much worried to see Karan’s dreams breaking. She rushes to the police station to meet Karan. Prithvi gets a victorious smile.

Earlier in the show, Preeta is upset that Karan ignored her. She doesn’t know that the person she had seen was not Karan, but Prince. Karan asks her what’s the matter. She wants to know what happened to him. He asks her why is she angry. She asks him to behave as he wants. Sandesh and Prince shake hands, while Prithvi clicks their pictures. Sandesh gives the money to Prince. Prithvi is certain that now Karan will ruined. He tells that he has got superb pictures and videos, nobody will know that Prince isn’t Karan. He shares a laugh with them. He hears Karan and Preeta’s voice. Preeta finds the room locked. Prithvi stops Sandesh from opening the door. He wonders what would he do now. Sandesh tells that they will get caught if Karan and Preeta break the door and come inside. Karan tells that they both are outside, who is inside to lock the door.

Prince finds an idea. He suggests Prithvi that they shall leave and then unbolt the door by the string. Prithvi likes his idea. He ties the string to the bolt and makes an exit from the window. He takes Prince and Sandesh with him. Karan and Preeta enter the room and don’t see anyone. Karan tells that maybe the door got jammed. He asks Preeta why is she angry. She doesn’t tell him anything. Prithvi celebrates his soon to be availed victory. Sherlyn asks him the reason.

She tells that she had seen him so cool, calm and happy long time back. He tells that even he doesn’t remember this kind of happiness and peace earned before. They share some drinks. She asks him what is the reason. He dances with her. He tells her that Karan will be ruined, Luthras can’t undo this big loss, the family is proud of Karan’s success and fandom, but very soon the family will see defamation because of Karan, even Preeta won’t be able to save Karan this time, Karan will be going to the jail. He wants to get peace.

He promises a lifetime defamation of the Luthras, that they will never forget. Sherlyn asks him what good thing will happen with them. He tells that they will become a couple officially, and they won’t hide from the world. He adds that his plans will ruin everything, Preeta will cry helplessly and then he will be rejoicing. Sherlyn gets excited to see this happening. Karan asks Preeta why is she showing attitude. She confronts him for insulting her, he didn’t stop on her call. He asks when did she call him, he isn’t her puppet or employee to take her orders. She asks him to do what she tells him, because she is the house owner. He asks her to explain. She doesn’t want to explain the rules again.

Later, Sameer tells Sherlyn that he is waiting for Karan, he has to go and drop Karan for the match, Rishabh always used to motivate Karan before the match. He misses Rishabh. The family blesses Karan and asks him to become number one again. They know that he will win like always. Karan promises that he will make them proud. He asks for Preeta. She gets the sugar and curd for him. She gives her best wishes. She tells that if he is stressed out then the sugar will calm him down. She wants him to play well without feeling any pressure. Karan thanks the family. Sameer and Karan leave.

Kritika taunts Preeta for becoming so sweet when its about money. Preeta asks Kritika to stop taunting her. Bani finds Kritika saying the right thing. Rakhi asks them to stop arguing and watch the match. Natasha thinks Sherlyn is jealous and upset on seeing Karan’s success. She feels Preeta’s fate is really good. Preeta prays that everything goes well. Sameer asks Karan to play well. Karan meets the media reporters. He tells that he is getting late, he will talk to them later. He answers their few questions. Prithvi is also around. He likes Karan’s dialogue, expect the unexpected.

Furthermore, Karan tells the reporters that he will want his team to win, he won’t mind hitting a century today. He sounds confident. He gets triggered by a reporter’s wrong question. Sameer calms down Karan and takes him to the car. They leave for the stadium. Prithvi calls the reporter and gives the tip. He gives him the breaking news of Karan’s match fixing. Natasha tells Sherlyn that Prithvi has lost everything after Preeta came back, he has no value, even the servants don’t respect him, Karan is back on the top, Karan is the best cricketer, he will play well this time and earn his lost name back.

Sherlyn is glad to see Natasha’s loyalty. She tells that this time Preeta is ruining herself, Prithvi’s plan will fail Preeta and Karan’s hard work, Karan won’t be able to play. Natasha asks her what is she planning. Sherlyn asks her to go and watch the tv to catch the breaking news. She wants Preeta to turn helpless. She wants her revenge on Preeta. Preeta makes a prayer for Karan’s success. She tells that Karan should get confidence and strength to play the best and become a hero for the world.

Reviewed Rating for Kundali Bhagya 20th April 2022 Written Update New track: 4/5 This rating is solely based on the opinion of the writer. You may post your own take on the show in the comment section below.