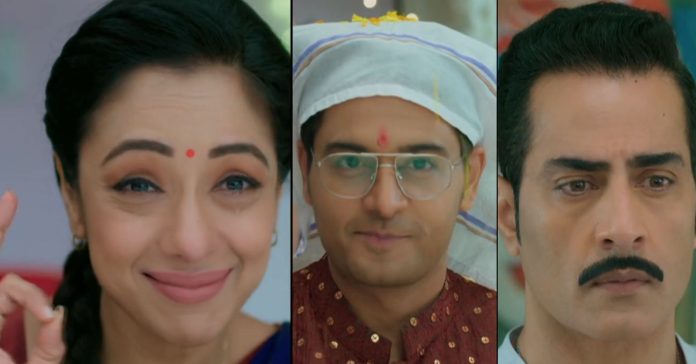 Anupama 20th April 2022 Written Update Vanraj reacts Samar asks Anupama to sign some papers. Anupama asks what papers are these. Samar tells Anupama that it’s passport application as she was told that she may have to do international shows too. Anupama tells Samar that she recalled the time when for the first time her passport was made. Samar feels shocked as well as surprised and asks Anupama if she had a passport earlier too. Anupama asks Samar if she can’t have a passport. He tells Anupama that yes she can have one.

Samar jokingly asks Anupama if visiting his maternal grandmother’s house nearby needed a passport. Anupama playfully slaps Samar’s arm for joking. She tells Samar that she got her passport made for going to America. This stunns Samar and he asks Anupama where her passport is now. Anupama tells Samar that like her dreams, her passport expired too. Samar tells Anupama that it’s fine. He says like she finally moved ahead to her new dreams, her new passport will also come soon. Anupama says a person should sit and watch their old story if it comes in front of their eyes.

Anupama’s supporters catch her red-handed, checking on the shagun thaal of her first wedding ritual. They tease her saying, “awe…. . Anupama defends herself saying that she was checking if everything is kept properly. Bapuji, Kinjal and Dolly ask Anupama to check and tell them if something is lacking in the shagun thali. Shy Anupama says everything is fine. Baa feels angry seeing everyone happy for Anupama. Samar asks what they’re doing now as they already did some ritual with Anuj earlier. Kinjal says Bapuji told that earlier they made Anuj their family member in just talks as it was the beginning of festivals of wedding.

Bapuji explains that according to their Gujrati rituals, marriage actually happens after the ritual they are going to perform today. He also explains that in this ritual, the bride’s father and family goes to the groom’s house, applies tilak and gives shagun to the groom. He says after this ritual, the groom is considered a part/member of the bride’s family then. Mamaji jokes, Bapuji scolds him and explains to him that a person should not make fun of marriage and its rituals/ceremonies. All of Anupama’s supporters get excited when Bapuji says the actual wedding begins now.

Baa feels tense and wonders why her mother isn’t picking up the call. Dolly informs Bapuji and Anupama that Sanjay got busy in an important meeting, whose schedule changed from yesterday to today, thus he won’t be able to come today. She apologizes to Anupama. Anupama tells Dolly that there is no need to apologize as she understands work commitments. She says even Bhavesh won’t be able to join them today as even he didn’t get leave from office today. Baa smirks happily, overhearing this. She comes in front and taunts Anupama telling her that her first wedding ritual will be left incomplete as it needs 4 men and only 3 (Samar, Bapuji and Mamaji) are available.

She reminds Anupama that 4 men from their family are needed for this ritual and she can’t involve any strangers in it. Vanraj comes there and sees the preparations made for Anuj and Anupama’s tilak ceremony. He recalls his own tilak ceremony day. Vanarj wonders why he is feeling so bad, seeing his ex-wife, Anupama moving on. He wonders if everyone really feels the anger and jealousy like he us feeling. On the other hand, Devika finds Anuj preparing Gujarati food in the kitchen. She starts recording him and tells him that she wants to show the world that boys can be a good human being like him too and should be.

Devika hugs Anuj tightly and tells him that she is very happy for him and Anupama as they are made for each other. Anuj asks Devika to let him prepare food as his maternal family is coming. Devika corrects Anuj and tells him his in-laws are coming, not maternal family. Anuj asks Devika, if Anupama can consider and treat his family as her’s, then why can’t he do the same. He says by this logic, Anupama’s family can be considered his maternal family. Devika laughs and asks Anuj if he doesn’t have an in-laws house. Anuj jokingly tells Devika he has two maternal houses and she is his mother-in-law. He asks Devika to show a strict mother-in-law attitude to Anupama as she may get spoiled with his unconditional love.

Devika tells Anuj that he and Anupama don’t even have the margin to get spoiled. She also tells Anuj that every son and daughter should be like him and Anupama respectively. Anuj hugs and tells Devika that every friend should be like him. At Shah house, Baa asks everyone why they are seeing her son weirdly. She says Vanraj won’t attend Anuj’s wedding ritual. Bapuji scolds for thinking such a weird thing. He asks Baa to think before speaking. Baa asks Bapuji why she should think before speaking when he doesn’t think of anything before doing. Bapuji asks Baa to stay quiet as he won’t tolerate any wrong thing or word in his daughter’s wedding.

Both Baa and Bapuji continue arguing with each other. Anupama asks them to get silent. She says it’s fine if there are three people as GK can be the fourth one. Baa says GK is from the groom’s side and can’t be involved in the ritual from the bride’s side. She asks them to go if only three men want to go. Baa warns them saying, “teen tigada kaam bigada”. All Anupama’s supporters get upset. Anupama gives Bapuji’s medicine to Samar and asks him to give it to Bapuji on time. She also gives careful instructions to Pakhi and Kinjal. At last, she asks Dolly to keep her eyes on everyone and take care of them. Bapuji says even if a mother is becoming a bride but she remains a mother from inside.

Bapuji apologizes to Anupama that her ritual would remain incomplete. Anupama tells Bapuji that it’s fine as happiness shouldn’t remain incomplete. Paritosh comes and joins Anupama’s supporters. He joins as the fourth man of Anuj’s first wedding ritual. This makes everyone, except Baa and Vanraj, happy. Bapuji asks Baa to see God sent 4th men too. Anupama thanks God. On the other hand, Malvika and Devika feel irritated with Anuj applying a lot of deo. They explain to Anuj that they need to talk to Anupama’s maternal family as soon as possible.

Anuj gets into thinking. At the same time Anupama’s supporters and family reach Anuj’s house. Devika and Anuj’s family welcomes them. Mamaji and GK jokes on Anuj’s deo’s over extra application and fragrance. Anuj and his family get stunned with Paritosh’s arrival with Anupama’s supporters. Anuj and Malvika recall Paritosh’s disagreement and anger with Anuj and Anupama’s marriage. Malvika and Paritosh recall how in their last meeting, Malvika fired Paritosh, Vanraj and Kavya from the kapadia company. Anuj thanks Paritosh for coming. He asks Bapuji if Anupama will arrive later.

GK and Bapuji call Anuj a donkey. They explain to Anuj that the bride doesn’t attend this ritual. Everyone laughs seeing Anuj’s desperation for being with Anupama. Anuj worries thinking that Anupama is alone with Vanraj and Baa at Shah house. On the other hand, Anupama serves tea to Baa. Baa asks Anupama if she mixed ginger and poison in her tea. This shocks, irritates and upsets Anupama. Baa tells Anupama that she looks happy. Anupama replies that she would obviously be happy as she is getting married. Baa rudely tells Anupama that she didn’t get married till now. Anupama asks Baa to not say all this as she won’t also always keep silent, hearing all these ill words from her.

This confident behavior of Anupama, shocks Baa and Vanraj. Baa with full attitude asks Anupama what she will do if she continues her ill words. Anupama confidently tells Baa that no one will be to stop her and Anuj’s wedding by using any means. She requests Baa to not use ill words, otherwise she is also a human who gets hurt. Anupama says maybe she can speak out ill words against this house being overhurt. This shocks Baa and Vanraj. Baa asks Vanraj to see that Anupama wasn’t this much happy in her first wedding. Baa and Vanraj feel irritated. Anupama in her room, receives Devika’s call.

Devika tells Anupama to keep watching Anuj on video call as he isn’t ready to start any wedding ritual without her. Everyone teases Anuj and Anupama for giving signs to each other using their eyes. Anuj asks Bapuji what happens in this ritual. Bapuji and family scare Anuj by explaining to him the ritual in an over-exaggerating way. Malvika tells Anuj that all this happened in her wedding too. Anuj asks when. Malvika tells Anuj that he was busy with caterers, when GK got this ritual performed. Dolly tells Anuj that he will have to do all this, if he wants to get married to Anupama. Anupama secretly signs Anuj and the latter gets relaxed. Anuj tells everyone that he is ready to do anything to marry Anupama.

In the next episode, Anupama will start dancing in her room watching everyone dancing at Anuj’s home. Vanraj from behind will watch Anupama’s video call with her supporters and Anuj’s family. He will get shocked and feel a little angry seeing Samar and Paritosh washing and drying Anuj’s feet and Pakhi tying a handkerchief on Anuj’s head as per rituals. Bapuji will start feeling restless and ill as everyone forgot to give him his medicine being busy in all the happiness and rituals. Even Bapuji forgot to take his own medicine.

Reviewed Rating for Anupama 20th April 2022 Written Update Vanraj reacts: 4/5 This rating is solely based on the opinion of the writer. You may post your own take on the show in the comment section below.