Kumkum Bhagya 21st April 2022 Written Update Unexpected Ranbir fights Nick and his goons. He finally reaches Prachi, who gets dizzy due to the stress undertaken in the pregnant state. Ranbir calls out Prachi and asks her to pass the gun to him. Prachi feels nausea and runs away from there, leaving Ranbir badly trapped. Ranbir gets caught by Nick and struggles to get free. He wished Prachi passed him the gun in time and rescued him. Ranbir still manages to defend the goons’ attack, but grows worried for Prachi, who seemed really unwell to him. Ranbir wants to know the cause of her leaving. Will Nick reveal Rhea’s name to Ranbir and Prachi? Will Ranbir learn about Prachi’s pregnancy, or will Rhea put Prachi in wrong frame once again? Keep reading.

Earlier in the show, Vikram, Pallavi and Shahana also reach the godown. Vikram and Pallavi start arguing. She asks him if he wants to blame her. Vikram asks her to calm down. He tells that they shall go inside the place silently, else they will also get caught. Aaliya asks Nick to go to Ranbir and then find a chance to kill Prachi. Ranbir asks the goons to find Nick. He shouts to summon Nick. He asks Nick not to play the game with him. A goon hides Prachi from Ranbir. Nick is in a dilemma. Aaliya tells Rhea that they shall hide from Ranbir. Ranbir asks Nick to come in front of him, else he will break the deal and kill him. He gets Prachi’s anklet. He looks for Prachi. He fights a goon. Ranbir gets to see Prachi tied up there.

Ranbir beats the goon. He asks Prachi is she okay. He wants to know if she is hurt. She cries and hugs him. Ranbir consoles her. He tells that he has come, he will take her home, she should trust him even if her courage breaks. He takes her and tries to flee from there. Nick changes his mind because of Rhea. Nick takes Ranbir at gun point. He asks Ranbir to understand where he is standing. Ranbir asks Nick why did he hurt Prachi. Nick demands the money. Prachi asks Ranbir to give the money to Nick, she is scared and wants to go home. Ranbir tells that they will go home, but not on Nick’s conditions.

Prachi insists him to give the money to Nick. A goon catches her and points the knife at her stomach. He threatens to stab her stomach. Prachi cries and asks Ranbir to do as the goons are saying. She wants Ranbir to pay them and take her home. Ranbir decides to fight them. He loses his cool and bashes the goons, while Aaliya and Rhea secretly see the fight scene. Prachi worries that Ranbir may get hurt. Rhea wants to hide somewhere else, so that she isn’t caught. Aaliya asks her to come with her. They find a safe place. Nick drops the gun during the fight. Ranbir gets badly caught.

Prachi asks the goons to leave Ranbir. She feels nausea and dizziness. Ranbir shouts to Prachi and asks her to pass the gun to him. Prachi runs away from there. Vikram, Pallavi and Shahana try to enter the place and find out what’s happening. They hear Ranbir screaming. They rush inside knowing a big fight is happening. Aaliya and Rhea leave from the other side. They hide seeing the family members. Pallavi falls down. Aaliya and Rhea make a leave. Ranbir bravely fights the goons.

Nick hinders Ranbir. Ranbir gets beaten up. Rhea sees this from far and blames Prachi for the fight. She doesn’t save Ranbir. Vikram, Pallavi and Shahana reach there. Vikram and Pallavi scold Ranbir for risking his life. They beat the goons to save their son. Ranbir asks Vikram why did he get Pallavi and risk her life. He catches Nick and beats him red and blue. Prachi comes back and sees Ranbir’s madness. Ranbir asks Nick why did he hurt Prachi despite his warnings. Prachi asks Ranbir to spare Nick, she is okay, if anything happens to Nick, then Ranbir will get jailed.

Ranbir angrily breaks Nick’s hand to punish him for touching Prachi. Prachi stops Ranbir and tries to calm him down. She tells that she is okay, he should spare Nick. Ranbir tells that he has sworn to find the culprit. She asks him to end the matter. He tells that they didn’t find the real culprit till now. He drags Nick and asks him to reveal the name of his boss. He takes Nick at gun point. He demands the name of the person who hired him to kill Prachi. Aaliya and Rhea get scared thinking Nick will take their name. Ranbir asks Nick to tell the name, else he will die.

Vikram asks Ranbir to stop the madness, the police will find the name. Pallavi asks Ranbir did he lose his mind. Ranbir tells that he is really going mad, he wants to know who is trying to harm Prachi, who is the family member dragging the enmity to this level. He counts down and threatens to shoot Nick. Nick gets scared for his life and names Rhea. The Kohlis are shocked to know Rhea’s crime. Aaliya and Rhea get terrified. Nick tells that Rhea didn’t want Prachi to stay alive, she had hired him. Pallavi tells that he is lying. Shahana tells that she had heard Aaliya and Rhea saying that they failed in killing Prachi. Ranbir and Prachi can’t believe it. Rhea panics and runs away.

Aaliya asks Rhea what is she doing. Rhea tries to save herself. She hurts herself and screams. Aaliya asks Rhea to get up. Rhea hits her head somewhere and spoils her hair. She madly slaps herself and then runs to Ranbir. Prachi tells that Rhea is her sister. Ranbir acts kidnapped by Nick to save herself. Vikram and Pallavi rush to save Rhea. They untie her from the chair and find her injured. Rhea hugs Pallavi and sheds tears. Aaliya sighs a relief seeing the things changing in their favor. Rhea acts scared and hugs Ranbir. She tells him that Nick kidnapped her and tied her, Nick was going to kill her. She thanks him for coming. Ranbir finds her too hurt. Rhea tells Ranbir that Nick has beaten her.

Ranbir gets confused. He wants to know the attacker’s truth. He consoles Rhea and falls in the trap of her fake tears. Ranbir slaps Nick for the lies. He tells Nick that Rhea isn’t the person who hired him to kill Prachi. He asks Nick to tell the truth. Shahana tells Ranbir that Rhea is lying, she had heard that Nick took her name, so she is acting and faking stories to save herself. Rhea asks her if she has injured her to clean her name. She asks Shahana to get sensitive and not call her a liar. Ranbir tells that they can’t judge Rhea. Shahana tells that Rhea knows Ranbir’s desperation, she is doing this to save herself.

Ranbir tells that police suspected all the family members. Shahana tell that she had heard the truth. Ranbir tells that Rhea can’t torture herself. He slaps Nick. He gives Nick a last chance to say the culprit’s name. Nick goes mad in tension and points at Prachi. He apologizes to Prachi. He tells her that he can’t lie further, he has to be alive. He tells Ranbir that Prachi has paid him to attack on her. He recalls Aaliya’s plans. Aaliya had asked him to name Prachi as the boss.

Nick asks them if Ranbir will believe the illogical thing, Ranbir will ask him why would Prachi do this. Ranbir really asks Nick is he mad, why would Prachi do this. Nick tells Ranbir that Prachi has done this to get his attention, she wanted Ranbir to become her protector, she feels alone without Ranbir. Nick gives instances that Prachi had saved him. Ranbir asks Nick why did he kidnap Prachi. Nick puts the blame of the entire plotting on Prachi. Ranbir tells that Prachi can never do this, its impossible. Prachi stands shocked by the accusation.

Reviewed Rating for Kumkum Bhagya 20th April 2022 Written Update Revelation: 3/5 This rating is solely based on the opinion of the writer. You may post your own take on the show in the comment section below. 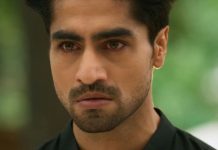