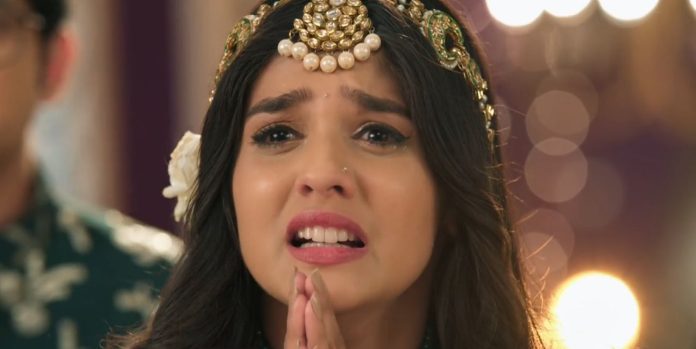 Yeh Rishta Akshara big sacrifice 20th April 2022 Update Aarohi asks her family why they have to grind the mehendi on their own. She also asks why they can’t buy ready-made mehendi from the market or either grind it in a mixer. Suhasini and Swarna explain to Aarohi that grinding wedding mehendi from hand is considered auspicious. Everyone laughs when Suahsini asks Aarohi if she will take sister’s shagun for pressing the mixer’s button. Vansh and Kairav sit with Aarohi to help her in grinding Akshara’s wedding mehendi. Akshara sees her family with worry in her heart and mind.

She recalls Abhimanyu’s anger, scoldings and harsh words. Swarna receives Manjiri’s call. Manjiri tells Goenkas that they will have to cancel all the bookings they made for marriage. Goenkas gets shocked and worried. Manjiri smiles and asks Goenkas to not misunderstand Birlas. She tells them that they got the bookings of the Jaipur destination, where Akshara wished her marriage to take place. Goenkas gets happy and relaxed. They tell Manjiri that she thought of a very good idea. Manjiri tells Goenkas that Abhimanyu thought of all this as Akshara once told him that she also wants a fairy tale destination wedding like her parent’s wedding.

Abhimanyu comes there and overhears Manjiri’s conversation with Goenkas. Tense, Akshara feels a little relaxed. Kairav takes Akshara and Manjiri takes Abhimanyu to talk on video call with everyone. While Abhimanyu feels angry seeing Akshara, Akshara feels guilty and worried. Suhasini wards off evil eyes from Abhimanyu and Akshara and blesses them with happiness. Abhimanyu receives a call and leaves informing that there is an emergency at the hospital. At the hospital, Abhimanyu takes charge of a critical case. On the other hand, Akshara recalls Abhimanyu’s scoldings and harsh words. She feels guilty recalling that Abhimanyu wished that she would have chosen their relationship instead of career in the past.

Aarohi comes and asks Akshara what happened. Akshara again recalls Abhimanyu’s scoldings. Aarohi leaves asking Akshara to come downstairs, if she wants cold coffee. Akshara thinks how to tell Aarohi whatever Abhimanyu said. Akshara sees her mehendi outfit and jewelry and tries to cheer herself up. At the hospital, the ward boy tells Abhimanyu that the patient is very restless and his mind isn’t calming down, even after they applied an injection to him. Abhimanyu says calming a patient’s mind is very important as anxiety isn’t good for health.

From outside the OT. Akshara starts singing “lag ja gale” for the critical patient being a music therapist. Abhimanyu recalls his first meeting with Akshara and feels a little angry. Ward boy tells Abhimanyu that he called Akshara here as he (Abhimanyu) only explained to him that music therapy helps in such critical situations. Abhimanyu feels a little distracted but continues operating the patient. Akshara looks at Abhimanyu with tears in her eyes and keeps singing as per her duty being a music therapist. Seeing Abhimanyu ignoring her, Akshara in her thoughts asks Abhimanyu why he is trying to stay away from her as fate brought them in front of each other in 2-4 hours of their fight/argument.

On the other hand, Goenkas works hard for Akshara’s mehendi and marriage preparations. Swarna tells Suhasini that Akshara is lucky to get Abhimanyu and good in-laws as they and Abhimanyu fulfilled her wish of destination wedding. Aarohi feels a little jealous. On questions, Swarna tells everyone that Akshara went to hospital to give music therapy to a critical patient as Dr. Rohan called her for that. Suhasini worries about why Akshara didn’t return till now as it got very late. Manish asks Suahsini to not worry as Abhimanyu is with her.

Swarna, Kairav and Manish say it’s good now Akshara and Abhimanyu will remain together at hospital as well as home, forever. Aarohi tries to feel happy for Akshara. At the hospital, Abhimanyu feels angry seeing Akshara waiting for him outside the OT. Ignoring Akshara, he asks his staff to get another OT ready as there is another surgery in the next 1 hour. Abhimanyu starts leaving to study the case, ignoring Akshara. Akshara stops Abhimanyu and tells him that she won’t stop waiting for him and not lose the hope of his arrival/coming.

Angry Abhimanyu leaves from there. Next morning, Manish, Vansh, Akhilesh and Kairav start a nagin dance, saying it’s Naksh’s favorite. Akshara, in her room, gets ready for her mehendi ceremony with sadness and worry. On the other hand, everyone gets confused and stunned seeing Abhimanyu working out, outside the hospital. They think Abhimanyu is very particular about his duties as well as relations and doesn’t want to miss anything from duty as well as his mehendi ceremony. While exercising, he recalls his private investigator’s accident revelation and Akshara’s confession that Aarohi was driving the car that hit Manjiri.

He feels like crying and hugs Manjiri tightly. Manjiri gets worried seeing Abhimanyu’s condition and asks him what happened. Abhimanyu tells Manjiri the truth about her accident, shocking her. On the other hand, Birlas reach Goenka Mansion and happily dance with Goenkas at the entrance. Goenkas asks Birlas about Abhimanyu, Mahima, Harsh and Anand. Neil tells Goenkas that Harsh, Mahima and Anand went for an important conference and will come directly from there. Parth tells Goenkas that Manjiri went to bring Abhimanyu from the hospital as he has been there since yesterday.

Abhimanyu says Akshara saw him in tension and burning in anger but still hid the truth to save her selfish sister, Aarohi. He tells Manjiri that Akshara staked his and her relationship, happiness and marriage to save Aarohi. Abhimanyu also tells Manjiri that Akshara didn’t think how they will feel after knowing the truth from someone/somewhere else. He reminds Manjiri that she failed to attend his engagement, even then Akshara didn’t tell him the truth. Abhimanyu says Akshara tried to save Aarohi, who always puts Akshara forward to cover up her mistakes. He asks Manjiri if he and his anger is wrong.

In the next episode, Abhimanyu will tell Manjiri that he can’t marry Akshara after knowing the truth. On the other hand, Goenkas will get shocked seeing police at their house. Akshara will try to get an apology from Harsh but he won’t listen to her. He will ask Akshara to just tell him who was driving the car, which hit Manjiri. Akshara will take the blame on herself to save Aarohi. This will shock everyone

Reviewed Rating for Yeh Rishta Akshara big sacrifice 20th April 2022 Update: 3/5 This rating is solely based on the opinion of the writer. You may post your own take on the show in the comment section below.