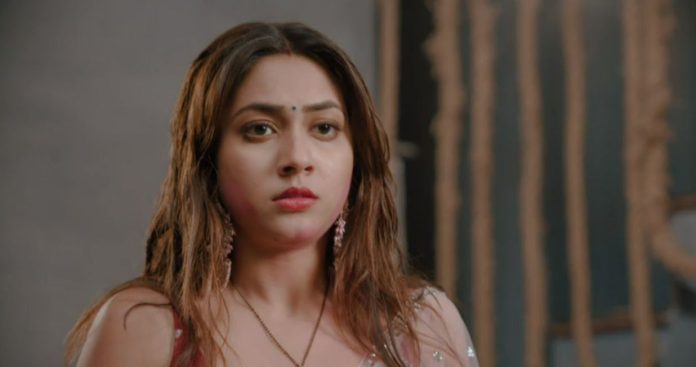 Fanaa 22nd April 2022 Written Update Payback Pakhi walks towards the sleeping Agastya with a knife in her hand. Agastya wakes up and asks if she wants to kill him. Pakhi stabs Agastya and the latter wakes up from his nightmare. He sees Pakhi sitting beside him and applying ointment on his burned feet. Agastya tells Oakhi that she doesn’t need to do this. Pakhi asks Agastya to not be stubborn and let her do whatever she is doing. Agastya feels happy and watches Pakhi with love and happiness in his eyes.

On the other hand, Sameer, Ranjit and Ishaan are seen searching for Pakhi and showing her photograph to people. Ishaan meets Daayi Maa and shows her Pakhi’s photograph, asking if she saw this girl somewhere. Daayi Maa says yes she saw this girl. Ranjit, Sameer and Ishaan get stunned. They ask Daayi Maa where she saw Pakhi. Suddenly a balloon seller comes and Daayi Maa remembers that Pakhi is living in her house with Agastya. She tells Ishaan and the police that she didn’t see Pakhi anywhere.

All of them get suspicious of Daayi Maa. Police officials of Jhajjar tell Ishaan, Ranjit and Sameer that Daayi Maa is quite a famous and strong personality in Jhajjar district. They also reveal about Daayi Maa’s problem of forgetting things. On the other hand, Agastya’s step-mother tells Yug that Agastya didn’t call him or help him get out of prison. She tries to make Yug realize that Agastya was just using him to do all his wrong work and never cared for him. Agastya’s step-mother asks Yig what he got by putting his own life in danger for Agastya. She asks him to realize that he has no place or importance in Agastya’s life. Agastya’s step-mother asks Yug to support her in ruining Agastya.

Back at Jhajjar, Daayi Maa reaches the bungalow and tells Agastya that she met Ishaan, Police, Ranjit and Sameer in the market. She also tells Agastya that by mistake she made all of them suspicious. Pakhi also hears all this. Both Agastya and Pakhi get shocked. Within a few minutes, suspicious Ishaan, Ranjit, Sameer and police reach Daayi Maa’s house. They knock the door, scaring Daayi Maa and Agastya. Agastya runs and checks the door from a nearby window.

Seeing police, Ishaan, Sameer and Ranjit he starts fearing of getting caught and losing Pakhi at the same time. When nobody opens the door on Ranjit’s knocking, Ishaan shouts asking to open the door and knocks hard. Pakhi hears Ishaan’s voice and runs towards the main door. Agastya runs and stops Pakhi. He grabs her tightly and shuts her mouth. Pakhi struggles to get free from Agastya’s tight grasp. Daayi Maa asks Agastya to take Pakhi inside, till she handles people outside the door. As Agastya takes Pakhi inside forcefully, Daayi Maa opens the door. Everyone quickly walks inside and looks here and there. Daayi asks them what happened, why they came here.

Ishaan tells Daayi Maa that they met her in the market and asked about a girl named Pakhi from her by showing her photograph. He reminds Daayi Maa that she initially recognized Pakhi, but later on refused to recognize Pakhi. Daayi Maa lies that she hasn’t stepped out of the house since last one week. She asks them how she can meet them when she hasn’t stepped out of the house since last week. Daayi Maa asks them what they need. Police officials of Jhajjar tell Ishaan, Ranjit and Sameer that Daayi Maa frequently forgets things. Daayi Maa pretends to be an old forgetful woman. Ishaan, Ranjit and Sameer feel disappointed.

Ranjit tells Daayi Maa that Pakhi got kidnapped from Delhi and they suspect that she is held captive here. On the other hand, Agastya is seen holding Pakhi with her mouth shut. Pakhi struggles to escape him but Agastya refuses to leave her and get away from him. Everyone runs to search Daayi Maa’s whole house. Agastya’s fear of losing Pakhi increases. Daayi Maa stops the police, Ishaan, Ranjit and Sameer. She asks them why they are troubling a lone woman. Daayi Maa tells them that this house’s/bungalow’s owner lives in Delhi and visits once or twice in a year.

Ishaan searches for clues looking here and there in the house. He asks Daayi Maa if, being a villager, she eats corn flakes and oats. Daayi Maa stutters and asks if only town people can eat such things. Ishaan feels more suspicious and walks forward to search Pakhi with police and Sameer. He sees the room, where Agastya has kept Pakhi captive and finds it suspicious. Ishaan asks Daayi Maa, who lives in that room. Agastya feels scared and wonders how he forgot to close the door. Pakhi escapes Agastya and runs towards the door. Agastya runs behind Pakhi to stop her from going in front of Ishaan, Sameer and police.

Suddenly, Pakhi shocks Agastya by closing the room door, instead of going in front of police, Ishaan and Sameer. Daayi Maa stops everyone from going inside the room and says it’s closed as no one lives here. Ishaan says someone must be living here. At the same moment Dr. Girish comes and says he lives in this room and his stuff is kept inside. Ranjit asks Dr. Girish to introduce himself. Dr. Girish introduces himself as an employee of a nearby government hospital. He also shows his id card and Ranjit-Ishaan checks it. Girish lies to them that he shifted here for some time as renovation is going on his house. He says that he is friends with the owner of this house. Girish asks them why some inquiry is going on here.

Ishaan tells Girish that they are interrogating Daayi Maa because she said that she lives alone in this house but it didn’t seem like thatz seeing the house’s condition and things. Girish tells everyone that Daayi Maa forgets everything and even being a doctor he isn’t able to fix her problem till now. Ranjit shows Agastya and Pakhi’s photograph to Girish and tells him that they are searching for them. Constables come and tell Ranjit that they didn’t find anyone/anything in this house even after checking the whole house. Ranjit takes Girish permission to check the auspicious room to fulfill law’s formalities.

Girish permits them. Ranjit sends two constables inside to check. Pakhi and Agastya successfully hide themselves from the police. Ranjit, Ishaan and Sameer get disappointed on not finding Pakhi. Ishaan apologizes to Daayi Maa and Girish for troubling them. Ishaan, police Sameer and Ranjit leave from there. Daayi Maa and Agastya feel relaxed. Agastya hugs and thanks Girish for saving him. Flashback shows Agastya calling Girish and asking for his help. Girish tells Agastya that it’s fine and asks him to be careful next time. He leaves telling Pakhi that Agastya saved her and took good care of her.

Pakhi asks Agastya what is so special today. Agastya reminds Pakhi that it’s their marriage’s 3rd month anniversary. Pakhi apologizes to Agastya for forgetting this in all the fuss going on in life. Agastya tells Pakhi that it’s fine as he will remember this also for her. He asks Pakhi if tonight, can they start afresh, their new life. Pakhi sings in yes, making Agastya mad in happiness.

In the next episode, Pakhi and Agastya will be seen on a date together. They will also dance with each other. Pakhi will spike Agastya’s drink in his absence. Unaware of Pakhi’s plan, Agastya will drink the spiked drink and faint. Angry Pakhi will tie Agastya’s foot in the shackle just like he tied her. She will say that Agastya controlled her life enough but she won’t tolerate it anymore.

Reviewed Rating for Fanaa 22nd April 2022 Written Update Payback: 3/5 This rating is solely based on the opinion of the writer. You may post your own take on the show in the comment section below.