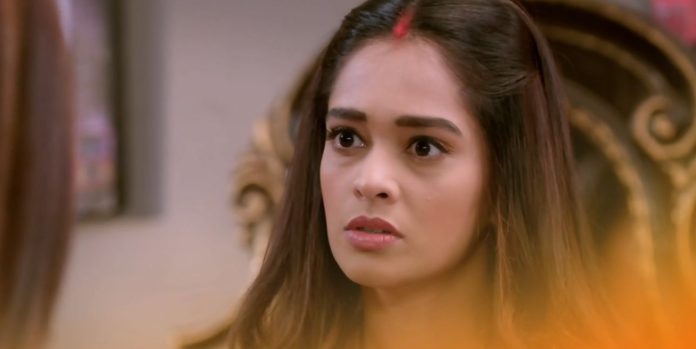 Kumkum Bhagya 29th April 2022 Written Update Prachi accused Prachi finds weird that Rhea isn’t confronting her and staying really calm. Rhea waits for the right time to accuse Prachi. She tells Aaliya that they have tried to brainwash Ranbir and now its time that they accuse Prachi in front of Pallavi. She is sure that Pallavi will believe her and then make Prachi away from them. She wants Prachi to get thrown out of the house. Rhea gathers the family. Rhea tells the family that Nick had run away from the house by using Prachi, she eased his exit by going with him, because she is the one who had hired Nick, but later Prachi planned her sister’s kidnapping.

Rhea accuses Prachi for getting her kidnapped by Nick to get rid of her forever. She tells that when Ranbir reached the warehouse, Prachi was shocked that her plan backfired, so she ordered Nick to kill her/Rhea, she asked him to shoot at her. She blames Prachi for being the mastermind and ruining their peace. She asks Prachi to look at Ranbir and pity him. Pallavi feels Prachi is punishing Ranbir knowing he loves her so much. Prachi can’t accept the nonsense, and reacts in anger. She slaps Rhea in rage. Ranbir, Pallavi, Shahana, Dida Vikram and Aaliya watch the drama. Prachi defends herself. Ranbir tells them that he trusts Prachi, she can never get herself attacked.

Earlier in the show, Prachi goes to Ranbir’s room and asks him how is he feeling now. He tells that he is good. She asks him to give her some time. She throws Rhea’s clothes outside the room. Ranbir asks her what is she doing. Rhea and Aaliya come there to see Prachi’s deed. Pallavi hears some sound. She tells Vikram that something is happening at home. He tells that he didn’t hear any such sound. She asks him if he spoke to the police about Nick. He tells that police will soon catch Nick. She tells him that Prachi didn’t let Nick get arrested. Rhea asks Prachi what is she doing. Prachi tells that she is getting her rights on her husband Ranbir. She shuts the door on Rhea’s face and smiles seeing Ranbir.

Prachi asks Ranbir how is he feeling now. He tells that he is okay. Rhea knocks the door. Prachi asks Rhea why is she disturbing them. She lectures Rhea. She tells Aaliya that she has taken this decision as a reaction to Rhea’s nonsense. Aaliya gets angry. Ranbir asks Prachi what did Rhea say. Prachi asks him to take rest. She wants to talk to him. He tells that drama always happens in the house. He wants to know why did Prachi throw her luggage outside. She answers that it was in a wrong room. Shahana is with Dida. Dida wants to know what’s happening. She wants to go out and see.

Shahana takes Dida. Ranbir asks Prachi is she shifting to his room. Prachi asks can’t she come. He asks her will she take this room also from him. She tells that she won’t share the room with Rhea, but she can share the room with him. She wants to stay with him and take care of him. She asks him if he would have any objection. She excuses herself. She asks Rhea to not make noise, let Ranbir lose. Prachi tells that she is shifting in this room to make Ranbir recover.

Prachi argues with Aaliya and Rhea. Rhea goes to call Pallavi. Aaliya gives a last warning to Prachi, who doesn’t care. She asks Prachi isn’t she listening. She asks Prachi to leave from the room. Vikram tells that he didn’t go to office for two days and work got piled up. He wants to see the work until Ranbir recovers. Rhea comes to them and informs that Prachi has thrown her belongings outside, and created a scene. Pallavi tells that Prachi will never change. Vikram thought he would sleep in peace, but doesn’t think its possible because of Prachi and Rhea’s clashes.

Ranbir feels sleepy because of the medicines. Prachi asks him to take rest. She is prepared to face Pallavi. Rhea brings Pallavi there and asks Prachi to open the door. Prachi opens the door. Pallavi checks the cupboard. She asks Rhea to get her stuff inside. Prachi opposes her. She asks them to leave, and let Ranbir sleep in peace. Pallavi orders Prachi to get out and let Rhea bring her stuff. Prachi tells that she is Ranbir’s wife, Rhea is wrong to put her belongings in someone else’s room. Prachi and Pallavi get into an argument. Prachi asks her to consider Ranbir’s health and not create such a situation that gives him more stress.

She know that Rhea will never understand the sensitivity of the situation, Ranbir feels uncomfortable when Rhea is around. She asks them not to impose their rules on Ranbir. Rhea asks Prachi not to say a word more. Pallavi tells that she asked Prachi to stay quiet for a few days, until Ranbir recovers, she didn’t want any drama, but Prachi couldn’t stay silent for a single day. Prachi tells that she had shut door for Ranbir’s peace, but everyone has come like they have to talk to him today itself. She asks Pallavi to care for her son Ranbir.

Pallavi tells that she is just Rhea’s Saas, not Prachi’s. Prachi replies that Pallavi can never reach the right destination by boarding a wrong vehicle, its totally wrong to support Rhea. She tells that she will not leave her husband alone. She requests Pallavi not to fight with her till Ranbir gets okay. She doesn’t want any reason that Ranbir gets stressed. Rhea accuses Prachi for getting herself attacked. She tells that Prachi has ordered Nick to shoot her. Prachi slaps her in anger. Aaliya shouts on Prachi for slapping Rhea. Prachi asks Aaliya to stop supporting Rhea.

She tells that Rhea has Aaliya’s bad values and bad upbringing. Rhea asks Prachi why did she try to kill her own sister when she got good values. Prachi asks why would she try to kill Rhea or get herself attacked. Pallavi and Rhea tell that Nick has exposed Prachi’s truth. Prachi asks Ranbir to tell her, if she can victimize herself to get his attention. Ranbir trusts her. Rhea asks Prachi how could she think of murdering her sister. She tells that Prachi should stop acting shocked. She cries that she didn’t get mum’s love in the childhood. She tells that she didn’t even get Prachi’s love.

Pallavi tells Dida that Ranbir had saved Rhea and got shot. Shahana tells that Prachi was the target. Prachi tells them that she will not give any explanation. Rhea tells that Nick has taken her name in front of them. Prachi tells that Ranbir will always be of her. Rhea asks her to stop it. Ranbir sits calm, but feels irritated by their argument. Rhea tells that she has got married to Ranbir. She rebukes Prachi. She asks Ranbir to tell them that he trusts her, they got married, but Prachi came back to ruin their marriage. She blames Prachi for ruining their peace and happiness.

She tells that Ranbir and she got close one night, but the next morning, he got away from her. She was happy that there will be a new start, but she was so dumb, he isn’t comfortable to stay with her. She asks him not to let Prachi humiliate her. She doesn’t want to tolerate anything. She pleads with him and asks him to stay with her. She knows Prachi was his past and she/Rhea is his wife. She asks why is Prachi coming between them all the time, its just because Prachi wants to kill her. Ranbir tells that the bullet wasn’t shot at Riya, but at…

Prachi asks Ranbir to tell them the truth. He feels sleepy. Rhea tells that Ranbir was worried for her, he loves her. Prachi asks Ranbir if Rhea is saying the truth. She tells that she didn’t wish to kill Prachi, but Ranbir and Rhea are really together, he wasn’t drunk in the warehouse when he was caressing Rhea, he was concerned for her. He asks her if she wasn’t concerned for Rhea. Prachi tells that she is Prachi’s sister. Rhea asks Ranbir to tell them that he loves her. Prachi feels his silence has humiliated her love. Rhea and Aaliya give a wicked smile.

Reviewed Rating for Kumkum Bhagya 29th April 2022 Written Update Prachi accused: 4/5 This rating is solely based on the opinion of the writer. You may post your own take on the show in the comment section below.