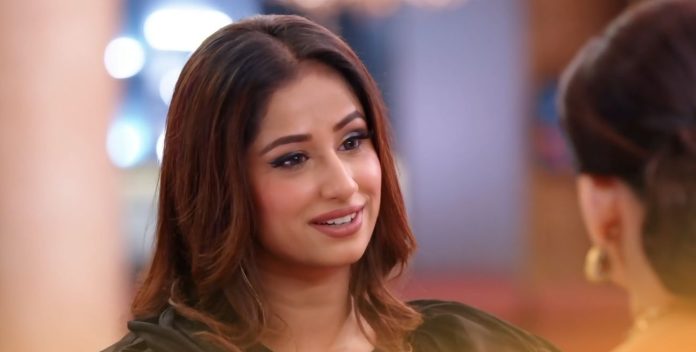 Bhagya Lakshmi episode spoiler – Malishka’s plan Lakshmi tells Rishi to run. The stones start breaking into pieces and fall on Rishi and Lakshmi. Aayush comes with the hotel owner and some men to rescue them. Rishi asks Aayush to help them fast. A stone hits Rishi’s leg hard and he shouts in pain. Lakshmi gets scared. Another stone comes at hits his head and Aayush shouts in frustration. Malishka comes to know that Rishi is trapped in the cave. An unconscious Rishi is tied by a wire and pulled up.

Malishka calls the journalists and says that they used to consider Lakshmi and Rishi a perfect couple but she broke their bubble. Shalu gives a reality check to Malishka and says that Rishi will fight with the entire world for Lakshmi. Rishi applies cream to Lakshmi. Malishka informs Kiran and Neelam that Lakshmi’s story will come in the papers about a greedy bride. Malishka reads the newspaper in shock.

Meet episode spoiler – Harshvardhan to get arrested?:
Mr. Meet cries and silently informs Mrs. Meet that the pen drive needs to be hidden and should not get into anyone’s hand. Hawa Singh tells Mrs. Meet that according to the F.I.R registered by her he orders her to arrest her father’s killer Harshvardhan Ahlawat. Harshvardhan, Mr. Meet, and Babita are in shock. Mrs. Meet becomes emotional and says that it cannot be true.

Mithai episode spoiler – Mithai prepares Aloo Jalebi:
Girish informs everyone that a tempo containing sweets coming from Agra has met with an accident. Mr. Agrawal and his son pay a visit to Chaubey house and tell Girish that if he had come to know yesterday he would have sent his whole staff for them. Keerti and Mithai prepare Aloo Jalebi but Girish says that their efforts are futile. Mithai prays to save Hari Mohan’s name. Shubham offers Hari Mohan to check on the sweet but he finds it stale.

Tere Bina Jiya Jaye Na episode spoiler – Jaya’s shocking solution:Devraj asks Jaya till when they can stay in the palace and she replies that they have only 48 hours and if Aarav is not found then he will be declared as an absconder. She says that the palace will be snatched from them. Devraj asks Jaya for a solution and she says that there is only one way out. She says that if he wants to save Ambikapur’s throne then he will have to leave Krisha. Devraj is shocked.

Jeeto’s brother comes to speak to Kulwant and she asks him not to give her the police threats as she can remove his eyes out. She points a gun at him. Jeeto comes in between and asks her to shoot her. Jeeto and Kulwant have a shuffle and the gun gets shot by mistake. Jeeto is shot and her blood splashes on Kulwant’s face. Everybody gets alarmed.