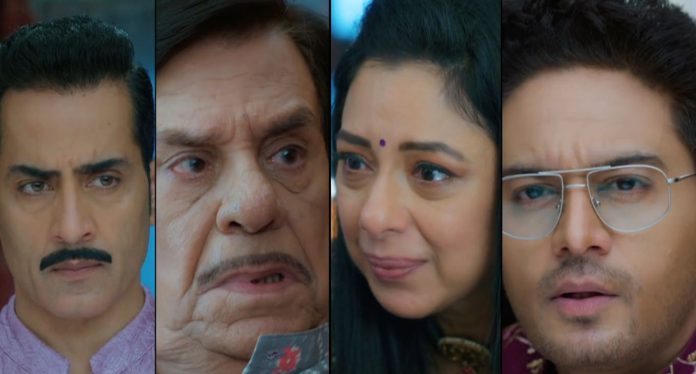 Anupama 12th May 2022 Written Update Wedding bells Anupama runs to the terrace and recalls Vanraj accusing or blaming her and Anuj’s wedding for Bapuji’s worsening health. She cries profusely recalling her last few days with Bapuji. Anupama also recalls Bapuji doing her manicure and grows more guilty. Anuj comes to the terrace and finds Anupama crying profusely. Anupama sees Anuj near her and hugs him tightly. Anuj tells Anupama that not she alone but both of them together are the reason behind Bapuji’s condition. Anupama asks what kind of daughter she is, who failed to see or understand that her father is in so much pain.

She says she failed to see her father’s pain hidden behind his smile/joy in the happiness of her own wedding. Anupama says she should have understood Bapuji’s pain, being his daughter. Anuj tells Anupama that they failed to see Bapuji’s pain because he never told them. Anupama says it must have been very difficult for Bapuji to smile in pain, in front of everyone. She asks why Bapuji hid his pain from her or everyone. Anuj tells Anupama that she knows the answer to this question better than him, because she is a mother to 3 children. He tells Anupama that Bapuji did what other parents would do for their children. Anupama asks Anuj who does the way Bapuji did?

She also asks who risks his/her life for a wedding. Anupama says the wedding could have taken place tomorrow, next month or a couple of months later. She asks what if something dangerous could have happened to Bapuji. Anupama says she couldn’t have forgiven herself even if she wanted to. She tells Anuj that it was Bapuji, who always motivated her, understood her feelings even before her, and encouraged her. Anupama says Bapuji is her strength and everything. She tells Anuj that she took time to become Bapuji’s daughter, but Bapuji treated her like a daughter, the day she entered Shah house. Anupama says Bapuji never let her feel the lack of or miss her father after her marriage.

She also says that Bapuji stood by her against his own son (Vanraj). Anupama again blames herself for Bapuji’s condition. Anuj requests Anupama to stop crying as she even has to handle her children and the Shah house. He wipes Anupama’s tears, telling her that Bapuji needs them and they need to encourage him and be his strength. Anuj tells Anupama that the entire life is there to feel guilty and to break down. He also tells Anupama that it’s the time to hold things together, rather than breaking down. Anuj asks Anupama to not worry as their marriage can be postponed/delayed, as it already got delayed for so many years. He tells Anupama that they need to focus on Bapuji’s health and surgery as it’s more important.

Anuj asks Anupama to not think about any other thing. Anupama and Anuj run downstairs on Paritosh’s or Samar’s worried call. They reach inside Bapuji’s room. Anupama holds Bapuji’s hand and apologizes to him, for not being able to feel/see his pain even being his daughter. Vanraj and Baa feel angry. Anupama angrily asks Bapuji how he could hide his pain and illness from everyone. She also asks Bapuji how he thought that her wedding is more important than his life. Anupama further asks Bapuji who is he to make such a decision. She asks Bapuji, what if something would have happened to him. Anuj tells Bapuji that their happiness lies with him, not without him.

Downstairs GK tells everyone that he tried talking sense into Bapuji but he didn’t pay heed to his words. GK says that Bapuji persistently wanted Anuj and Anupama to get married. Malvika caresses GK and tells him that he would have done the same, if he would have been in Bapuji’s place. Kanta says a father always makes sacrifices for his daughter’s happiness. She says Bapuji loves Anupama so much that he didn’t even care for his own life. Even Rakhi seems emotional. Devika says till now she had only heard that parents sacrifice their own life for their children’s one smile and today she saw such in real life.

On the other hand, Bapuji tells Anupama that he should be the one apologizing, not her. Anuj tells Bapuji that they (he and Anupama) are at fault as their wedding is the reason behind his worsening health condition. Bapuji says he is at fault as he couldn’t keep the promise he made to his daughter. He says he wanted to bid a happy farewell (bidaai) to Anupama but instead made her cry. Bapuji blames himself for ruining Anuj and Anupama’s sangeet ceremony. Anupama requests Bapuji to not make her feel ashamed. Bapuji tells Anupama that he tried a lot, but his old body didn’t support him. Baa feels angry.

He apologizes to Anupama for hiding about his worsening health from her. Bapuji tells Anupama that he would have told her about his worsening health to her after her wedding. Anupama tells Bapuji that she and Anuj will marry each other only when he (Bapuji) will get completely fine. Bapuji says no. Baa angrily asks Bapuji to stop his reckless act. She also asks Bapuji to worry about his own health. Baa tells Bapuji that he, neither seen nor heard anything else apart from Anupama’s wedding. She asks Bapuji if he ever thought what will happen to her, Vanraj and family, if anything happens to him. Baa tells Bapuji that they accept that he is the eldest in the Shah house and makes decisions. She says this doesn’t mean that they will agree to everything he says.

Baa asks Bapuji whether she and Vanraj have any claim/ right on him or not. She tells Bapuji that they have listened to him for long enough but no more. Baa tells Bapuji that now they won’t listen to him anymore. Vanraj tells Bapuji that he had a discussion with the doctor. He also tells Bapuji that first his test reports will be seen and then he will get admitted to the hospital this evening. Vanraj further tells Bapuji that he requested the doctor to begin his surgery as soon as possible. Anuj and Anupama tell Bapuji that it’s the right decision as he should get treated first, which is most important right now. Bapuji refuses to go anywhere or get treated before Anupama and Anuj’s wedding takes place. This shocks everyone.

Bapuji asks Baa if she thought that she and Vanraj could make him do whatever they want. He declares that he won’t die or go to the hospital, till Anupama gets married to Anuj. Baa angrily asks Bapuji if Anupama’s marriage matters more than his life. Bapuji says yes, Anupama’s marriage matters more to him than his own life. He says there is no greater honor for a father than giving away his daughter to another family (Kanyadaan). Bapuji tells Baa that his life means nothing in comparison to Kanyadaan. Anupama requests Bapuji to not say this and get treated for her sake. Anuj requests the same. Bapuji says he will get treated, only after Anupama will leave Shah house with Anuj, by getting married to him.

Baa asks Bapuji if only Anupama matters to him, not she and Vanraj. Vanraj requests Bapuji to not be stubborn and get treated but Bapuji refuses. Anupama threatens Bapuji that she and Anuj won’t get married, if he won’t go to the hospital for treatment. Bapuji tells Anupama that he won’t return alive from the hospital, if he will go to the hospital before her wedding. Bapuji’s words shock and scare everyone. Rakhi says hats off to Bapuji. She says parents act stubborn only when it’s about their children. Rakhi tells everyone that once parents act stubborn, even god can’t convince them. She says she is a mother too and can understand Bapuji’s stubbornness very well. She says even she can go to (cross) any limits for her daughter, just like Bapuji.

On the other hand, Bapuji says he will pray for his death from god, if anyone will take him to the hospital against his will. This shocks everyone. Anupama and Anuj ask Bapuji if he thinks that they would be able to marry each other seeing him in this condition. Anuj and Vanraj both request Bapuji to leave his stubbornness. Bapuji remains adamant and says he will fight to the death for 2 days for Anupama’s wedding. He says even death can’t take him before his daughter gets married. Bapuji says whatever doctor says, but his belief says that nothing will happen to him till Anupama gets married. He promises Anupama that he will go to the hospital right after her wedding.

Anupama keeps her hand on Bapuji’s mouth. Bapuji tells Anupama that he will feel better if she agrees. Everyone gets teary eyed. Anupama asks Bapuji to promise her that he will take full care of himself and won’t stress himself even a little, till her wedding gets completed. Anupama angrily tells Bapuji that he won’t do any work, hustle or get excited. Bapuji agrees to Anupama’s instructions and promises her. Anuj asks Bapuji to promise that he will not hide his pain or hardship from him, this time. Bapuji agrees and makes a promise to Anuj and Anupama. Bapuji asks everyone to get to work as tomorrow is Anupama and Anuj’s wedding.

He says he wants happiness on everyone’s face. Bapuji says everyone should seem happy, laughing, smiling and dancing as it’s his daughter’s (Anupama’s) wedding. He puts Anupama’s hand in Anuj’s hand. This makes Baa and Vanraj angry. Later, GK apologizes to Anupama for hiding about Bapuji’s worsening health. He gives the doctor’s prescription to Anupama and tells her that the doctor said that Bapuji must not miss any dose. Anupama asks GK to rest assured as now she will take care of Bapuji’s medical routine. GK tells Anupama to fulfill Bapuji’s wish as in this age only hope can keep a person alive. He tells Anupama that her and Anuj’s wedding is Bapuji’s one hope.

In the next episode, Anupama and Anuj will seem excited to become, “Mrs. Anupama Anuj Kapadia and Mr. Anuj Anupama Joshi”, respectively. On the other hand; Dolly, Samar, Paritosh, Pakhi and Kinjal will meet Baa and Vanraj. They will fold their hands and request them to attend Anuj and Anupama’s wedding. They will even say that they won’t ask them for anything after this. Baa and Vanraj will seem worried, irritated and confused.

Reviewed Rating for Anupama 12th May 2022 Written Update Wedding bells: 5/5 This rating is solely based on the opinion of the writer. You may post your own take on the show in the comment section below.